With a broken circadian clock, even a low-salt diet can raise resting blood pressure, promote disease 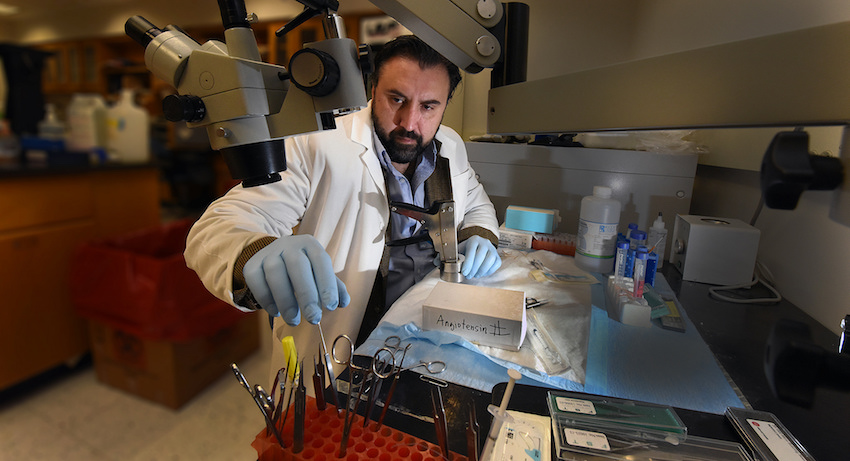 AUGUSTA, Ga. – In the face of a disrupted circadian rhythm, a low-salt diet and a hormone known to constrict blood vessels have the same unhealthy result: elevated resting blood pressure and vascular disease, scientists report.

Sleep disorders, shift work, disease, even aging may be signs of or triggers for clock dysfunction that increases the risk for hypertension and blood vessel disease, and now scientists in the journal Hypertension show that even a low-salt diet can have an unfortunate synergy with a dysfunctional clock.

“Circadian rhythm is the daily rhythm in our bodies, and probably the most well-known is that of waking and sleeping,” said Dr. Daniel Rudic, vascular biologist in the Department of Pharmacology and Toxicology at the Medical College of Georgia at Augusta University. While complex molecular networks actually regulate the rhythm, the daily cycle of daylight to dark resets the clocks, which plays a role in organ function throughout the body.

Sleep or rest time is when our 24-7 organs should get at least a bit of a break. It also appears to be a time circadian dysfunction can be silent and dangerous. “Blood flow to your organs is going to change when you are sleeping,” Rudic said. “Your heart rate is going to decrease. One well-known observation is that the blood pressure exhibits a circadian rhythm.” When resting blood pressures don’t drop as they should, it’s called nondipping.

“Our data suggests that low salt does what it should do in a normal mouse: it lowers blood pressure. But when we fed a low-salt diet to a mouse that had a circadian dysfunction, basically a sleep disorder, low sodium actually causes this nondipping blood pressure and vascular disease,” Rudic said.

A low-salt diet is known in humans and animals to stimulate the renin-angiotensin-aldosterone system, which helps regulate blood pressure by prompting blood vessel constriction and holding onto fluids in the body. That system is the target of several existing blood pressure medications. While the why is not completely understood, low salt’s triggering of the system may result from the body working to ensure an adequate blood pressure when there is so much less salt available, Rudic said. He notes that mice typically don’t consume anywhere near the amount of salt most humans do and that he’s not suggesting most of us abandon a low-salt diet.

Rather, while much work remains, the take-home message at this juncture is that in the ongoing struggle to control hypertension, which occurs in about half of patients, a 24-hour blood pressure check may reveal previously hidden nondipping and enable more targeted, effective treatment, he said.

In the studies, mice with one of their circadian rhythm genes, called Period isoform, knocked out had essentially the same blood pressure as mice with the gene. When Rudic’s team gave the vasoconstrictor, angiotensin II, to the mice, not surprisingly, their blood pressure stopped the healthy dipping at rest and vascular disease accelerated.

On a low-salt diet, normal mice had the expected drop in blood pressure. However the Period isoform knockouts experienced the surprising nondipping blood pressure. In the case of the nocturnal mice, the dipping should have occurred during the daylight hours. Chronic consumption of a low-salt diet also caused their blood vessels to become narrowed and diseased. When scientists gave a drug that targets the renin-angiotensin-aldosterone system, it resolved the nondipping problems.

“Even though we can’t currently directly target the circadian clock, clearly you can fix aspects of what the clock is influencing with antihypertensive medication,” Rudic said. The optimal time of day for giving blood pressure medication to patients with signs of circadian clock dysfunction also needs further study, he said.

The scientists noted that the blood pressure in the normal and knockout mice was essentially normal without angiotensin or the low-salt diet, another surprise at least in the knockouts.

In humans, nondipping blood pressure is estimated as high as 45 percent and even higher – 53 percent – in patients being treated for hypertension.

In 2009, Rudic showed that in the blood vessels the circadian clocks regulate key signaling that enables them to dilate and remodel. He also reported in the journal Circulation that mice with mutated or missing clock genes were prone to vascular disease similar to smokers and people with high blood pressure and cholesterol.

The research was funded by the National Heart, Lung, and Blood Institute and the American Heart Association.  Dr. Paramita Pati, a 2015 doctor of pharmacology graduate of Augusta University who is now a postdoctoral associate at Yale University, is the first author.