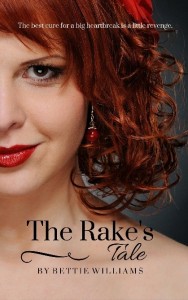 Set in Regency-era England, “The Rake’s Tale” depicts the story of Sarah Edwards, a Shakespeare-obsessed debutante who falls in love with a particularly cruel man-about-town. After having her heart broken, Edwards sets out on a mission of revenge only to find herself falling for someone new: a duke with an irritating penchant for making things right.

Set on out-raking the rake who destroyed her and beset by a new and intriguing love interest, Edwards must make the toughest decision of her life: Will she seek revenge or chase happiness ever after?

Williams, a former journalist, has been previously published in several literary anthologies. She holds dual baccalaureate degrees from the University of South Carolina Aiken and is a member and former president of the Aiken Chapter of the SCWW.

“The Rake’s Tale” is currently available in paperback and Kindle E-book format via Amazon, Barnes & Noble as well as various other retailers.