Will this student’s honors thesis become a Netflix pilot? She’s working on it 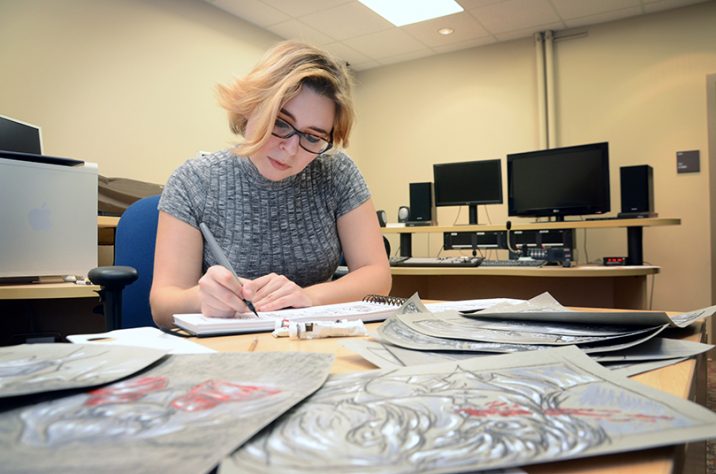 As she rode the bus back to her hometown for the first time in 17 years, Cora Phelan was at a crossroads. Would the 34-year-old finally confront her painful past and stay in town or let it go for good and never come back?

When she arrived at the old white-and-blue bus stop, she saw how much the town had changed. Old stores and restaurants closed. New businesses opened. New roads were built.

In some ways, though, everything still looked familiar. The cicadas sang just as loud. The azaleas still colored the landscape. The iconic Catholic church with its big stained-glass windows still stood there.

Now Cora was back to claim her late grandmother’s estate. She would soon have to decide whether to keep the house where she grew up with her grandma or sell it and never look back.

Would she overcome the pain of having her life derailed by a sex trafficker? How would she feel when she faced the investigator who failed to find her captor?

“I like the idea of having to be called back into your past,” said Cynthia Panzella, a communication and music double major in the Pamplin College of Arts, Humanities, and Social Sciences, who wrote a 90-page pilot for this TV drama as her honors thesis. “We all have regrets, and when someone passes, we always think of the things we should have done.”

Drawing inspiration from her own memories of her late grandma and from her hometown of Augusta, Panzella created a dark drama with a touch of buddy film about a sex trafficking survivor who is trying to find meaning and purpose in life. The story also follows her relationship with an investigator who failed to catch the suspect in her case but is trying to redeem himself.

“It reminds me a bit of David Lynch’s film Blue Velvet from 1986 in that it’s a very particular portrait of the South, and it is also a bit of a noirish mystery,” said Matthew Buzzell, an associate professor of communication and Panzella’s thesis adviser for this project.

Panzella’s solid work landed her a spot to present her project at the 53rd National Collegiate Honors Council Conference in Boston in November. Once she’s done writing the first season, she also wants to pitch her series to a streaming service like Netflix.

“That would be the dream for sure,” she said. “Especially with Netflix original series or streaming, people want more realism. They want more natural worlds — people living more natural lives in settings they can relate to.”

And that is why, with Buzzell’s help, Panzella brought part of her world into the story.

“Professor Buzzell said, ‘Write what you know.’ I said, ‘Well, I know the South, and the way I think of Augusta in the ‘90s seems like a perfect setting for such a story,’” Panzella said. “I wanted to capture that in the story because it’s part of who I am.”

The storyboard art in Panzella’s screenplay is influenced by another part of who she is: an admirer of manga, the Japanese-style graphic novels. In fact, her love for manga is what led her to where she is.

Because of that passion, she knew she couldn’t miss a study abroad trip to Japan in 2015 — a trip that was part of Buzzell’s Japanese cinema course.

“[The course] sparked an interest in film within her,” said Buzzell, a Northwest Regional Emmy-nominated filmmaker. “The best part for me is always to see that spark within a student. Cynthia certainly has that.”

After the trip, Panzella, who was a music major, decided she also wanted to study communication.

It turned out, Panzella also had a talent for cinematography.

“It’s always great when you can identify students’ talents and you can help encourage them and maybe guide and mentor them in some way,” Buzzell said. “Cynthia has many diverse interests within the creative arts. It’s always interesting to see what she’s going to be working on next.”

Panzella’s dedication to the new field eventually led to her acceptance into the honors program and to her work on this series pilot as her honors thesis.

“I’ve always wanted to tell stories and create stories, so it was nice to be able to write this world, create all these characters,” she said. “To just bring an idea to fruition and to see it printed, it’s nice.”

Ironically, what started with a trip abroad brought her right back to Augusta.

“I like having gone to other places because I can see them as something real and tangible and see people’s lives. And by doing that when I come back I can say, ‘Oh, there is something special,’” Panzella said. “I think it’s interesting to find the newness in where I am from. It’s not just a point of beginning, but it can be a place to come back to and find anew by having left.”