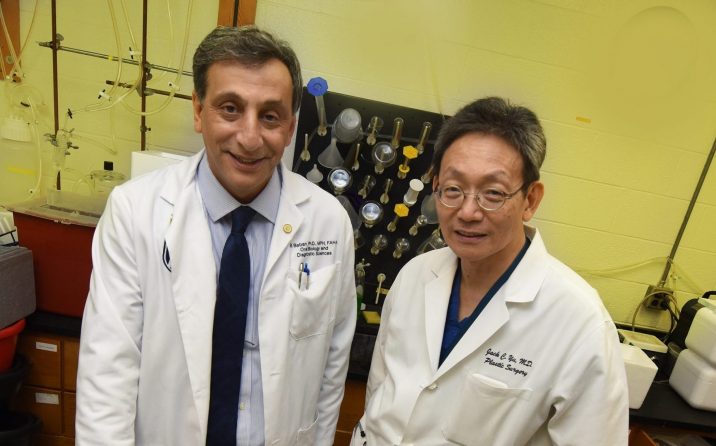 In the face of diabetes, a common condition in which glucose and levels of destructive inflammation soar, whole body vibration appears to improve how well our body uses glucose as an energy source and adjust our microbiome and immune cells to deter inflammation, investigators report.

For the first time they have described how regular use of whole body vibration can create this healthier mix by yielding a greater percentage of macrophages — cells that can both promote or prevent inflammation — that suppress rather than promote.

In their mouse model, investigators at the Medical College of Georgia and Dental College of Georgia at Augusta University have also shown that whole body vibration alters the microbiome, a collection of microorganisms in and on our body, which help protect us from invaders and, in the gut, help us digest food.

Changes they saw included increasing levels of a bacterium that makes short chain fatty acids, which can help the body better utilize glucose, they report in the International Journal of Molecular Sciences. Glucose is used by the body for fuel but at high levels promotes inflammation, insulin insensitivity and ultimately can cause diabetes.

While there were other changes, the most dramatic they documented was the 17-fold increase in this bacterium called Alistipes, a gut bacterium not typically in high supply there but known to be proficient at making short chain fatty acids which, in turn, are “very good” at decreasing inflammation in the gut, says Dr. Jack Yu, chief of pediatric plastic surgery at MCG. Alistipes, which helps ferment our food without producing alcohol, generally improves the metabolic status of our gut and makes us more proficient at using the glucose we consume for energy.

When they saw this, co-corresponding authors Yu and Dr. Babak Baban, immunologist and interim associate dean for research at DCG, immediately thought that giving a dose of the bacterium, like you would a medication, with a smaller dose of whole body vibration — in this case 10 minutes versus 20 minutes five times weekly — might work just as well, and it did, they report.

It what appears to be this good chain reaction, when Alistipes went up, glucose use and the macrophage mix also improved, Baban says. “The sequencing is not yet completely clear,” Yu says, “But it appears to be a closed loop, feed forward, self-magnifying cycle.”

Our microbiome, like a casserole, is in layers and one way whole body vibration may work is by rearranging those layers, Baban says, but they reiterate that no one is certain just how whole body vibration works in this or other scenarios, like as an exercise mimic without all the proactive movement.

But it appears to help address a key concern in diabetes and many common diseases: inflammation. While acute inflammation helps us fight disease, chronic inflammation helps start and sustain a variety of diseases from cardiovascular problems to cancer as well as diabetes.

With rates of inflammation-producing obesity and related type 2 diabetes increasing — even in children — new therapies that can directly help avoid the health consequences are needed, they write. They add that while more work is needed, whole body vibration might be one widely applicable and generally safe approach to use.

In Baban and Yu’s mouse model of type 2 diabetes, where circulating glucose levels are high, they wanted to know how whole-body vibration affected the inflammatory status of macrophages and the diversity of the microbiome. They theorized their diabetes model would have more M1s, and that whole body vibration would result in more M2s and yield changes in the microbiome as well.

They found both a significant increase in the number of M2s as well as increases in levels of other anti-inflammatory molecules like the cytokine IL-10, in both normal mice and their diabetes mouse model after vibration. In fact, whole body vibration restored M2 levels to that of normal controls.

In the microbiome, they saw numerous shifts but by far the most significant was the increase in Alistipes and a general decrease in the diversity of the microbiome.

They note that while more diversity is generally considered a good thing, in this case the shift likely resulted from an increase in species like Alistipes, which can produce short chain fatty acids like butyrate, which result from the fermentation of dietary fiber in our gut and which feed inhabitants of the microbiome, are highly anti-inflammatory and can help reverse ill effects of high-fat diets, they write.

Theirs is the first study to document crosstalk between the microbiome and innate immunity by altering the macrophage mix with whole body vibration. Innate immunity is a sort of basic defense that immediately responds to invaders in the body and includes physical barriers like the skin as well as immune cells like macrophages, which are key to this response.  In this scenario, macrophages, for example, release other cells called cytokines that help trigger inflammation. Adaptive immunity is when the body makes a specific cell, like an antibody, to target a specific invader.

They note that it’s still impossible to know whether the microbiome or macrophage shift comes first but theorize that making more glucose available to macrophages fosters inflammation and insulin resistance.

Another experiment they want to do to better define the order, is to delete the macrophages and see if they still see the other effects, Baban says.

But either way, the investigators say the clear interaction provides more evidence that whole body vibration can turn down inflammation.

The microbiome lives in the mouth, gut, vagina and skin — mostly in the gut— at points where our body comes in contact with foreign items to help protect us from invaders. In the gut it helps us digest and use our food.

Scientists have found more than 8 million genes represented in the bacteria, fungi and viruses that comprise a healthy human microbiome while the human himself has more like 20,000 to 25,000 genes. Obesity has been associated with a less-diverse microbiome, which is actually more efficient at digesting food.

In diabetes, whole body vibration is known to reduce ill effects like excessive urine production and excessive thirst, Yu reported in 2012 to the Third World Congress of Plastic Surgeons of Chinese Descent. That work was in a mouse model, which mimicked overeating adolescents. Vibration also reduced inflammation levels, including shifts in some immune cell levels. Vibration also was better than drugs at reducing A1C levels, which provide a better idea of your average blood sugar levels than a fasting glucose by showing what percentage of your oxygen-carrying hemoglobin is routinely coated with sugar. High glucose, or blood sugar levels, may result in sugar binding to cells and other places inside the body where it can alter function.

“Hyperglycemia is not good,” says Yu. “When it happens you perturb the normal.”

While Alistipes, which does not survive well outside the body, is not currently a part of probiotics or even yogurt cultures, for these studies the investigators used levels of other bacterium, like lactobacillus, found in yogurt to determine how much to give when they tried the Alistipes as a  medicine adjunct to whole body vibration.

Alistipes is found in plants, and levels have been shown to be decreased in individuals with inflammatory bowel disease and Crohn’s. Higher levels have been associated with depression, and high levels can be found in the gut of hibernating bears.

A 2017 study published in Endocrinology by Drs. Alexis Stranahan and Meghan E. McGee-Lawrence at MCG provided evidence that in their animal model of obesity and diabetes, whole body vibration was essentially the same as walking on a treadmill at reducing body fat and improving muscle and bone tone, including reducing seriously unhealthy fat around the liver, where it produces damage similar to excessive drinking.