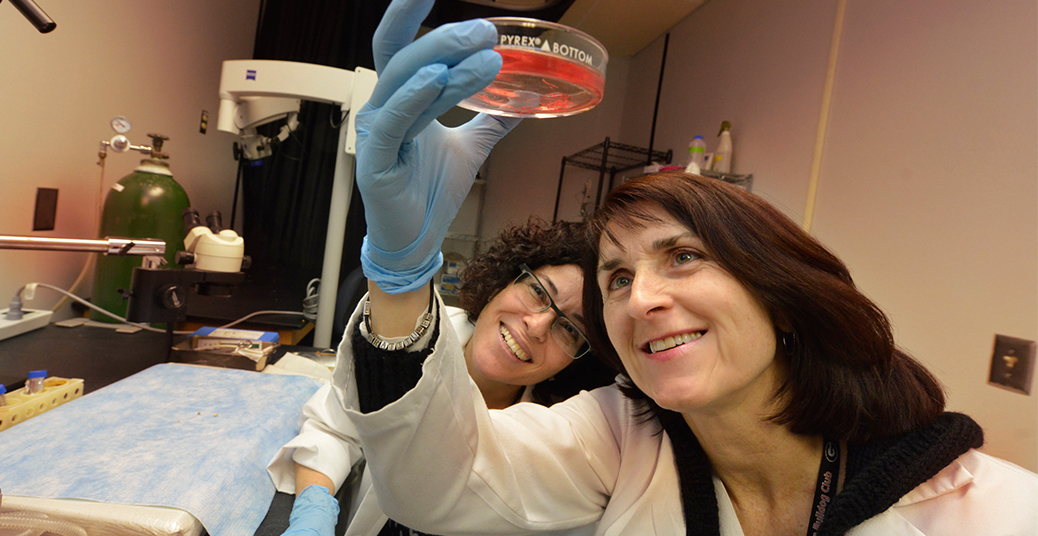 To maximize stroke recovery, researchers may want to focus more on ways to support the side of the brain where the injury didn’t occur, scientists report.

“Most studies focus on the stroke area and ways to limit damage in that area,” said Dr. Adviye Ergul, vascular physiologist at the Medical College of Georgia at Georgia Regents University. However, Ergul and collaborator Dr. Susan C. Fagan, stroke pharmacist at MCG and the University of Georgia, are among a growing number of scientists finding that while the opposite side of the brain may not have directly experienced a stroke, its ability to aid the injured side is affected.

That aid includes endothelial cells that line blood vessels on both sides of the brain releasing growth factors – primarily brain- derived neurotrophic factor and vascular endothelial growth factor – which protect neurons, help ailing ones recover, and prompt the growth of new blood vessels to the stroke site, which is screaming for blood and oxygen. All this activity also attracts endogenous stem cells so, even if the new blood vessels never actually carry blood, they help create what scientists are calling a “regenerative niche” that can minimize stroke damage.

The uninjured side benefits as well with a boost of growth factors and maybe even more blood vessels, possibly readying itself to take on more responsibility. “It’s still unclear what that hemisphere is really doing,” Fagan said. “Some people think it’s just suppressing abnormal neurons firing in the damaged area. We think it’s more active recovery.”

The emerging topic is the focus of a Feb. 11 session of the American Heart Association International Stroke Conference in Nashville this week. Fagan, Assistant Dean for the UGA College of Pharmacy campus at GRU and Director of MCG’s Center for Pharmacy and Experimental Therapeutics, is moderating the session and Ergul is presenting on vascular changes. The scientists, who asked the AHA to include a session this year focusing on the uninjured side of the brain, were the first to report vascular changes in the opposite hemisphere following a stroke.

“We know that blood vessels react a lot to the injury in distant parts of the brain,” Ergul said. “Within a few days of a stroke, the non-damaged side becomes more active and starts taking up, we think, some of the functions of the damaged side,” Fagan said. “If you do functional MRIs in humans, you can see other hemispheres starting to light up more in the recovery phase within a few days of stroke.”

Patients with diseases such as hypertension and diabetes are at particular risk for stroke and poor stroke recovery because their vascular system already has lost some of its innate ability to protect itself. In the unique domain of the brain, that includes maintaining super-tight control over blood flow. “Blood vessels contract to regulate the flow,” Ergul said. “What we are seeing in diabetes and hypertension is, for a while, they try to compensate, but they lose the ability to sense the pressure and regulate blood flow.”

Without that ability, blood vessels will continue to dilate, increasing leakiness and bleeding into the brain. Additionally, tiny vessels upstream sense what’s happening and contract, further reducing blood and oxygen supplies to the already fragile stroke area. “That is why it is so important to regulate the function and also the new blood vessel formation to generate this nutritive environment,” Ergul said.

Also at the meeting, recent GRU graduate Dr. Maha Coucha will be presenting one of their early pieces of evidence that the uninjured side is a player. They’ve found that increasing expression of a powerful antioxidant, the enzyme superoxide dismutase, in the uninjured side of a rat stroke model enables blood vessels on the injured side to better control blood flow. Superoxide dismutase is a naturally occurring antioxidant that can neutralize reactive oxygen species, which are produced in abundance before and after stroke, and can directly kill cells and/or cause them to commit suicide.

“We know that any improvement is due to manipulation to the other side and, when we do that, the stroke injury is limited, and the outcome is better,” Ergul said.

The team is also pursuing studies of an experimental drug that appears to upregulate the protective mechanisms of the opposite side, including helping restore control of blood flow, increasing production of neurotrophic factors, and creating new blood vessels, by manipulating the angiotensin receptor system.

Blood vessels in both sides of the brain definitely communicate and are literally connected, starting out at the Circle of Willis at the base of the brain, then feeding up into the right and left sides of the brain. Fagan and Ergul note that the remote impact they are seeing in stroke likely also is a factor in traumatic brain injuries, brain hemorrhage, and even brain tumors.