Second Lts. La’Chelseia Allen, Jonah Cali and James Dresser all said being able to participate in the United States Army’s National Commissioning Ceremony on Friday, June 12, was an honor and privilege.

The three Augusta University graduates were among the more than 1,000 cadets nationwide to participate in the ceremony, which was streamed online on Facebook and YouTube.

The United States Army Cadet Command conducted the commissioning ceremony. Cadets have completed the requirements to become second lieutenants, and being selected to participate in the ceremony is a prestigious honor. During the ceremony, the cadets are required to cite the Oath of Commissioned Officers.

“At the end of the cadets’ time in ROTC, they will have the honor of being commissioned into the Army, a pivotal point in any soldier’s career,” said Master Sgt. Travis Logan, a senior military instructor at AU. “The commissioned officer oath has existed since the times of the Continental Army, but was changed a number of times. Finally in 1959, the oath received its current form.

“Reciting the oath is a rite of passage. It swears your allegiance to the Constitution of this great nation; not to any person or government entity. It’s what makes our country unique — that we put allegiance in a piece of paper that represents the democratic republic ideals that this nation was founded upon.”

Logan had high praise for the three cadets, saying Allen “is a resilient leader and very family oriented, highly motivated, organized and always mentors anyone in her presence.”

Cali is an “outstanding leader, marksman and fitness motivator. He accepts any challenge and excels alongside his team without hesitation. He also was very instrumental in our recruiting efforts and our organization has increased dramatically by his hard work to getting out in the AU footprint and talk about our program.”

And Dresser is “a dedicated leader. His dedication to lead as well as follow has set him apart from his peers. He strongly believes in the smarter not harder mentality. He always encourages others to be better every single day.”

Allen, who is majoring in psychology, is originally from Sparta, Georgia, and comes from a military family. She has been balancing her school and military work along with her responsibilities as a wife and mother of a 4-year-old daughter.

“This has been a tough challenge, but I feel it was worth it because I have overcome a lot, especially not knowing if I was going to do the Army life, but then realizing this is something I want to do,” said Allen, 27. “Being able to participate in this ceremony is an honor because I’ve worked very hard to get to this point and it’s nice to be honored nationwide.

Allen will do her training at Fort Sill, Oklahoma, and after graduating in December, she will be stationed at Schofield Barracks in Hawaii in the Field Artillery branch. She is appreciative of the impact Logan has had on her career at AU.

“He was our go-to person as cadre. He has guided me a lot and helped me understand what military life is like, what to do, how to do it … He was a big mentor for me.”

Cali, 22, also comes from a military family. He said he’s always wanted to join the military but decided to go to school to get a degree in political science, and along the way he joined ROTC.

Cali said there are a lot of responsibilities that come with being in the ROTC as well as his responsibilities from school. He said it took some time to adjust, but once he got a routine down, it came easily to him, especially after he received some guidance from his sister, 2nd Lt. Britny Gaudio, and her husband, 2nd Lt. Jacob Gaudio.

After the ceremony, he will be heading to Fort Benning, Georgia, to complete his training. Ultimately, he will be an in infantry unit.

“I’m honored to represent the university,” Cali said. “I was excited, obviously, to be on national television; being nationally recognized by the Secretary of the Army is an opportunity that you don’t get every day.”

Dresser joined the National Guard as an infantryman in 2015, when he graduated high school. He did his training at Fort Benning before he began serving in his National Guard unit. Afterward, he joined ROTC as an officer and then was contracted as a cadet in 2018, where he completed his training and moved to a Guard unit for cadets.

He graduated with a degree in accounting and was commissioned into the National Guard, where he will be an ordnance officer and have a civilian career.

Dresser credits his prior service and doing well at summer training in advance camp for his selection for the ceremony, but he said he was grateful he didn’t have to make the decision because “all of the cadets in our institute, we’re just outstanding cadets. How they would have made the decision to name just three is unknown to me because everyone in the program was just phenomenal.”

Dresser adds, “Just being able to go through all of the training with my classmates, sharing the same experience with them and everyone coming from different walks of life … but coming together and tackling these challenges. Forming those lifelong friendships has been awesome. And I’m also grateful for Master Sgt. Logan, Lt. Col. Danielle Rodondi … my commanding officers really went above and beyond, making sure that we understood what we needed to do and how to do it. They set us up for success in every area of training that we had. And I just want to thank them for that and wish them luck in their future endeavors.”

Logan said having three cadets being able to participate in the ceremony speaks volumes for Augusta University.

“It’s a great honor to represent Augusta University in this commissioning ceremony,” Logan said. “This event will show what great leaders AU ROTC produces to go into the world’s most lethal organization while also encouraging the future of the ROTC program.” 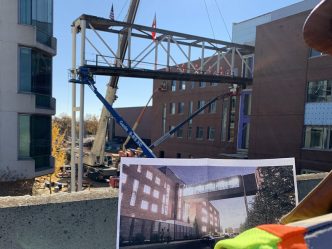 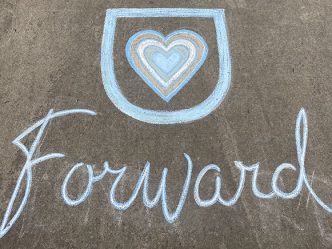