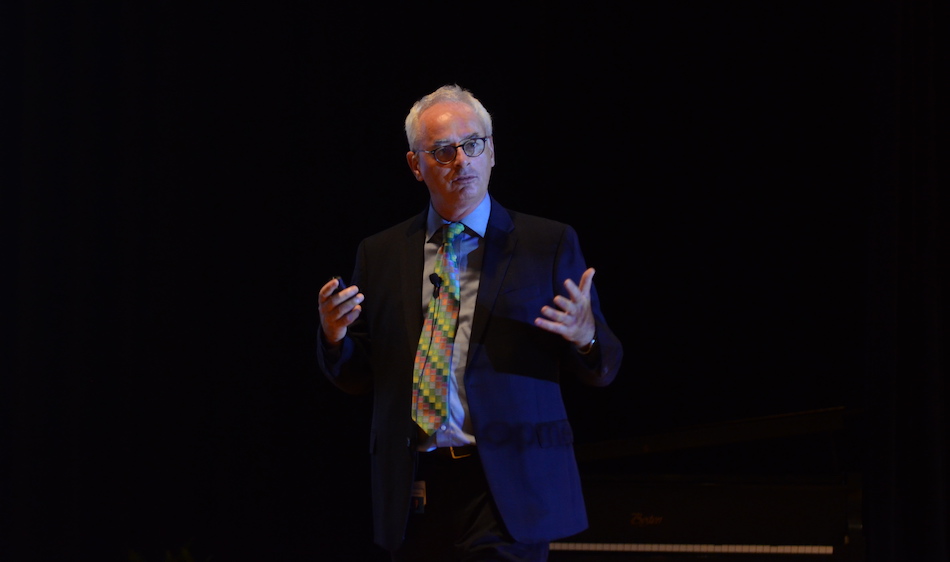 The state of MCG is strong, says Dean Buckley

The state of Georgia’s public medical school is strong, reports the 26th dean of the Medical College of Georgia at Augusta University.

Buckley walked the stage as he ran through the extensive recent list of accomplishments and the promising future for one of the nation’s first medical schools. He noted the ‘fantastic” achievement of a 200-percent increase over the last four years in underrepresented minorities among the classes of the 9th largest medical school enrollment in the nation.

“I am extraordinarily proud of all our colleagues in this concerted effort over the last number of years to achieve a staggering landmark at our medical school that any medical school across the country would be proud of,” Buckley said. “We are on our way to looking like and serving and improving the health of Georgians. I know because of these statistics and I know because I am looking at you and you look like the people of Georgia,” he told the packed room of students, faculty, staff, residents and other MCG supporters.

The preponderance of MCG students are from Georgia, and the medical school continues to have a strengthening presence across the state with a regional campus network that has students living and learning throughout. Live check-ins with those campuses during his talk exemplified the enthusiasm of Georgia hospitals and physicians who have committed to helping MCG educate the next generation. There were greetings from the foothills of the Appalachian Mountains and the Northwest Campus based in Rome, MCG’s newest campus, which just welcomed nine new third-year students who will be spending their clinical years in that region of Georgia.  Further south in Albany, home base of MCG’s oldest campus, the Southwest Campus, Dr. Sandra Mobley, campus assistant dean, said the framework was going up on new student housing.

The dean lauded again the Board of Regents and Chancellor of the University System of Georgia for parallel development of new residency programs at hospitals across Georgia to further complete the state’s offerings in medical education and further encourage students and residents to remain in the state to practice. Pipeline initiatives such as the nearly 50-year-old Student Educational Enrichment Program, or SEEP, continue to shore up the other end, helping inspire and prepare high school and college students for a career in medicine or other health sciences, he said.

The recent site visit to MCG by the accrediting body, the Liaison Committee on Medical Education, provided external endorsement for the extensive statewide medical education model, as well as enthusiasm for the education and facilities of the medical school’s home base in Augusta.

“They were quite frankly blown away by the new Harrison Building,” Buckley said of the facility, which opened to students in early 2015 and bears the name of the late 1948 graduate, famed vascular surgeon Dr. J. Harold Harrison.

Buckley also applauded state support for the medical school’s current $306 million budget, and continued efforts by faculty and staff for the medical school to generate more of its own income. Future efforts include improving the operations and financial performance of clinical facilities where faculty practice.

He noted Augusta University President Brooks Keel’s commitment to growing research initiatives as well, including expanding collaborations across colleges on the new university’s campuses. Buckley cited the pilot work of Carl Purdy, an instructor of music in the Pamplin College Department of Music with MCG researchers to study how and why music effects the cardiovascular system under stress. The dean also noted expanding, successful scientific collaboration with colleagues at the University of Georgia as well as scientists across the nation and world. The continued emphasis on research is translating to unprecedented research activity by medical students as well, Buckley also noted.

Continued recruitment of new leaders, such as Dr. Shelley Nuss, the new campus dean of MCG’s second, four-year campus in partnership with UGA, the AU/UGA Medical Partnership, and Dr. Michael Hocker, who came in July from Duke University as the new vice chair of clinical operations for the Department of Emergency Medicine and Hospitalist Services, bring even more opportunities, he said.

Buckley wrapped up on the high note of the rapid rise over the last five years in the percentage of MCG graduates who are happy with their medical education, a percentage that has now reached past the national average.

“I would say it’s the best school on earth,” third-year student Maryam Robinson said in one of several videos that aired during the State of the College address. “I would say it’s innovative, with its historic background, it still manages to be one of the most innovative institutions in my opinion…. It’s just a medical family. I love it,” said Robinson, who drew a spontaneous round of applause from the audience.

Buckley looked at the student who was sitting on the front row, “You can’t top that.”