‘The Adventures of Legoman’ now at the Byrd Gallery

Graduation day is just around the corner and many Augusta University seniors are feeling the pull of senioritis. Augusta art majors may be the exception, though. This group of seniors has worked hard to prepare and present exhibitions of their artwork as well as give public artist’s talks.

These exhibitions were a part of the senior capstone class and one of the final college requirements for art students.

One of these senior shows is currently on display at the Mary S. Byrd Gallery of Art. “The Adventures of Legoman” is an exhibition by Baillie Conway, senior art major with a concentration in sculpture and ceramics.

“The Adventures of Legoman” is a project that has been three years in the making and draws inspiration from a similar project by another artist.

“I found an article that talked about a guy that took a Lego mini figure and took photographs of it every day for a year in different locations,” Conway remembers. “I thought that was a really cool photography project. I was going to Walt Disney World later that week so I stopped by the Lego store and created a mini figure that I felt best resembled me. Then, I started shooting him around Disney. It’s just kind of grown from there.”

“In the images, I create miniature sculptures to fit in with Legoman,” he said. “So, when I was out in Hollywood, California, I made a plaster brick that had Lego man’s hand and foot prints in it and shot him in front of Grauman’s Chinese Theatre.”

“The Adventures of Legoman” showcases 54 of the best Legoman photographs.

“I tried to pick photographs that covered a wide range of areas where Legoman has been,” Conway said. “There are some photos from Disney, the Augusta National and some international travels. It’s a good reflection of where I’ve been.”

The exhibition features a wall installation that transforms a wall in the Byrd Gallery into large-scale Lego blocks and a projection featuring Legoman and the 2016 presidential candidates.

Conway’s senior exhibition has been the culmination of three years of hard work and seeing it come together was a reward.

“I usually see the photos on Instagram and Facebook, but seeing them physically hanging on the wall paired with the installations was a really cool moment,” he said. 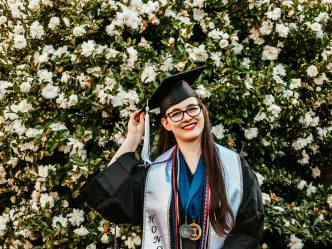 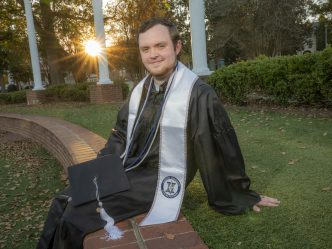 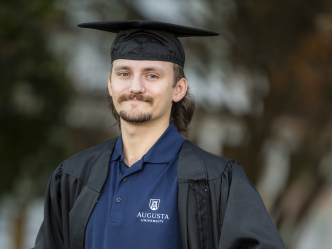 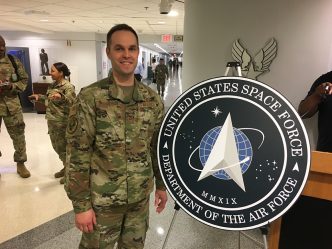