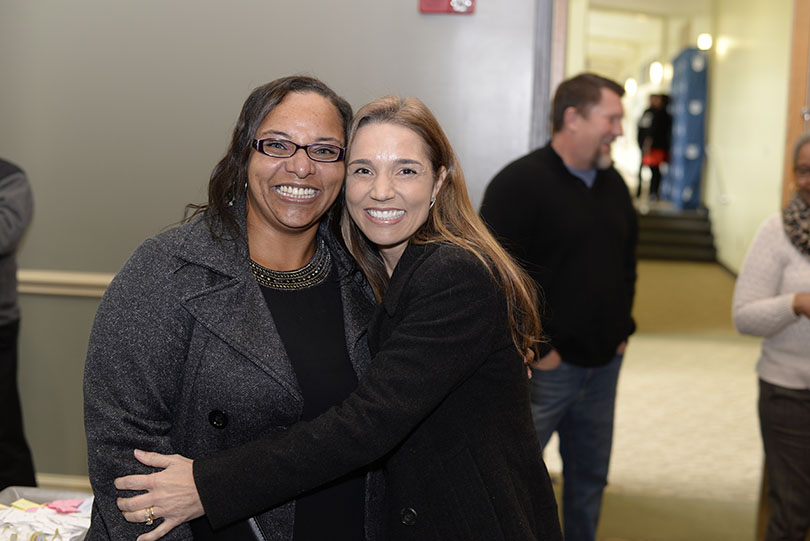 When she was 14, Kenya Alexander was at a crossroads. Her sister had recently been sent to prison, and Alexander, who was no stranger to trouble, was down to her last strike.

Alexander had a choice to make. Would she follow in her mother’s footsteps or use that last strike?

In the end, Alexander chose her mother’s path. Today, she graduated from Augusta University with a degree in criminal justice. She has already begun pursuing a master’s in public administration.

How did she turn her life around? Alexander gives the credit to Mrs. Murray, her former high school teacher.

Twenty-three years ago, Alexander and Jeanie Murray met for the first time. Alexander was a high school freshman and Murray was a first-year English teacher.

“There was just something special about her,” Murray said. “I can’t pinpoint what it was, but I just saw a drive and desire to persevere. I knew she had a bunch of obstacles. There was adversity to overcome, but she had to stay on track to graduate.”

With Murray’s guidance, Alexander was able to stay out of trouble.

“Long story short, I was about to get in trouble for the last time,” Alexander said. “I knew it was my last strike. Mrs. Murray just stopped me.”

After high school graduation, the pair kept in touch off-and-on. Alexander moved to Georgia, and Murray moved to Tennessee. Almost two years ago, Alexander visited Murray in Tennessee, and the friendship was rekindled.

“We have stayed in touch since then,” Murray said. “I have watched her overcome every obstacle you can imagine and still persevere. She is an absolutely incredible example. She really is my hero. I might have taught her for a year, but she has taught me more than I’ve ever taught her.”

As Alexander’s graduation from Augusta grew closer, Murray knew she had to be there, so she decided to surprise Alexander by attending.

“She was texting me yesterday to tell me the link so that I could watch her graduation online, and it was exciting knowing she had no idea,” Murray said.

Murray surprised Alexander on the morning of her graduation, at the Katherine Reese Pamplin College of Arts, Humanities, and Social Sciences graduation celebration. The surprise brought Alexander to tears.

Later, Murray felt proud to see her former student and now friend walk across the stage.

“I’m excited to see what God does with this degree,” she said. “She’s got an amazing passion for criminology, and she has dealt with a lot in her life. So, she has a really unique perspective that she’s going to bring to her job. Whoever she works for will be really blessed.”

After graduation, Alexander plans to pursue a career in the criminal justice field.

“I think my interest in criminal justice began with my mom,” Alexander said. “I really want to be an offender advocate. I think that’s my passion. I wasn’t the perfect person, but my life, my world and my heart is helping people.”

One day, Alexander would like to own a group home for at-risk youth. But her ultimate goal? Be someone else’s Mrs. Murray.