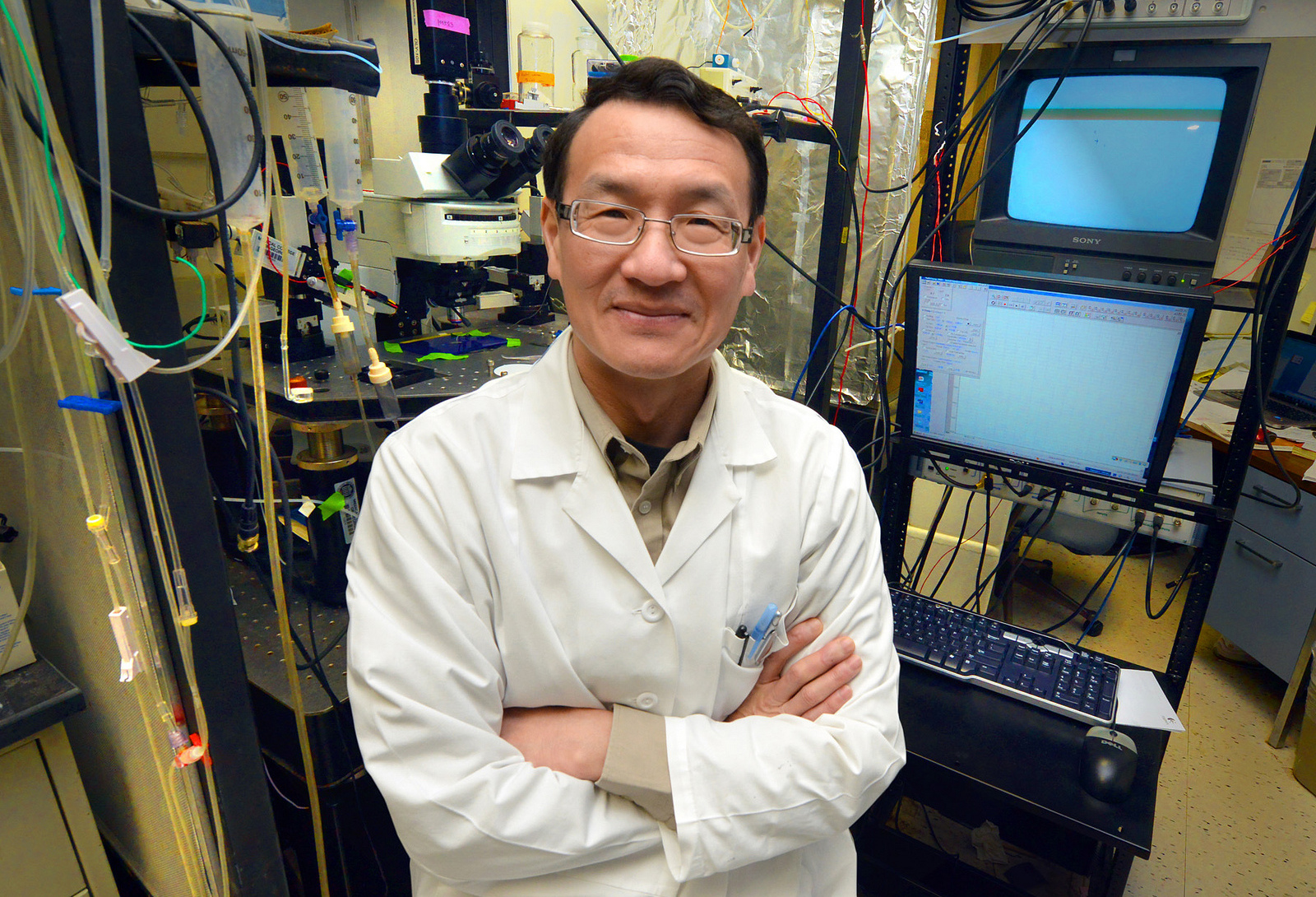 AUGUSTA, Ga. – A study of patients from across the nation with myasthenia gravis is helping determine the incidence of two new antibodies believed to cause the disease, and whether these patients need different treatment strategies.

Researchers are examining the blood of patients from 22 centers specializing in the treatment of mysathenia gravis, the most common communication problem between brain and muscle, to determine what percentage of patients have one or both of the new  antibodies and to characterize their clinical symptoms, said Dr. Lin Mei, chairman of the Department of Neuroscience and Regenerative Medicine at the Medical College of Georgia at Augusta University.

About 10 percent of patients have no evidence of two other antibodies already known to cause the disease, although they have classic clinical symptoms such as drooping eyelids, generalized muscle weakness and problems breathing, and electrical studies of their brain-muscle communication indicate a problem.

These so-called double-negative patients are the target for the new study, which is testing their blood for antibodies to two proteins, agrin and LRP4, that Mei’s lab has shown are also critical to healthy brain-muscle communication.

Antibodies to agrin and LRP4 have already been found in some patients, and LPR4 antibodies cause myasthenia gravis-like symptoms when injected into lab animals.

“We want to know whether these patients have any unique symptoms so we can diagnose them early then confirm their diagnosis with a blood test,” said Mei, Georgia Research Alliance Eminent Scholar in Neuroscience and principal investigator on the new $3 million National Instiutes of Health grant. He notes that several companies already are interested in developing agrin and LRP4 antibody tests.

“These patients may very well have slightly different symptoms because of where these antibodies are acting,” said Dr. Michael H. Rivner, MCG neurologist specializing in neuromuscular disease who directs the Electrodiagnostic Medicine Laboratory at Augusta University Medical Center and follows about 250 patients with myasthenia gravis. “Obviously if you get a blood test that shows something, you feel much better about the diagnosis,” added Rivner, co-investigator on the new grant.

Two antibodies already considered causative include one for the receptor for acetylcholine, a chemical released by neurons, which activates muscle cell receptors. The other is an antibody to MuSK, an enzyme that supports the clustering of these receptors on the surface of muscle cells.

Mei’s lab found a link between agrin and LRP4 in 2008, reported LRP4 antibodies as a new cause of myasthenia gravis in 2013 and that agrin antibodies were associated with the disease the next year. Those findings have already filled in some important knowledge blanks in how the brain and muscle connect during development and continue to interact lifelong.

During development, agrin is released by motor neurons to direct construction of the nerve-muscle contact, or synapse, and MuSK, an enzyme on the muscle cell surface, enables a clustering of receptors, which are activated by acetylcholine. While agrin and MuSK work together, they don’t directly communicate, which is where LRP4 comes in. Mei’s lab has shown that agrin communicates with LRP4 on the muscle cell surface, then recruits MuSK to join the conversation. LRP4 and MuSK become major components of the receptor needed for the muscle cell to receive the message agrin is sending throughout life.

Mei and his colleagues first identified the antibodies to agrin and LRP4 in the blood of patients who were double-negative. They went back to the laboratory and showed the antibodies to LRP4 cause myasthenia gravis symptoms in animal models. The new grant has them looking at animal models again to learn more about how LRP4 and agrin antibodies cause disease. This includes removing the two antibodies from patients then giving those to lab animals to see if both cause disease. They theorize the antibodies diminish signaling between agrin, LRP4 and MuSK and/or stimulate an immune attack against the neuromuscular junction.

Nearly 900 of the 4,500 patients with myasthenia gravis being followed at centers across the nation, such as Augusta University Medical Center, are double-negative. Over the next five years, more than 600 of those patients will have their blood tested for the two new antibodies. Similar studies will be done on the blood of healthy individuals as well as patients with other neurological problems such as Alzheimer’s and stroke, both to ensure that the antibodies’ presence is not random and to begin to collect evidence about whether they also contribute to other maladies, Mei said.

Thorough physical exams will look for any clinical distinctions in patients who test positive for the new antibodies. Research also will document their response to treatment.

Study participants will have other specialized testing, including single fiber electromyography, which looks at the electrical response of a single muscle fiber instead of the group of fibers controlled by a single motor neuron. Patients typically get this type of detailed analysis to help establish a diagnosis.

“Every time there is an action potential in this motor neuron, you should see a response occur within a certain amount of time. But if you have a defective neuromuscular junction, it may take longer for it to fire, or it won’t happen at all,” Rivner said, noting there tends to be plenty of neurotransmitter but too few receptors for a proper response.

When the MCG researchers immunize mice, rabbits and other animals to induce LRP4 antibodies, the animals show classic signs of myasthenia gravis and tend to be less active, although they can survive for long periods, Mei said. When they examine the neuromuscular junction, they can see its disentegration. An EMG shows the poor communication, which Mei likens to a personal relationship with no communication. “Things don’t go well,” he said.

Since word has spread of the previous studies identifying the new antibodies, the medical school has gotten numerous requests for testing of double-negative patients. Other centers have started doing limited testing, and early reports of the incidence of the newest antibodies vary dramatically in patients who are double-negative, another reason to consistenly look at incidence in a large number of patients, Mei said.

Whatever the cause, disease symptoms tend to respond well to therapy, which typically includes chronic use of drugs that suppress the immune response, Rivner said. However, immunosuppressive drugs carry significant risk, including infection, cancer and weight gain. “We would definitely like to have better treatments than we have now,” Rivner said.

Removal of the thymus, a sort of classroom where directors of the immune response, called T cells, learn early what to attack and what to ignore, is another common therapy for myasthenia gravis. While the gland usually atrophies in adults, patients with myasthenia gravis tend to have enlarged glands. Rivner is part of another NIH-funded study to determine whether gland removal really benefits patients. Other therapies include a plasma exchange for acutely ill patients.

Dr. Hongyan Xu in the MCG Department of Biostatistics and Epidemiology and Dr. Xiaoling Wang in MCG’s Georgia Prevention Institute also are co-investigators on the new grant.