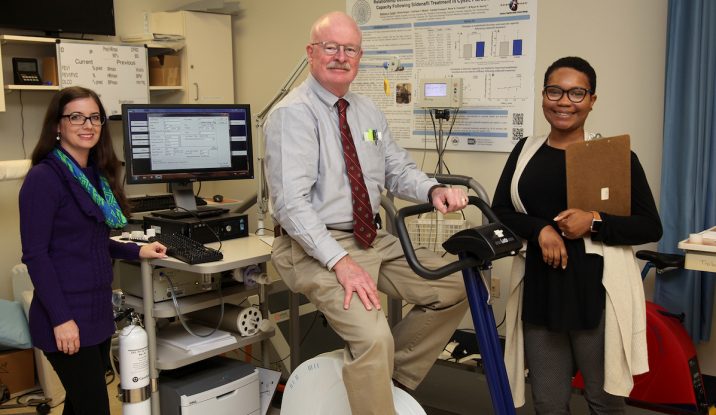 Aerobic exercise can improve the size and function of the brain, and now investigators want to know if it can also improve cognitive function in patients with schizophrenia who struggle with memory and attention problems.

In another related study funded by the National Institute of Mental Health, investigators want to know the potential of two drugs that may help patients avoid or reverse unhealthy weight gain associated with the antipsychotics they must take.

“We want to mitigate the modifiable risk factors that these patients have in abundance,” says Dr. Joseph McEvoy, psychiatrist and I. Clark Case Chair in Psychotic Disorders at the Medical College of Georgia at Augusta University.

MCG recently became a study site for the two trials funded by the NIMH and McEvoy is the site principal investigator.

Dr. David Kimhy, director of the Experimental Psychopathology Laboratory and program leader for New Interventions in Schizophrenia at Icahn School of Medicine at Mount Sinai, is the principal investigator on the Improving Cognition via Exercise in Schizophrenia, or ICE, trial.

ICE compares 12 weeks of aerobic exercise, including time on a treadmill, stationary bike and stair climber driven by active-play video games, three times weekly for an hour, with a stretch and toning program as the control group. About 200 patients at five geographically diverse research sites across the nation are being enrolled in the first study to focus on the impact of exercise on cognitive and intellectual function in these patients, McEvoy says.

Dr. Fred Jarskog, research director of the North Carolina Psychiatric Research Center at the University of North Carolina School of Medicine, is principal investigator on the Metformin and Lorcaserin for Weight Loss in People with Schizophrenia, or MELT trial.

MELT is enrolling 110 overweight patients nationally with schizophrenia or schizoaffective disorder, which can also have symptoms of depression or bipolar disorder. It’s exploring the effectiveness, safety and tolerability of the new weight-loss drug lorcaserin alone versus combining it with metformin, a longtime antidiabetic medication that reduces insulin resistance and is known to help people, including those with schizophrenia, lose weight.

Early death from common killers like cardiovascular disease, diabetes and stroke, resulting from a variety of factors like the significant weight gain that can result from their antipsychotic medication, lack of consistent primary medical care and high rates of smoking, are problems McEvoy and his colleagues hope both exercise and better weight control will help address for patients.

One characteristic of the disease is that patients have difficulty sticking with regular activities, like exercise, even if they enjoy it, McEvoy notes, adding that he encourages all of his patients to be physically active. He hopes with enough objective evidence, ongoing programs will develop across the country that will provide the structure that helps patients live better and longer.

ICE participants will have their aerobic fitness, cognitive function and daily functioning tested before starting the intervention, halfway through and at its conclusion. The investigators also will look at biomarkers of cognitive function, like brain derived neurotrophic factor, or BDNF, a protein associated with generating new neurons and keeping existing ones healthy. The investigators expect to see improvements in all these indicators of brain health at the end of the trial.

Lab animal studies indicate that regular aerobic exercise increases BDNF levels in the hippocampus, a small area of the brain associated with memory and spatial navigation, strengthens the growth and development of neurons and improves working memory and social interaction. Earlier clinical trials have indicated similar results in humans.

The often significant weight gain that can be a side effect of the powerful antipsychotics patients take, can cause additional problems with patients taking their medication as well as putting them at increased risk for metabolic problems like obesity, heart disease and diabetes when they do take it, McEvoy says.

Lorcaserin and metformin are two of the first weight-loss drugs that can be used in schizophrenia. Many drugs that help reduce weight can worsen psychotic symptoms by stimulating the sympathetic nervous system, which activates the fight-or-flight response. Instead, lorcaserin works to increase feelings of fullness by activating serotonin receptors in the brain, which influence appetite, and investigators are optimistic the new combination therapy will help. A third group of patients will receive placebo for comparison’s sake.

The MELT study looking at these drugs is enrolling patients at three sites for 52 weeks and will also provide interventions to increase physical activity and improve diet.

Investigators will not only keep tabs on weight, but changes in levels of good and bad cholesterol as well as total cholesterol, fat levels in the blood as well as hemoglobin A1c — which indicates your average blood sugar levels over the past three months — as well as fasting glucose.

Schizophrenia is a chronic, severe mental disorder that affects how a person thinks, feels and behaves, according to the NIMH. Overt symptoms, including hallucinations, delusions, reduced expression of emotion and speaking, along with cognitive symptoms like trouble focusing and an impaired ability to understand information and use it to make decisions, typically surface between the ages of 16 and 30, the NIMH says.

While the cause is unknown, there is widespread disturbance in the complex brain circuitry that underlies cognition, initiative and emotional interaction in these patients, McEvoy says, of the condition that affects about 1 in 100 individuals. While there may be subtle symptoms lifelong, as children grow into their teens and early 20s, corrupted circuitry involved with the release of chemical messengers like dopamine can create an imbalance — the latest theory is there is too much in some areas; too little in others — that results in problems like hallucinations and delusions. One way current antipsychotics help patients is by helping correct the imbalance, but in addition to weight gain, the drugs also can further sap energy and initiative, McEvoy says.