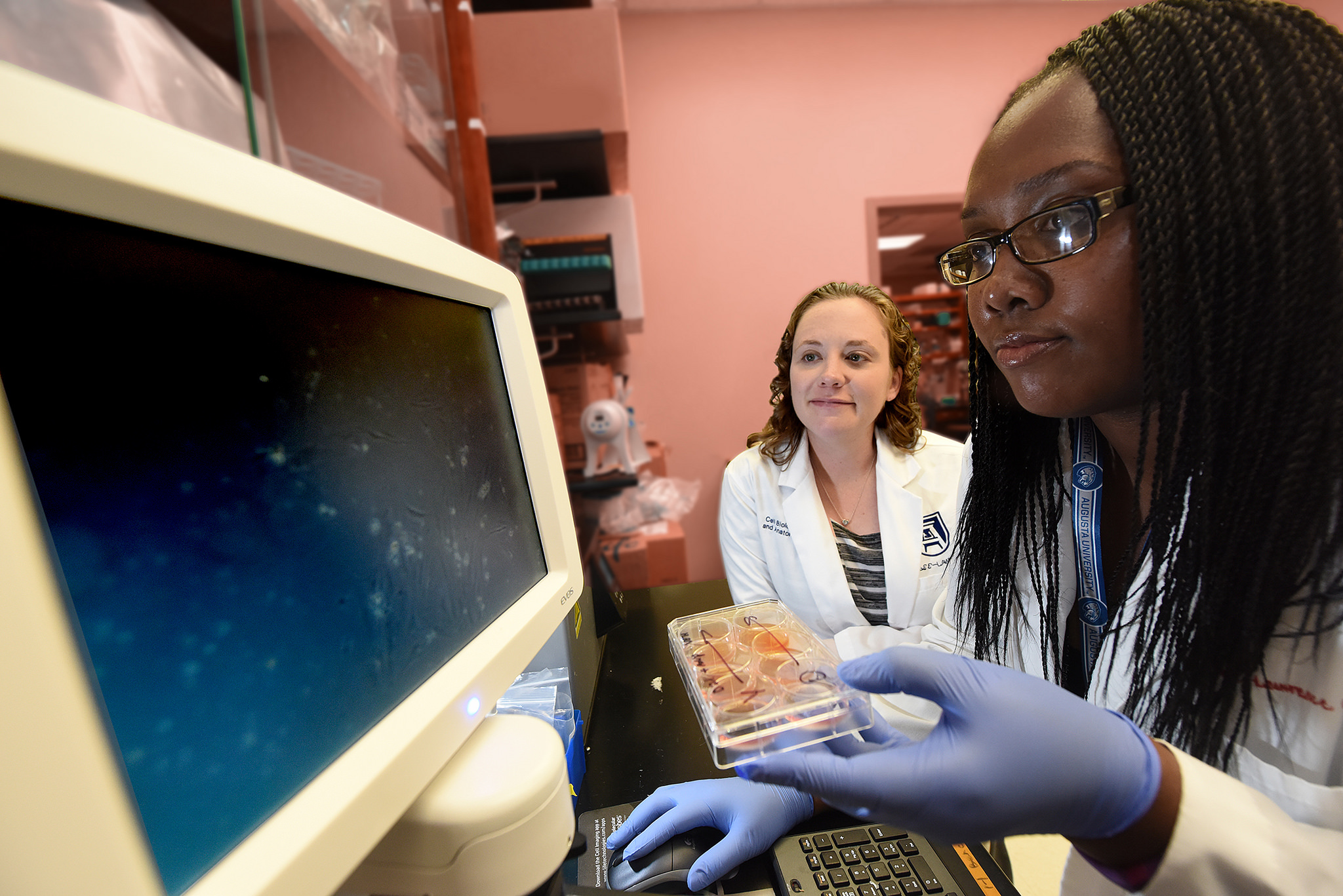 A group of steroid hormones could provide new insight into the bone loss and deterioration that occurs with aging, researchers at the Medical College of Georgia at Augusta University report.

Previous research has shown that the protein histone deacetylase 3, or HDAC3, turns off the genes that encourage the stem cells in our bone marrow to make and store fat instead of making bone. As HDAC3 levels decrease naturally with age, bones become less dense and easily breakable.

Now scientists looking further upstream to hopefully explain the mechanism behind that process are finding some conflicting results.

“We are looking at a group of steroid hormones called glucocorticoids, which our bodies naturally have in circulation as a response to different stresses to help quiet the immune response,” says Jessica Pierce, a biomedical sciences doctoral student majoring in cellular biology and anatomy. “But when these hormones enter bone cells, called osteoblasts (which make bone), they bind to a receptor that activates the expression of genes related to fat storage. We think that targeting that (glucocorticoid) receptor will inhibit that ability.”

Pierce is a winner of a 2017 Young Investigator Award from the American Society for Bone and Mineral Research and presented her research at the group’s annual meeting this past week in Denver, Colorado.

“To get that effect of bone loss and increased marrow fat when you lose HDAC3, you have to have glucocorticoids present,” says MCG biomedical engineer Dr. Meghan McGee-Lawrence. “We think that HDAC3 is the regulator of it, but they’re using glucocorticoid signaling to have that effect.”

Specifically, scientists believe that HDAC3 represses the transcription of the enzyme 11β-hydroxysteroid dehydrogenase type 1, which activates glucocorticoids that, in turn, drive fat production and storage.

“Releasing glucocorticoids in response to various stimuli is a natural thing that your body does,” McGee-Lawrence said. “We know that your circulating glucocorticoid levels increase with age. As with a lot of things in your body, too much and not enough of something can both be bad.”

While glucocorticoids occur naturally in the body, they are also used in various immune-suppressive therapies, many of which list osteoporosis as a side effect, she added.

To test their theory that glucocorticoids may also be a key driver in fat storage in our bones, Pierce and McGee-Lawrence, studied mice without receptors for the steroid hormones. To simulate the aging process, the mice were placed on a calorie-restricted diet, which also has been shown to result in lower bone density and increased marrow fat – just like what happens as we age.  Extreme caloric restriction, such as with anorexia nervosa, can also lead to weak and brittle bones.

“We thought these receptor-deficient animals would not have the same detrimental effects of bone loss and increase in marrow fat because that receptor isn’t present to initiate the lipid storage mechanism that we’ve studied,” McGee-Lawrence said. “If you take away the glucocorticoid signaling, could you prevent that from happening and prove that’s a part of the process?”

What they found is that the results were dependent on the setting.

When looking at the bone cells in a culture dish, the receptor deficient mice did show 80 percent less lipid storage than regular mouse models of aging. They also showed more bone matrix, which is the foundation for bone formation. But surprisingly, Pierce said, examination of two major bones in the leg, the tibia and femur, in a living animal showed the receptor deficient mice actually had more marrow fat and lower bone mass.

“We aren’t sure why that happened,” Pierce said. “When you take cells out of an organism, the conditions they’re growing in are different. We’ll never be able to 100 percent replicate what’s going on in the body. That could have something to do with it.”

“What it does suggests is that, inside the body, there’s some factor in the bone marrow that causing something different to happen,” McGee-Lawrence said. “What’s missing when we put the cells in culture and compared to what’s happening in the bone marrow environment in a living animal? We’re working on that right now.”

This work could one day give scientists another avenue for therapies the prevent bone loss.

“HDAC3 is a protein that’s expressed in the cell nucleus and it’s hard to do a lot about it,” she said. “It would be difficult to change levels and activity. But we know we can modify glucocorticoid levels in the body. We’ve been doing that for ages with medical treatments.”

Osteoporosis already is a major public health problem affecting about 44 million Americans and costing billions annually. The world’s older population is growing at an unprecedented rate with 8.5 percent of the worldwide population – 617 million people – age 65 and older, a proportion estimated to reach 17 percent by 2050, according to the National Institute on Aging.

MCG Postdoctoral Student, Dr. Raysa Rosario, from the Department of Neuroscience and Regenerative Medicine, also received a 2017 Young Investigator Award from the ASBMR. She presented her research on the role the receptor PPAR-gamma plays in inflammation and aging at last week’s meeting.