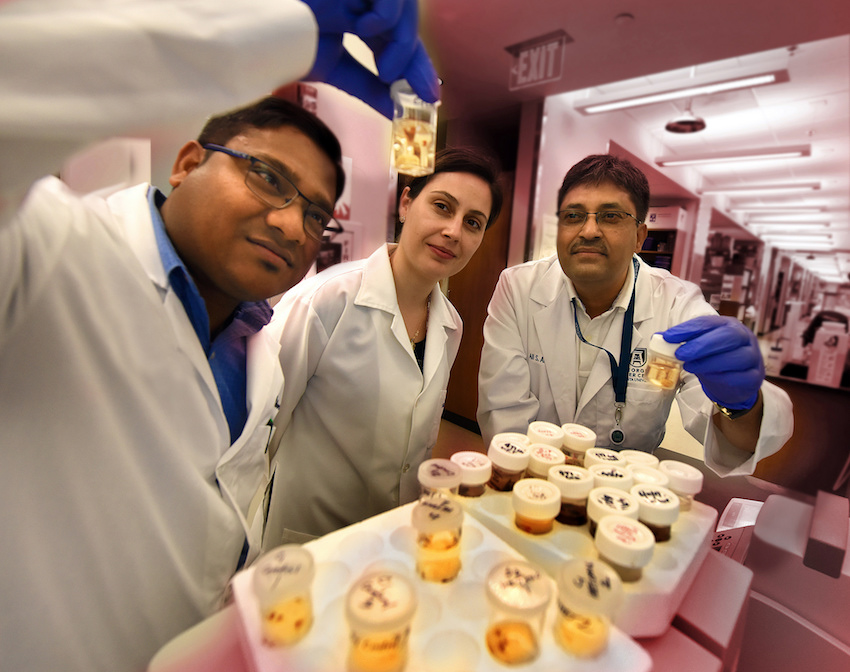 It’s a metabolite found in essentially all our cells that, like so many things, cancer overexpresses. Now scientists have shown that when they inhibit 20-HETE, it reduces both the size of a breast cancer tumor and its ability to spread to the lungs.

“The drug is reducing the ability of cancer cells to create a distant microenvironment where they can thrive,” said Dr. Ali S. Arbab, leader of the Tumor Angiogenesis Initiative at the Georgia Cancer Center and a professor in the Department of Biochemistry and Molecular Biology at the Medical College of Georgia at Augusta University.

Arbab notes that cancer cells are constantly doing test runs, sending cells out into the bloodstream to see if they will take hold. About 30 percent of patients with breast cancer experience spread, or metastasis, of the disease. The most common sites are the lymph nodes, liver, bones and brain, as well as the lungs.

For the preclinical studies by postdoctoral fellow, Dr. Thaiz F. Borin, published in the journal PLOS ONE, the scientists used the drug HET0016, a 20-HETE inhibitor developed to learn more about the metabolite’s many functions.

While not ready to say that the drug has potential use in humans, Arbab says the work points toward a new and logical target for reducing tumor spread. He notes that there are already drugs out there, including some over-the-counter anti-inflammatory drugs, which may also inhibit this overexpressed and now destructive pathway.

20-HETE – 20-Hydroxyeicosatetraenoic acid – is a metabolite of arachidonic acid, a fatty acid we make and constantly use for a wide variety of functions like helping make lipids for our cell membranes. 20-HETE also has a wide range of normal functions, including helping regulate blood pressure and blood flow. It’s also a known mediator of inflammation, which under healthy conditions can help us fight infection and protect us from cancer and other invaders.

“There is normal function and there is tumor-associated function,” says Dr. B.R. Achyut, cancer biologist, assistant professor in the MCG Department of Biochemistry and Molecular Biology and a study coauthor. “Tumors highjack our system and use that molecule against us.”

In fact, Arbab’s research team has shown that the high production of 20-HETE that occurs in cancer becomes an unwitting provider of almost everything cancer needs to prepare a place to comfortably spread.

Scientists call it the “seed and soil” hypothesis. To spread, cancer cells must detach from the primary site, in this case breast tissue, get aggressive enough to survive travel, gather supporting tissue and blood vessels where they land, take seed and eventually colonize the distant site, in this case, the lungs.

Arbab and his team have shown 20-HETE appears to help prepare this distant site by activating things like protein kinases that can change the function of proteins, their location and what cells they associate with, as well as growth factors that can make cells grow in size, proliferate and differentiate. It can even help make blood vessels, which a tumor will need once it reaches a certain size. 20-HETE also activates signaling kinases that enable cell division. It encourages inflammation-promoting factors like tumor necrosis factor alpha and several of the interleukins, another class of proteins that help regulate the immune response. In this scenario, they are turning up inflammation, which is a hallmark of cancer and other diseases.

“We are going after that tumor microenvironment,” says Arbab.

For their studies, they put human breast cancer cells and mouse mammary tumor cells in the mammary fat pad of mice, waited for the cancer to take hold and begin to spread, then intravenously gave mice HET0016 five days per week for three weeks.

They found HET0016 reduced the migration and invasion of tumor cells: 48 hours after the drug was given, cancer cells were less able to move about in small test tubes. The drug also reduced levels of metalloproteinases in the lungs, enzymes that can destroy existing protein structures, so that, in this case, cancer cells can penetrate the area and new blood vessels can grow. It also reduced levels of other key inhabitants of a tumor microenvironment like growth factors as well as myeloid-derived suppressor cells that can help shield cancer from the immune system. “It gets rid of one of the natural protections tumors use, and tumor growth in the lung goes down,” Arbab notes.

He, Achyut and their colleague Dr. Meenu Jain, assistant research scientist, reported earlier this year in the journal Scientific Reports that the drug also reduced tumor growth and prolonged survival in an animal model of the highly lethal, rapidly growing and vascular brain tumor, glioblastoma. That finding and related work got the scientists wondering if the research drug – or something similar – could one day help control the typically deadly spread of cancer.

Now they are looking at exosomes, traveling packages all cells send out as a way to communicate and swap substances. In the case of cancer cells, exosomes appear to be packed with items needed to build the supportive environment for their new distant location in the lungs or elsewhere. Once exosomes establish a niche, they send back a signal to the primary site for  cancer cells to join them. The scientists want to further pursue the ability of HET0016 to block these cancer-derived packages.

20-HETE’s co-opting by cancer has it emerging as a focal point for cancer treatment, says Arbab who has published more than half of the 20-HETE-related studies on the rapidly emerging topic.