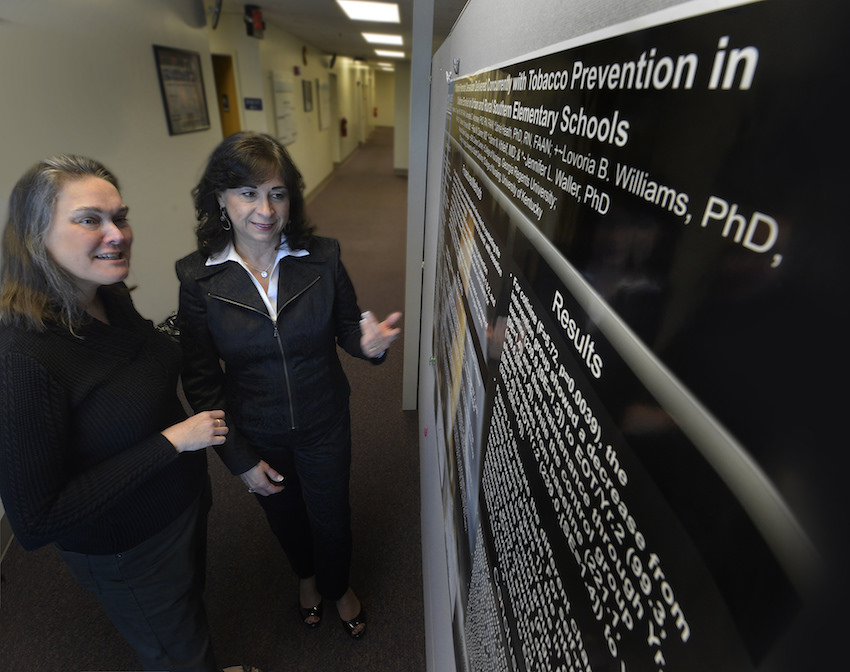 AUGUSTA, Ga. – Exposure to second-hand smoke is associated with a larger waist and poorer cognition in children, researchers say.

“The take-home message is that for these children, smoke exposure was connected to two major adverse health outcomes, one above the neck and one below the neck,” said Dr. Catherine Davis, clinical health psychologist at the Georgia Prevention Institute at the Medical College of Georgia at Augusta University.

Researchers looked at passive smoke exposure in 220 overweight or obese 7-11-year-old boys and girls.  They found smoke exposure associated with nearly all measures of adiposity in the children, including bigger bellies and overall fat. “And every single one of our cognitive measures was poorer in the smoke-exposed children,” said Davis, corresponding author of the study in the journal Childhood Obesity.

Percentages of body fat in smoke-exposed children were substantially higher than in their also heavy peers, further amplifying their risk of cardiovascular disease, diabetes and more, Davis said. While studies, including Davis’ at MCG, have shown a relationship between overweight and reduced cognitive function, this study found passive smoke had an impact on cognition that was independent of fat or socioeconomic status.

“All the bad things fat does to us, passive smoking makes worse,” said study co-author Dr. Martha S. Tingen, Charles W. Linder, M.D. Endowed Chair in Pediatrics at MCG and director of the Tobacco Control Program at the Cancer Center at Augusta University.

“And children who were exposed to second-hand smoke scored poorer on all cognitive tests,” shortfalls that can translate to a poorer attention span and lower grades in the classroom and on standardized tests, Tingen said. “We are talking about a recipe for an unhealthy child who becomes an unhealthy adult who cannot reach their full potential.”

Tailored interventions covering nutrition, physical activity and tobacco use in children and their families affected by these adverse health scenarios are needed to prevent adverse outcomes, the researchers said. “Doesn’t everyone want their children to be as smart and healthy as they can possibly be?” asked Davis.

Tingen notes that children typically don’t have options about smoke exposure and parents who smoke are demonstrating a poor health behavior choice that is putting themselves and their children at physical and mental disadvantage lifelong.

To help ensure accurate data, researchers collected both parental reports of their children’s smoke exposure as well as blood levels of cotinine, the major metabolite of nicotine, which is often used as a definitive test of smoking or passive smoke exposure. MCG researchers also assessed levels of physical activity, which can impact fatness, sleep and diabetes risk.

They found surprisingly that passive smoke exposure did not appear to worsen breathing problems, such as snoring and short periods of not breathing while the children slept. It also appeared unrelated – at least at this early age – to prediabetes, insulin resistance and fat around internal organs in the abdomen. Fat around the organs is considered a particularly high-risk factor for vascular disease and diabetes and ultimately heart disease and stroke. However, the larger waist size found in the children exposed to smoke also is considered a risk factor for these obesity-related health problems.

Their findings suggest, that at this age, passive smoke may have more effect on the amount of body fat rather than the metabolic dysfunction, such as diabetes, that fat may eventually cause, Davis said.

Davis noted that 28 percent of the children in the study were already prediabetic, but that the incidence was actually slightly higher in the children who were not exposed to second-hand smoke.

Previous studies, which often relied solely on parent reports of smoke exposure, have produced inconclusive findings about the relationship between passive smoke and obesity. Davis noted about a 25 percent discrepancy in their study between what parents reported and what their blood analysis showed. The largest discrepancy was in parents reporting there was not a smoker in the home while the children’s blood showed smoke exposure. But, there were also 18 children whose parents reported a smoker but the child’s blood held no evidence of exposure.

“If you are breathing in second-hand smoke, it’s almost as bad as if you were smoking the cigarette yourself,” Tingen said. Immediate effects include a lowering of the protective cholesterol, high-density lipoprotein, or HDL, and an increase in the disease-producing low-density lipoprotein, or LDL. Researchers are not certain, when or if, the negative effects will be reversed.

About 480,000 premature deaths occur in the United States annually related to tobacco use, with nearly 42,000 of those in nonsmokers due to passive smoke exposure, according to the U.S. Department of Health and Human Services.

The research was funded by the National Institutes of Health and the East Georgia Cancer Coalition.