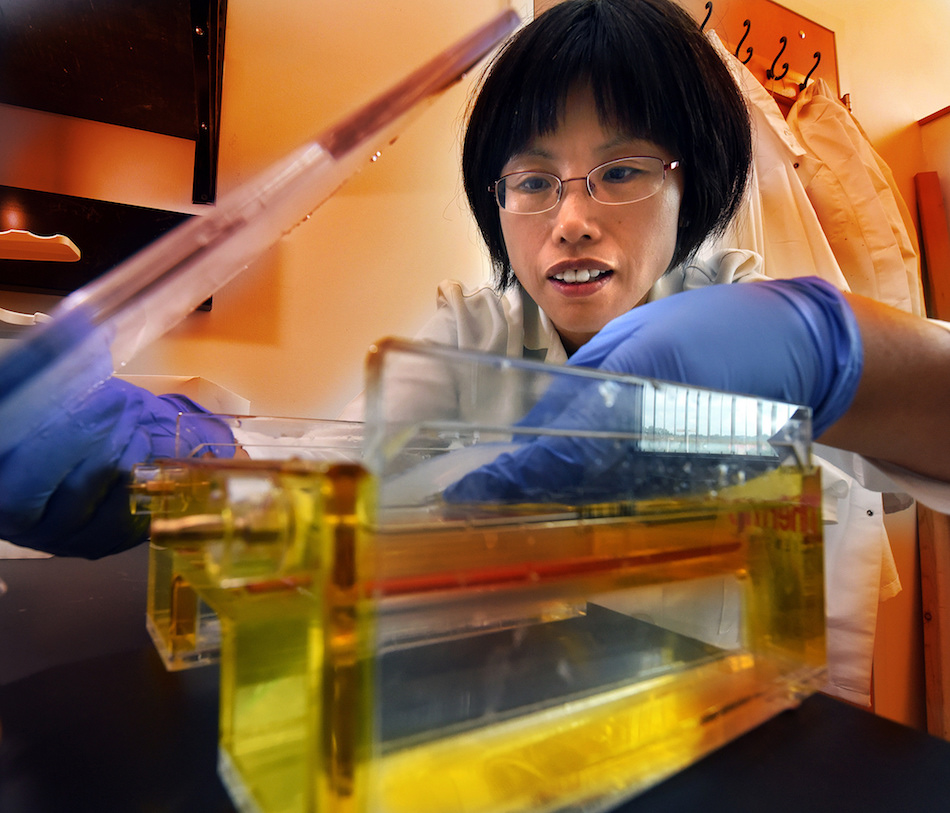 Scientists are trying to turn up the heat-burning ability of brown fat with the long-term goal of combatting obesity.

Babies and hibernating bears have brown fat to help stay warm and some adults also are lucky enough to have this fat that helps burn instead of store its unhealthy white counterpart.

Now, scientists at the Medical College of Georgia at Augusta University have early evidence that adjusting expression of a gene that plays a role in making brown, white as well as beige fat, also impacts brown fat’s heat- and calorie-burning potential.

“Instead of storing fat, brown fat helps you burn it, like a fireplace,” said Dr. Weiqin Chen, molecular biologist in the MCG Department of Physiology. Chen is principal investigator on a new two-year American Heart Association grant totaling nearly $160,000 that will help determine how the gene BSCL2, a natural fat regulator, helps stoke those healthy fires.

“What we are trying to do is promote what’s called human thermogenesis,” Chen said. “While brown fat doesn’t really increase your temperature, it helps turn the body into a place that burns rather than stores fat, much like exercise does. That is why it’s considered more metabolically active.” And while brown fat tends to cluster in the neck and chest regions, it can metabolize the whole body, Chen said.

While work is just beginning on the relationship of BSCL2 and brown fat development and activity, Chen has evidence that the gene’s expression is high during development of brown fat and remains relatively high in mature fat. Still, and seemingly ironically, when she deletes it in mature brown fat, mice, at least lose weight.

The magic appears to be in the timing. During development, high expression of BSCL2 appears important for brown fat cells to mature and form a significant, lasting brown tissue mass. When Chen and her team deleted the gene during development, smaller brown fat pads developed that were highly efficient but rapidly burned themselves up. As the mice got older, they also got fat.

But Chen has intriguing preliminary and seemingly counterintuitive data, that at this mature state, deleting the gene from the brown fat can actually make it even more efficient at burning rather than storing fat. And, while the brown fat pads may get slightly smaller, they appear to persist and mice, at least, lose weight.

Now they are putting the mice on a high-fat diet to see if it continues to protect against obesity as the scientists suspect or yields some additional surprising results. With the idea of future regulation in mind, she’s also doing high-throughput screening to look at what’s changed after the gene is deleted in brown fat, what gets activated when the gene is present and start putting the pieces together. She notes that researchers have not yet looked at whether humans, who are fortunate enough to have brown fat, have high or low expression of BSCL2.

“What regulates it is still a mystery,” she said, and in turn, what the gene regulates are questions she wants to answer. “What is the molecular target of this gene?”

The good news is that the gene appears to regulate brown fat without also activating the sympathetic nervous system. There appears to be an additional irony in that the established way to activate brown fat is to also activate the sympathetic nervous system, which is bad for you long term, Chen said. The system drives the so-called fight-or-flight mechanism that gets heart rate and blood pressure up, even dilates the eyes, arousing a hyper-state that is tough on the cardiovascular system.

While they also likely have their own unique signaling pathways, the sympathetic nervous system and BSCL2 have in common working through the signaling pathway cAMP/PKA. While the sympathetic nervous system works by activating cAMP/PKA, BSCL2 works by inhibiting the signaling. But once the brown fat is established, reducing the gene’s expression seems to enable cAMP/PKA signaling and increase brown fat efficiency without adversely impacting the heart. Chen notes that while cold exposure enables brown fat development, people who live in these harsh environs tend to have higher rates of stroke and heart attack.

Mutations of BSCL2 gene are associated with Berardinelli-Seip congenital lipodystrophy, a rare condition in which patients essentially have no body fat. Since they lack normal fat deposits all over the body, fat ends up circulating in the blood, depositing in and on major organs like the liver and heart. Despite their trim state, patients often are insulin-resistant, at increased risk for diabetes, have high levels of circulating fats, called triglycerides, heart problems such as heart failure, and more.

“That means it clearly plays a role in fat production and regulation,” Chen said of the gene.

She notes that the gene is highly expressed in all types of fat – white, beige and brown – but each of those fat types result from different precursor cells. Interestingly turning down the gene’s expression in established, unhealthy white fat can enable the body to make more beige fat, which, like brown fat, tends to have smaller, higher-energy cells. Exercise tends to support conversion of white fat to beige fat. There is some early evidence that brown fat can also pull unhealthy triglycerides out of the bloodstream.