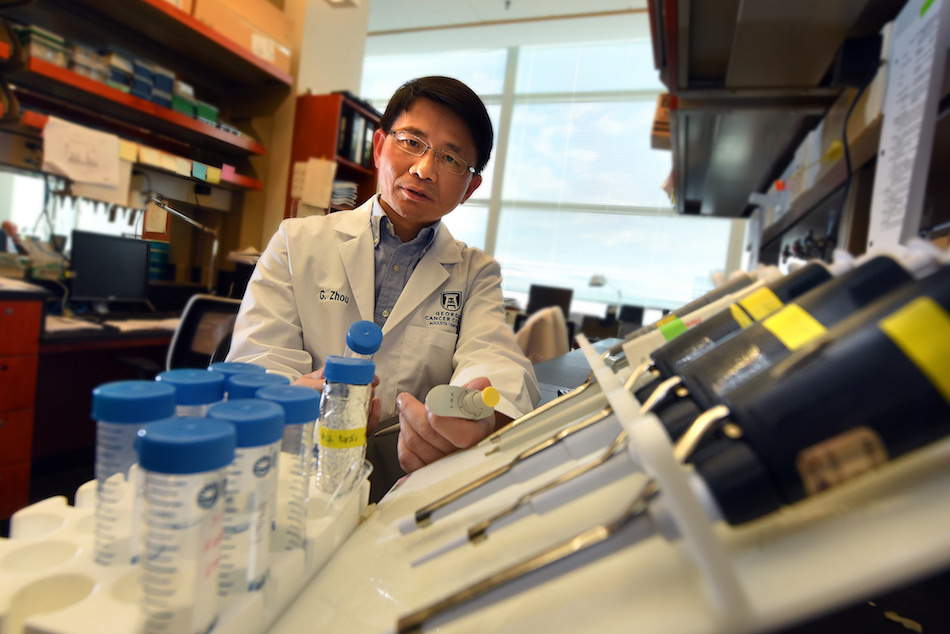 In the war on cancer, powerful chemotherapy agents are increasingly packaged with immunotherapy that primes a patient’s immune system to better battle the disease.

To strengthen their synergy, scientists are now focusing on immune cells that normally help the body keep peace but are problematic when it comes to these two working together to fight cancer.

“We call this an overlooked aspect of chemotherapy and radiation therapy as well because it’s an unwanted response but a natural one,” said Dr. Gang Zhou, immunologist at the Georgia Cancer Center and assistant professor in the Department of Biochemistry and Molecular Biology at the Medical College of Georgia at Augusta University.

Zhou, principal investigator on a new $1.7 million grant from the National Cancer Institute, is talking about how in response to some powerful chemotherapy agents, the body can begin to produce myeloid-derived suppressor cells, or MDSCs, that typically help calm the immune response.

In an otherwise healthy individual, myeloid cells fight infections; their suppressive ability apparently a balance to help ensure that the inflammation needed to fight the virus or bacterium doesn’t get out of hand and ultimately cause more health problems.

Some chemotherapy drugs, like the common agent cyclophosphamide, used for a wide range of lymphomas, leukemia, breast, ovarian and other cancers, are known for their ability to reduce the rapid cell division that is a cancer hallmark. Cyclophosphamide also is known to stimulate the immune system. But seemingly paradoxically, this and other common chemotherapy agents also increase the number of MDSCs. As the name implies, these bone-marrow derived immune cells can detract from the efficacy of immunotherapy and chemotherapy as well, by naturally suppressing the immune response.

“We want to help make these key pieces work better together,” said Zhou, whose new grant will help provide more insight into how these T-iMDSCs occur and what can be done to suppress them.

“We want to preserve the good things chemotherapy can do and add more targeted therapies to attenuate unwanted side effects,” he said.

As an example, adoptive T-cell therapy is an emerging immunotherapy strategy, which utilizes tumor-reactive T-cells, either isolated and expanded from a patient’s white blood cells or created from a patient’s own normal T-cells through biomedical engineering, to fight against cancer. T-iMDSCs can directly counter that effort.

Zhou and his colleagues have shown that mice with advanced lymphoma that received chemotherapy initially had a robust anti-tumor response when also given adoptive T-cell therapy. But they also began to produce more of the immunosuppressive myeloid cells that ultimately helped enable relapse of the disease. The scientists suspect the cell production was again a natural balancing act in a body where cancer, and now a drug, were both inducing inflammation. They found that depleting production of T-iMDSCs by giving yet another chemotherapy drug that also targets rapid cell reproduction – including these proliferating myeloid cells – prevented tumor recurrence, he and colleagues reported in the journal Cancer Research.

“Right now we tend to think chemotherapy primes the patient to make the way for immunotherapy to be more effective,” Zhou said. But his research team was among the early groups to find myeloid cells in the mix. The new NCI grant is enabling additional animal studies and human studies as well that will provide Zhou’s team more insight about how T-iMDSCs happen and how best to intervene.

Zhou is partnering with Dr. Locke Bryan, hematologist/oncologist and an expert in hematologic malignancies like Hodgkin’s lymphoma, to examine levels of MDSCs before and after chemotherapy. They hope to learn more about how levels change in humans and whether the cells become more suppressive following chemotherapy. Early evidence indicates they will find in some patients some of the same things they have found in animal models, Zhou said of the collaboration with Bryan, who directs the Infusion Clinic and is a member of the Bone Marrow Transplant and Hematology Malignancies Team at the Georgia Cancer Center and assistant professor in the MCG Department of Medicine.

“We want to better understand the pathways involved, the key molecules involved in MDSCs’ production and function. If we do that, then we can target those molecules,” Zhou said. Based on what they’ve already learned, they are screening compounds and have some good candidates that already are used in patients for other conditions.

The immune suppressing power of cyclophosphamide means it is also used to treat diseases where the immune system has been too aggressive, like rheumatoid arthritis and lupus, and even to prevent rejection of a transplanted organ. 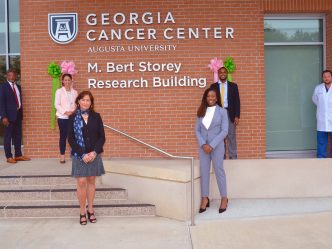