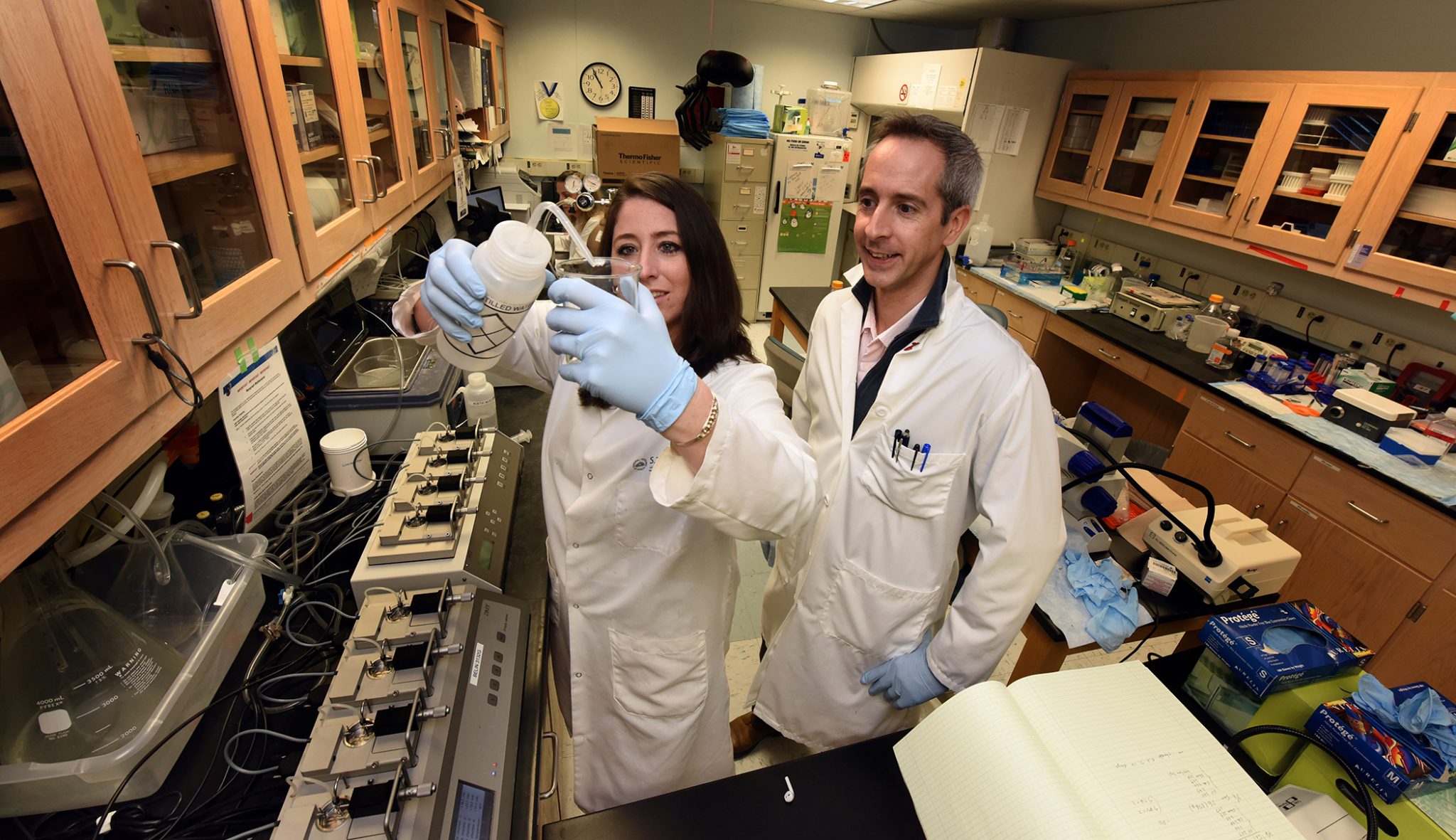 Obese, premenopausal women can lose the innate protection from cardiovascular disease that their youth and estrogen are believed to afford, and scientists want to know how.

Before menopause, the hormone estrogen helps blood vessels stay healthy and pliable, but obesity further increases levels of another hormone that results in blood vessels that are instead inflamed, stiff and scarred.

“There are several clinical studies that indicate that these women lose protection and we are trying to find out what is the change in obesity,” says Dr. Jessica Faulkner, postdoctoral fellow in the Vascular Biology Center at the Medical College of Georgia at Augusta University. “What is the underlying cause?”

Faulkner recently received a $172,926 National Heart, Lung and Blood Institute fellowship to further study the cardiovascular risk for these younger women, and whether inhibiting yet another hormone, progesterone, could restore their protection.

Youth keeps estrogen levels high, and being female also keeps levels of the hormone aldosterone naturally higher in females than males, which has a positive role in regulating blood pressure.

The problematic circle in females seems to start with obesity producing more of the hormone leptin which produces even more aldosterone, which at these levels harms blood vessels, says Dr. Eric Belin de Chantemele, physiologist in the Vascular Biology Center and Faulkner’s mentor.

In fact, obesity actually puts premenopausal women at higher cardiovascular risk than their male counterparts. Even when males are obese, their blood pressure increases are less than obese females, Belin de Chantemele says.

While there is conflicting data on whether levels of the sex hormone progesterone actually go up or down in obesity, the MCG scientists think progesterone plays a key role in this scenario by increasing the woman’s sensitivity to the clear increases in aldosterone.

“We think it’s a double whammy effect where you have increased aldosterone but you also have an increase in sensitivity that could be driven by progesterone,” Faulkner says.

In the blood vessels, the scientists have also found more receptors for aldosterone in premenopausal mice – fat and normal size – than their male counterparts.

“That is what this project is to help determine: Why the vasculature would be more sensitive to aldosterone and why they have more receptors,” says Belin de Chantemele. “We think it might progesterone,” adds Faulkner.

So they are looking at what happens to expression of the aldosterone receptor, called mineralocorticoid receptor, in female mice when they are certain progesterone levels are higher. These include the luteal phase of the menstrual cycle, which is 14 days after ovulation begins and when progesterone levels increase to prepare for a possible pregnancy, as well as during pregnancy.

“We are trying to figure out what is going on between the two receptors,” Faulkner says, which includes seeing if expression of one affects expression of the other. There definitely appears to be some kind of back and forth.

Female mice have three to four times higher expression of the aldosterone receptors in their blood vessels than males, and obese female mice have even higher levels, even when compared to obese males. Removing the sex hormones by removing the ovaries negates the sex difference in receptor numbers but adding just progesterone back to the equation restores it.

When they remove aldosterone receptors from the vessels of these female mice, it eliminates the vascular dysfunction and likely the cardiovascular risk.

This data, and the new information they are collecting now, have them thinking that however all the pieces finally fit together, these receptors are mediating the cardiovascular problems in female obesity, and progesterone is mediating their increased activation.

They are betting that with either receptor MIA, the mice will not develop the hallmark vascular dysfunction that can lead to cardiovascular disease, Faulkner says.

“Normally you would know the protein in the middle,” Faulkner says. “That is one of the things we still don’t know. We don’t yet know if there is a direct effect or if there is something in the middle.” But they are certain the net effect is bad.

They are among the first to look specifically at the aldosterone receptor in the blood vessel and believe they will continue to find it’s higher there in females than males.

Belin de Chantemele’s lab has already shown in female mice that increased aldosterone activity driven by leptin was driving their hypertension. Male mice, on the other hand, are more prone to activate the sympathetic nervous system, the so-called fight or flight mechanism, which leptin can also activate.

If their theories continue to hold, there are drugs already on the market that target key points in the unhealthy interactions. One drug that blocks progesterone expression is mifepristone, or RU-486. The older hypertensive agent spironolactone is known to block aldosterone receptors but is rarely used as a frontline antihypertensive. Belin de Chantemele has already proposed that physicians consider the drug early in their therapy choices for hypertensive women.