Scientists work to improve recovery of your sense of taste 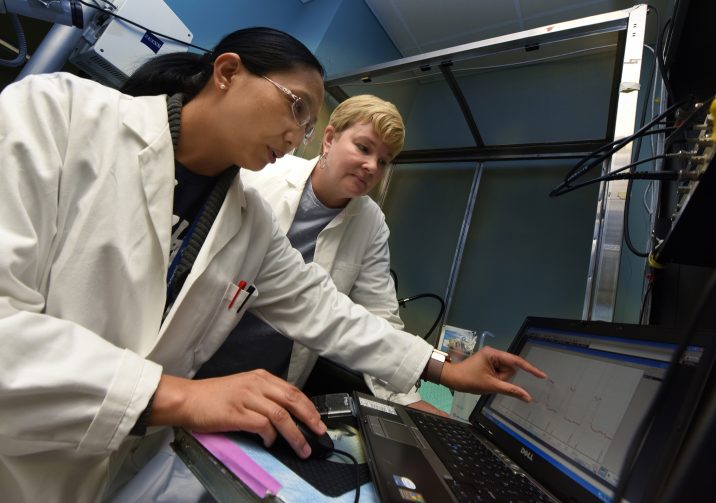 When it’s a significant injury, not just a hot pizza, that damages your tongue and taste buds, you appear to need a cell type best known for its inflammation-promoting skills to help restore your sense of taste.

The intricate system that enables us to savor that pizza is daily mildly traumatized by the foods we eat or even overzealous chewing, and is essentially in a constant but low-level state of renewal that keeps our sense of taste refined.

But more significant assaults, from dental and ear procedures, head trauma, even middle ear infections, can more seriously injure our sense of taste, affecting our nutrition and overall quality of life, says Dr. Lynnette P. McCluskey, neurobiologist in the Department of Neuroscience and Regenerative Medicine at the Medical College of Georgia at Augusta University.

McCluskey has evidence that’s when interleukin-1, or IL-1, a  family of cytokines or proteins secreted by immune cells that promote inflammation but also help regulate neuron proliferation and differentiation, become essential.

“It’s when you get this massive injury and you basically need to recapitulate the system, recapitulate development, that you need IL-1 signaling,” says McCluskey.

She’s principal investigator on a $1.6 million grant from the National Institute on Deafness & Other Communicative Disorders that is helping her lab better define how we rebuild our sense of taste and possibly discover a novel way to also aid recovery of other sensory functions that enable us to also smell, touch, hear and see the world.

“Can we put something on those sites that would eventually make them recover even faster and better?” she says of critical junctures throughout our body where peripheral nerves connect with cells like those that comprise our functioning taste buds.

Her ultimate goal is to be able to manipulate IL-1 signaling in specific cell populations at specific times to speed regeneration and recovery.

At least in mice, the well-orchestrated taste system will typically regenerate within two weeks; the nerve regrows to the right spot on the tongue and signals progenitor cells in the epithelium, or top layer, of the tongue to become the diverse group of cells needed to form new taste buds, then the rejuvenated nerve and new taste buds connect.

“Everything becomes functional again,” she says, acknowledging that the mouth is essentially a mess — between pathogens and mechanical damage — and that without such a great ability to regenerate, none of us would have our sense of taste long.

Unfortunately, following a significant injury in humans, even with microscopic surgery to help repair nerves, about half of patients don’t get functional recovery.

When the nerve is injured, the complex of cells that comprise the taste buds degenerates, taste buds disappear, and their injured nerve dies back to the injury site. The MCG team has seen that IL-1, which is actually activated in the both neurons and taste bud cells by the injury, quickly recruits immune cells to the scene.  Neutrophils arrive to basically complete demolition of the damaged area and macrophages follow to consume and remove the debris and secrete factors that likely encourage functional repair, which includes the essential step of reconnecting with their associated nerves.

“One of the first things we are going to do is figure out when IL-1 signaling is needed and in what cells,” McCluskey says. They have genetically blocked it and are now also blocking it with drugs, and suspect they will find that for proper regeneration, IL-1 will be needed within hours of an injury in all the affected cells.

Without its early presence, they have already watched the nerve grow back to the surface of the tongue — but apparently not to precisely the right place — so taste buds don’t form in a timely manner and connect with the rejuvenated nerve even two weeks after they normally would. The taste buds that do form have fewer cells and are poorly organized.  One of the many things they are exploring now is whether functional taste ever recovers without IL-1.

“We think that part of the deficit is that these cells are not getting the signals they need,” she says, and they have evidence the key signals are coming from IL-1. One of the important functions in response to signaling, likely from IL-1, appears to be keeping the progenitor cells in the tongue at the injury site where they can start growing and differentiating into the correct cell complement.

“If you do not get the right cell types, you are not going to get taste,” she says. They know IL-1 affects the function of taste bud cells because when they squirt some on the functioning cells in a dish, it increases their activity.

They are inhibiting signaling of the IL-1 receptor during development, in adulthood and in select cell populations like leukocytes and taste bud cells in mice, to see if that delays or even prevents a functional recovery as they suspect it will.

An early sign of reduced vigor may be reduction in the usually rapid response of neutrophils and macrophages to the injury site. They also are ablating IL-1 signaling in the epithelium where future taste bud cells reside to see what that does to the recovery of taste function.

To aid their detailed scrutiny, they are making mice whose IL-1 receptors light up in epithelial cells as an indicator they are getting the message to make taste buds.

“There is very little known about how sensory cells regenerate and hook up to the nerve and this is really a critical gap in regaining function,” McCluskey says.

“Surgeons are very, very good at repairing these nerves after injury but it’s really at the limits of what they can do,” McCluskey says. A surgeon may be able to reconnect an injured nerve or even do a nerve graft if the remaining healthy portions of the nerve can’t quite reach each other after injured portions are removed. But for it to be a functional nerve, the reconnected nerve must regenerate to the point that information can again run through it and it can, in turn, communicate with, in this case, taste bud cells, she says, which also must regenerate.

Without receptors for the cytokine, they have documented that the nerve’s response to chemicals that stimulate taste are still not functional even 36 days after cutting the nerve when normally it takes about half that time to regain function.

They’ve also found that sectioning the nerve actually increases IL-1 expression in taste buds, which recruits macrophages and neutrophils that can secrete more IL-1 in the area, another indicator of the importance of the cytokine in recovery from a significant injury.  Fragile nerves can be injured by not just trauma, like a car accident or knife wound, but even pressure or stretching.

The chorda tympani nerve innervates taste buds in the front two thirds of the tongue. It’s a branch of the facial nerve that extends through the middle ear and carries taste messages to the brain.

The taste sense includes sweet, bitter, salty, sour and umami – a strong meaty taste found in foods like mushrooms and mature cheeses, and associated with amino acids like glutamate.

McCluskey notes that renewal of our taste system generally works so well likely because it has to. “Think about it phylogenetically. Without taste if you are in the wild and don’t have a grocery store, you are going to die. You can’t tell bitter poison plants from sweet, good stuff that is going to give you calories,” she says.

Despite the emerging importance of IL-1, she suspects there are many other factors involved in the usual and constant turnover of a properly functioning sense of taste. Dr. Robin Krimm at the University of Louisville School of Medicine, has shown, for example, that brain derived neurotrophic factor is important to this important connection during development and is continuing to look at its role in this dynamic in adulthood.

Young people generally tend to be as good as mice at recovery of their sense of taste, but McCluskey’s research has shown that age significantly delays the time it takes to recover your taste sense after a significant injury. In rats at least, it takes twice as long. She has found teamwork of the two immune cells – neutrophils and macrophages – is impaired with age, with too many neutrophils and too few macrophages. The sense of taste generally is considered to decline with age although cell numbers remain steady, she notes.