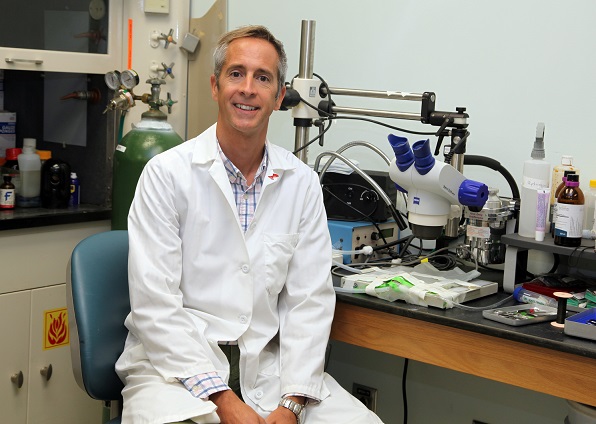 The newer generation of HIV drugs has turned the once-lethal infection into a chronic condition, and cardiovascular disease has emerged as the leading cause of death in these individuals.

Now, Medical College of Georgia scientists are dissecting the also emerging obesity paradox that the newer drugs appear to cause weight gain, which appears to limit, rather than increase patients’ already significant risk of developing cardiovascular disease.

Additional twists are that the virus itself and the fact that people are living longer with it, increase their risk of cardiovascular disease, and their weight gain should have a multiplier effect, rather than limit their risk of the nation’s number one killer.

Add to the mix, HIV-positive individuals appear to have an accelerated disease course with heart attack and heart failure rates even higher than those without the viral infection.

At least one more twist is that the first generation of HIV drugs and the uncontrolled virus itself caused often-dramatic weight loss in these patients, which also increased their cardiovascular risk.

“We are really trying to understand this obesity paradox and the mechanisms of atherosclerosis in HIV,” says Dr. Eric Belin de Chantemele, physiologist in the Vascular Biology Center and Department of Medicine at the Medical College of Georgia at Augusta University.

So they are working to find out more about just how the virus contributes to cardiovascular risk; how the commonly used and efficacious antiviral dolutegravir affects weight and other influencers of cardiovascular health; and the ironic ‘how’ these newer antivirals may limit cardiovascular risk when weight gain itself is a risk factor.

They have evidence that at least one answer to the cardiovascular protection these drugs may afford is the satiety hormone leptin, says Belin de Chantemele, principal investigator a $2 million grant (R01 HL147639) from the National Institutes of Health.

“We are thinking leptin could be the protective factor produced by adipose tissue, and this increase in fat mass with the newer antiretroviral agents could potentially protect the blood vessels and limit the development of atherosclerosis,” he says. At least the right amount of leptin.

Too little leptin is vascular damaging, as seen in early patients with HIV at the other end of the spectrum with extreme fat shortage, called lipodystrophy. Meanwhile, high leptin levels resulting from obesity are one of the reasons excess weight is a cardiovascular risk factor.

Low leptin signaling leads to increased expression of the Nox1 gene in the lining of blood vessels, which also leads to increased inflammation, superoxide production and generally setting the stage for disease. Without leptin, the blood vessels of patients and mice just can’t relax properly. Leptin therapy in humans with lipodystrophy seems to correct their metabolic problems — and cardiovascular risk — and Belin de Chantemele’s team has seen a complete restoration of vascular function in their animal model as well.

But at high levels, Belin de Chantemele has shown leptin is also bad for the cardiovascular system, increasing factors like levels of the steroid hormone aldosterone, which at high levels contributes to negatives like inflammation and stiff blood vessels.

They hypothesize that the virus increases the secretion of TNFα and high levels of this growth factor increase inflammation as well as energy expenditure, or calories burned, which is one way the virus causes weight loss.

They also theorize that newer combination antiretroviral therapy, or cART, decreases inflammation, which is good, but also decreases energy expenditure, which may help explain the weight gain. So, one of the things they want to know more about now is the contributions of low TNFα in weight gain.

Early in the use of cART, weight gain was attributed to patients having a better appetite because they felt better, which may also be a factor, Belin de Chantemele and his colleagues say.

But they suspect there is more to it as weight changes they are seeing are pretty consistent and rapid in patients taking these drugs that have been around for less than a decade.

“The only thing that changed in these patients’ lives was the drugs. The virus was already under control,” HIV pharmacist Dr. Amber Ladak says.

While patients have experienced both generalized and centralized weight gain, a common factor is that: “Nobody likes it,’ says Jonelle Poe, physician assistant with the Ryan White Program in the MCG Department of Medicine and adjunct clinical faculty member in the Physician Assistant Program in the Augusta University College of Allied Health Sciences.

In fact, it was patients’ frustration with gaining weight in the face of battling the infection — and trying to take good care of themselves — that led to a small parallel clinical study on which Poe is the principal investigator. That study, funded by an intramural grant, is following the impact of dolutegravir on weight and other cardiovascular health indicators in patients’ first six months on the drug. Dr. Ryan Harris, clinical exercise and vascular physiologist at the MCG Georgia Prevention Institute and Department of Medicine, is analyzing the cardiovascular health of study participants.

The investigators chose dolutegravir because it has been associated with the most weight gain among the newer drugs by Poe, Ladak and others. They are monitoring changes in weight, where patients gain weight, and any impact on things like lipid and cholesterol levels, blood flow and resting metabolic rate as patients start using the drug.

Still little is known about exactly how the virus or the newest therapies might contribute to either obesity or blood vessel disease, so back in the lab, Belin de Chantemele and his team are focusing on how the drugs affect these functions in their HIV animal model.

There is preliminary data, from experience with patients whose drugs were changed as a regular part of their care, that which of the cART drugs you take can make a difference. In fact, Poe has already changed medication for some patients to help suspend weight gain, and the lab has looked directly at the impact of several of the newer drugs on weight gain by giving them one at a time to healthy mice. Now they are trying the drugs in mice with HIV.

In terms of cardiovascular impact, the lab has shown that the virus as well as lipoatrophy, the extreme fat loss the viral infection and some of its early treatments cause, reduce leptin levels and leptin signaling in blood vessels, which promotes endothelial dysfunction. That means the lining of blood vessels is unable to perform many of its important tasks like maintaining proper tone, a balance between constriction and dilation of blood vessels, which is critical to blood flow, blood pressure and how hard the heart works, as well as important rolls in clotting, fluid and electrolyte balance and regulating inflammation.

They’ve found elevated levels of the reactive gene Nox1 in the blood vessels of their disease models, and when they used agents to either scavenge for or inhibit Nox 1, it restored normal endothelial function in both their models of HIV infection and lipoatrophy. They’ve also found decreased leptin signaling and increased inflammation in the aorta, the body’s largest artery, in people with HIV.

Leptin therapy, on the other hand, helped the blood vessels in models of both HIV and lipoatrophy relax, and markedly reduced Nox1 expression and inflammation. But when they selectively deleted leptin receptors from the endothelial cells that line blood vessels, it again hampered the blood vessel’s ability to relax apparently via Nox1.

The once-daily dolutegravir received FDA approval in 2013 and is included in two of the first-line treatment regimens for adults in the medical practice guidelines of the U.S. Department of Health and Human Services. This newer class of HIV drugs are categorized as HIV integrase inhibitors, which help keep HIV from incorporating into a patient’s genome, and providers often use several different classes of drugs that work different ways to block the virus’ replication cycle, Ladak says.

Poe notes that while about 75% of the patients seen by the Ryan White Program at MCG are males, it’s black females who tend to be most impacted by the weight gain.

Poe noted one patient diagnosed in the 1980s who experienced both extreme weight loss because of the infection and the early treatments, and more recently a 60-pound weight gain in a handful of months on the newest drugs. An eight-pound gain is more average for her patients, she says, and others across the nation have reported similar gains even in the face of trying to eat healthy and stay active.