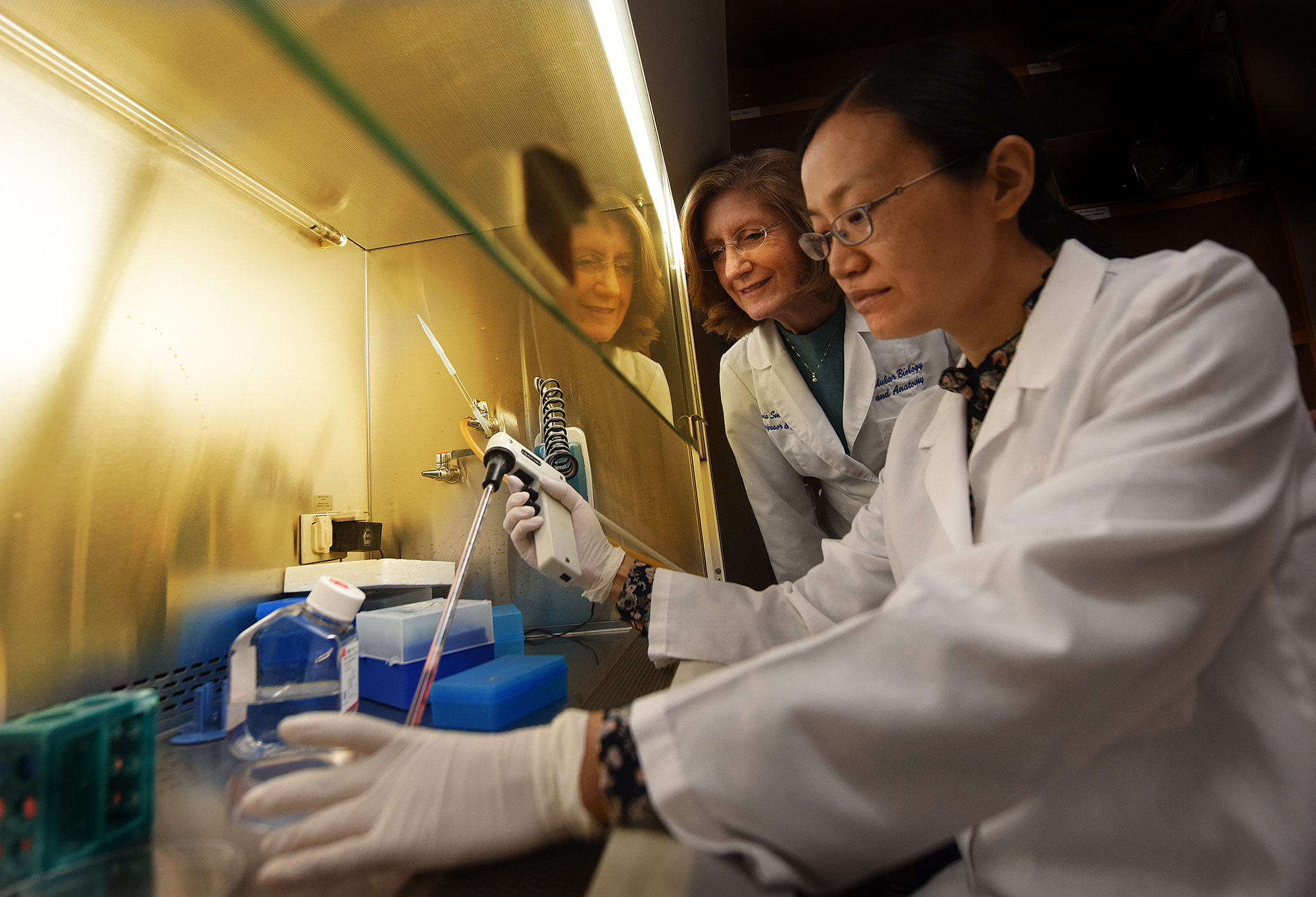 Scientists have shown that a medicine prescribed for severe pain can help preserve vision in a model of severe, blinding retinal degeneration. Now they want to know more about how it works.

They have evidence the drug may activate one of the most powerful antioxidants in our cells by first activating a receptor that is already a target in neurodegenerative disease.

The drug is pentazocine, the receptor is sigma 1 and the powerful natural antioxidant is Nrf2.

“We are very, very pleased that we can now explore the mechanisms,” says Dr. Sylvia Smith, chair of the Department of Cellular Biology and Anatomy at the Medical College of Georgia at Augusta University and co-director of the James and Jean Culver Vision Discovery Institute at AU.

Smith is principal investigator on a new $1.14 million grant from the National Eye Institute that is helping further explore the connections and identify new treatment targets for sight-robbing conditions like retinitis pigmentosa, macular degeneration and glaucoma.

Sigma 1 receptor is a well-established non-opioid pain receptor, but Dr. Smith has shown it’s also essential to a healthy retina. Without sigma 1 receptor, the Müller cells that support our photoreceptor cells struggle to manage oxidative stress in this dynamic tissue that requires a lot of oxygen and light to enable vision.

They’ve shown that pentazocine activates the sigma 1 receptor and reported in 2016 in the journal Proceedings of the National Academy of Sciences that the drug surprisingly helped preserve vision in their model of severe retinal degeneration.

Now they want to know if the magic is in the sigma 1 receptor modulating the Nrf2-Keap1 pathway.

In health, the proteins Nrf2 and Keap1, along with another called cul3, congregate quietly in the cell cytoplasm. When more Nrf2 is made than we need, it naturally moves to the cell proteasome to be eliminated.

But in a state of oxidative stress – where the byproducts of oxygen use pile up and become problematic as they can in conditions like retinitis pigmentosa and aging – Nrf2 and Keap1 disassociate. The freed Nrf2 instead migrates to the cell nucleus where it can activate hundreds of natural antioxidants and cell protection genes.

“It can launch an almost amazing response to stress,” says Smith.  “I think it’s arguably the most important antioxidant in cells.”

In this sight-saving chess game, another protein called Bach1 must first get out of the way. Bach1 is sitting on the regulatory regions, called antioxidant response elements, inhibiting these helpful genes, says Dr. Bobby Thomas, neuroscientist in the MCG Department of Pharmacology and Toxicology, who is a coinvestigator with Smith on these studies and also exploring the pathway in Parkinson’s disease.

But In the high oxidative stress environment of retinitis pigmentosa – and Parkinson’s – the beneficial upregulation of Nrf2 appears overwhelmed.

Millions of super metabolically active photoreceptor cells in the retina – some 125 million rods and 6 million cones – use a lot of oxygen constantly converting light into images, Smith says. In the case of retinitis pigmentosa, it’s actually a genetic mutation that kills off the rods but their death creates so much oxidative stress that the cones also are lost in what Smith calls a “bystander” effect.

It’s the cones pentazocine appears to protect, which should enable individuals to maintain functional vision. Interestingly and inexplicably, the high oxidative stress increases the binding of pentazocine to the sigma 1 receptor.

To yield vision protection from a pain medicine, the MCG team has evidence pentazocine interacts with the Nrf2-Keap 1 pathway but they don’t know how it alters proteins and their function in that pathway.

At least in their animal model, they know that low doses of the drug every other day modulate levels of Nrf2 in the retina and they suspect – but still don’t know – that change is central to how it protects vision. So they are looking more closely at how essential Nrf2 is to the rescue of photoreceptor cells.

They also are closely documenting how pentazocine treatment alters expression of Nrf2-Keap 1, looking again at whether it inhibits Keap1, setting Nrf2 free to travel to the cell nucleus so it can activate protective genes. And, they’re looking at the usual degradation of the powerful antioxidant, Nrf2, which occurs when oxidative stress levels are lower and we don’t so need much.

They also are exploring the impact of pentazocine treatment over time to see if the early protection of cone cells continues to hold. “Will it last?” Smith says pragmatically. Finally, they are looking at a few other compounds that bind to the sigma 1 receptor to see if they yield similar, beneficial vision effects.

There are many caveats in the complex scenario that Smith and her team also are pursuing with the new grant. For example, treatment with pentazocine doesn’t increase Nrf2 levels, rather it normalizes them. Smith suspects, that as with inflammation, which is necessary to healing but contributes to conditions like hypertension and cancer when it’s protracted,  the constant activation of Nrf2 that occurs in the face of high oxidative stress in the retina may simply overwhelm the natural protective system. The drug may help restore a more effective level of activity.