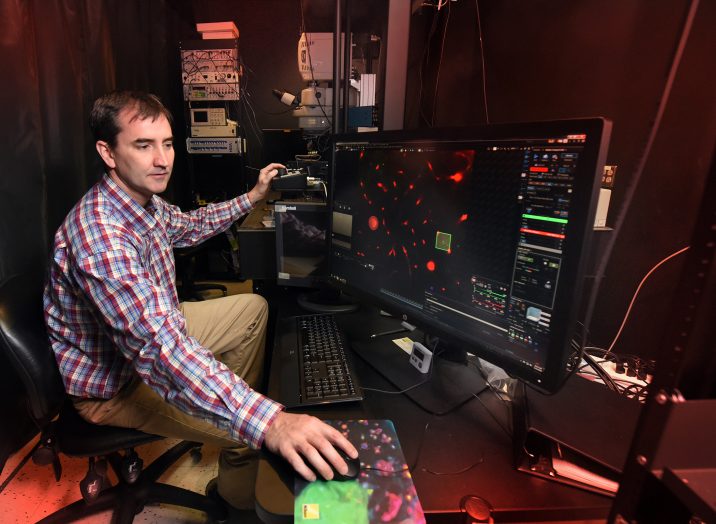 When a group of our neurons get activated by thinking hard about a math problem or the vibrant colors of an exotic flower, within a single second, blood flow to those brain cells increases a bit.

This bump in blood flow is a way the brain ensures that highly active neurons get enough blood, and the oxygen and nutrients it carries, says Dr. Philip O’Herron, neurovascular physiologist in the Department of Physiology at the Medical College of Georgia at Augusta University.

“The brain consumes a lot of energy, but when neurons are activated they consume more energy than when they are silent,” O’Herron says. “The increase in blood flow needed to provide that energy is pretty small — often only a few percent increase — compared to the amount of blood already there.”

But even the small increase can look a bit like overkill to scientists like O’Herron exploring the brain’s physiology. He’s among the scientists who’ve seen how not only are the activated neurons getting more blood and oxygen, but so is nearby tissue that has no clear involvement. It appears that even the firing brain cells are getting more than needed since oxygen levels in the blood remain higher than the norm past the point of action.

O’Herron has received a two-year, $420,000 Exploratory/Developmental Research Grant from the National Institutes of Health that is enabling him to learn more about this natural, common response, including how neural activity drives blood flow increases, how important the increases are for the health and proper functioning of neurons and whether there really is  overkill.

Benefits of better understanding could include better interpreting results of decades-old imaging technology called functional MRI, or fMRI, which is based on the premise that increased neural activity affects blood and oxygen flow to that region and is currently used to explore problems like brain tumors and epilepsy. It could also begin to clear up whether functional hyperemia is one of the abilities that goes awry in brain diseases where blood flow is compromised like stroke and Alzheimer’s.

“Nobody really knows the exact link between neural activity and the blood flow change,” O’Herron says. “Although the vascular system’s reaction to neural activity might seem like overkill, biological systems are rarely wasteful so we may be lacking some critical insight into functional hyperemia. There probably is a good reason for it and that is one of the things we would like to figure out.”

He hypothesizes that the seeming overkill is a result of how blood vessels communicate with each other to get more blood to active regions. Big blood vessels on the surface of our brain feed progressively smaller ones that dive into and directly feed brain tissue. When one of the small, diving vessels senses increased neural activity, it asks the bigger blood vessel for help, a message that must resonate over a long distance, and the blood vessels feeding nearby tissue may also be getting that message. “We just don’t know,” O’Herron says.

With this new grant he is collaborating with former colleagues at the Medical University of South Carolina who developed a genetically modified mouse whose blood vessel size can be controlled with light. That mouse enables him to restrict the amount of blood coming into an active brain area and study what happens to the neurons.

He is visualizing both the neurons and the blood flow via a tiny hole in the skull with the help of the two photon microscope that can see things down to 1 micron, or about .00004 inches. Neurons in the brain typically range in size from about 4 microns to 100, and the red blood cells that carry oxygen are about 5 microns.

While a faculty member at the MUSC in 2016, O’Herron was first author on a study in the journal Nature that was among the first published reports that a larger than expected brain area receives increased blood flow in response to increased neural activity.

fMRI is considered an indirect look at the location and level of active neurons, primarily by measuring changes associated with blood flow. It was actually fMRI that helped show that with increased neuron activity oxygen levels actually increase. It was expected that oxygen levels would instead  decrease in active areas because busy neurons were using more oxygen.

The protein hemoglobin inside red blood cells carries oxygen and hemoglobin that’s carrying oxygen has different magnetic properties than hemoglobin that has already given it up, which is what fMRI picks up.

Blood flow response is actually slower than the neuron response so it takes maybe five seconds for the blood flow to hit a peak and another 15 seconds to go back to baseline, says O’Herron, whose basic science studies indicate that blood flow rates stay elevated slightly longer than the neural activation that prompted them.

Different parts of our brain are off and on all the time, O’Herron notes, and blood flow is pretty consistent in a healthy brain, so it’s a significant stimulus that will drive neuron activity way up and blood flow a bit up, he says.

In disease, some think that the neuron damage that occurs in Alzheimer’s , for example, is from the brain cells not getting the blood and oxygen they need, and the injury is compounded by not being able to clear the resulting damage since adequate flow is also needed to carry off byproducts. Others think the neural damage comes first. So one of the many things O’Herron wants to know is if the mice in his studies start to look like an Alzheimer’s model. Do neurons become less responsive, even die without this natural increase in blood flow that appears like overkill?