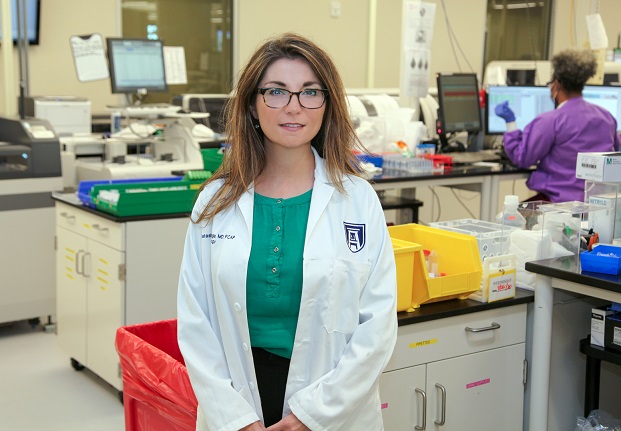 Dr. Natasha Savage, residency program director in the Department of Pathology at the Medical College of Georgia, has been named the department’s vice chair for academic affairs. She also is the new chief of staff elect at the medical school’s teaching hospitals, Augusta University Health.

As vice chair, Savage will help oversee the department’s academic endeavors, including continuing to direct the residency program, engaging residents in scholarly pursuits, advising medical students who are pursuing a career in pathology and helping build out the pathology and hematology parts of MCG’s new curriculum. As chief of staff elect, she chairs the credentials committee, which oversees the credentialing of practitioners and works with the hospital’s Medical Executive Committee to grant specific privileges to practice medicine in AU Health facilities.

In addition to leading the Pathology Residency Program, she is the health system’s medical director of hematology and hematopathology, overseeing the hematology, bone marrow, flow cytometry and hemostasis labs at AU Medical Center and the Children’s Hospital of Georgia.

She is a member of the College of American Pathologists, serving as the group’s commissioner for the State of Georgia and as vice chair of its Hematology and Clinical Microscopy Resource Committee. An honored educator, she has received multiple MCG Exemplary Teaching Awards for Undergraduate Medical Education.

Savage was an honor graduate of the University of Georgia, where she earned her bachelor’s degree in biology. She earned her medical degree in 2007 and completed an anatomic and clinical pathology residency in 2011, both at MCG. She completed a fellowship in hematopathology at Stanford University Hospitals and Clinics before returning to the faculty of her alma mater in 2012.

Written by Jennifer Hilliard Scott
Acute flaccid myelitis – what you need to know to keep your kids safe
FacebookTwitterPinterestWhatsApp
What’s happening at Augusta University next week? Story ideas for Sept. 14-18