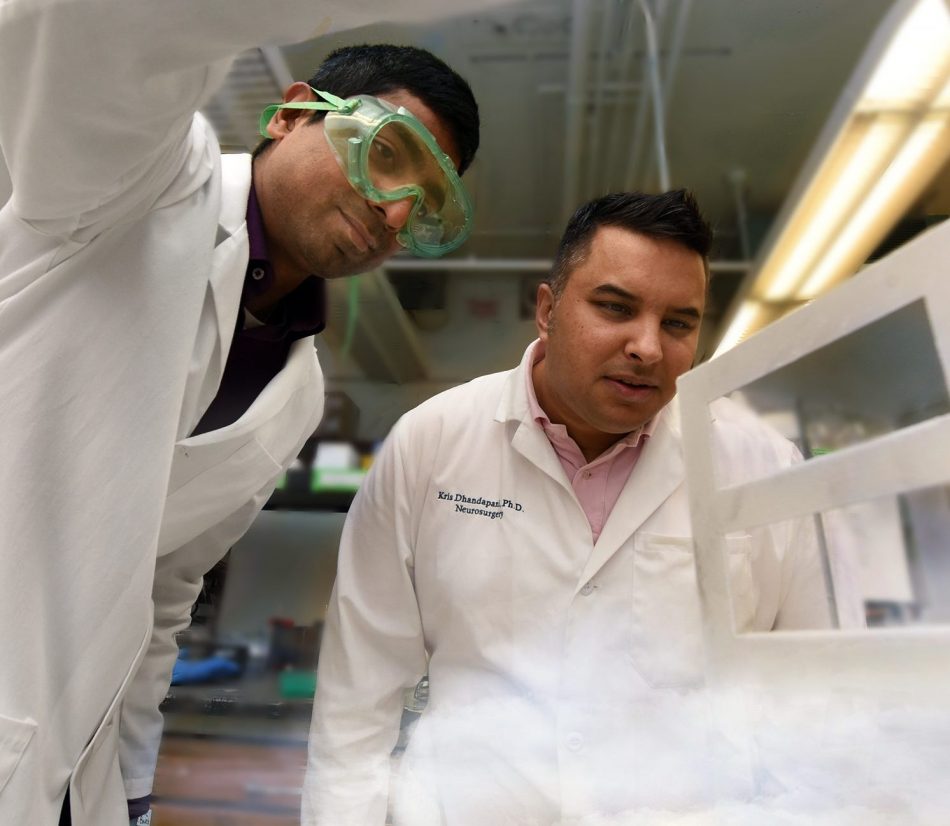 AUGUSTA, Ga. – A receptor on our immune cells that can detect both the heat of a red chili pepper and the extreme physical heat of a pizza oven may help protect the brain following a traumatic brain injury, scientists say.

A third of patients hospitalized with a TBI die from damage that is actually secondary to the collision on a football field or highway that caused their initial head trauma, says Dr. Kumar Vaibhav, research scientist in the Department of Neurosurgery at the Medical College of Georgia at Augusta University.

He is looking to find whether activating the receptor – transient receptor potential vanilloid-1, or TRPV1 – on the immune cells that rush to the ailing brain, can reduce the lingering  inflammation associated with problems like poor cognition and depression in the aftermath of a TBI.

Vaibhav was recently awarded a $304,000 Early Investigator Award from the National Institute of Child Health and Human Development that’s helping him determine whether TRPV1 is an apt switch.

Some brain cell loss and increased immune activity are essentially a given in the aftermath of a TBI, Vaibhav says. Immune cells called macrophages are some of the first to arrive. Macrophages are known for their ability to consume whatever cellular debris is left behind and clear the path for healthy brain cells to communicate, he says.

Their anti-inflammatory counterparts, M2s – better known for their ability to aid repair and recovery and typically in the majority in a healthy brain – now take a back seat, Vaibhav says. M2s also don’t last long.

No macrophages live very long actually, about three days, but with more M1s sending signals, called inflammatory cytokines, back to the bone marrow to send along more backups, their superior presence can persist.

“M2s are present in small numbers and cannot produce enough anti-inflammatory cytokines so there is no signal to replenish them,” Vaibhav says.

As days pass, M2s essentially become ineffective, and the enduring inflammation prompted by their counterparts begins to damage healthy or slightly injured cells nearby, which is believed to increase potential deficits caused by the TBI.

“You need to clean up the debris before you can recover, that is where you get this pro-inflammatory response,” says Dr. Krishnan Dhandapani, neuroscientist in the MCG Department of Neurosurgery. “The problem is when it’s cleaned up and these pro-inflammatory macrophages are still there for some reason.” In fact, the chronic low-level state of pro-inflammation can persist for decades.

Vaibhav has evidence that activating TRPV1 can help change the macrophage landscape by taking advantage of their natural adaptability and transforming M1s into M2s. He has some evidence that other immune cells, like the T cells, key drivers of the immune response, may be similarly transformed by activating TRPV1.

“I think the key is the immune system needs to be balanced,” says Dhandapani, noting the seesaw effect on the macrophage population that happens following injury.

“This is not just about making everything anti-inflammatory,” says Dhandapani, who has been a mentor to Vaibhav and is a consultant on the grant. “It’s about timing and balance.”

Like bouncers at 2 a.m., the scientists think more M2s are needed at some point to tell M1s that it is time to go.

One way Vaibhav is activating TRPV1 in his mouse model of TBI is with the red chili pepper extract capsaicin.  Red chili peppers are thought to contain capsaicin to protect themselves from being eaten by insects and by us. The compound already is used in some topical pain medicines because it’s known to also mediate pain and inflammation and activate TRPV1.

To confirm the role of TRPV1 in helping regulate immune response and recovery after a TBI, Vaibhav is also studying mice missing the receptor.

Studies of the immune system in the brain are relatively new in science since for years, the dogma was that the brain was immunoprivileged, the scientists say.