New target could prevent progression of liver damage to cancer 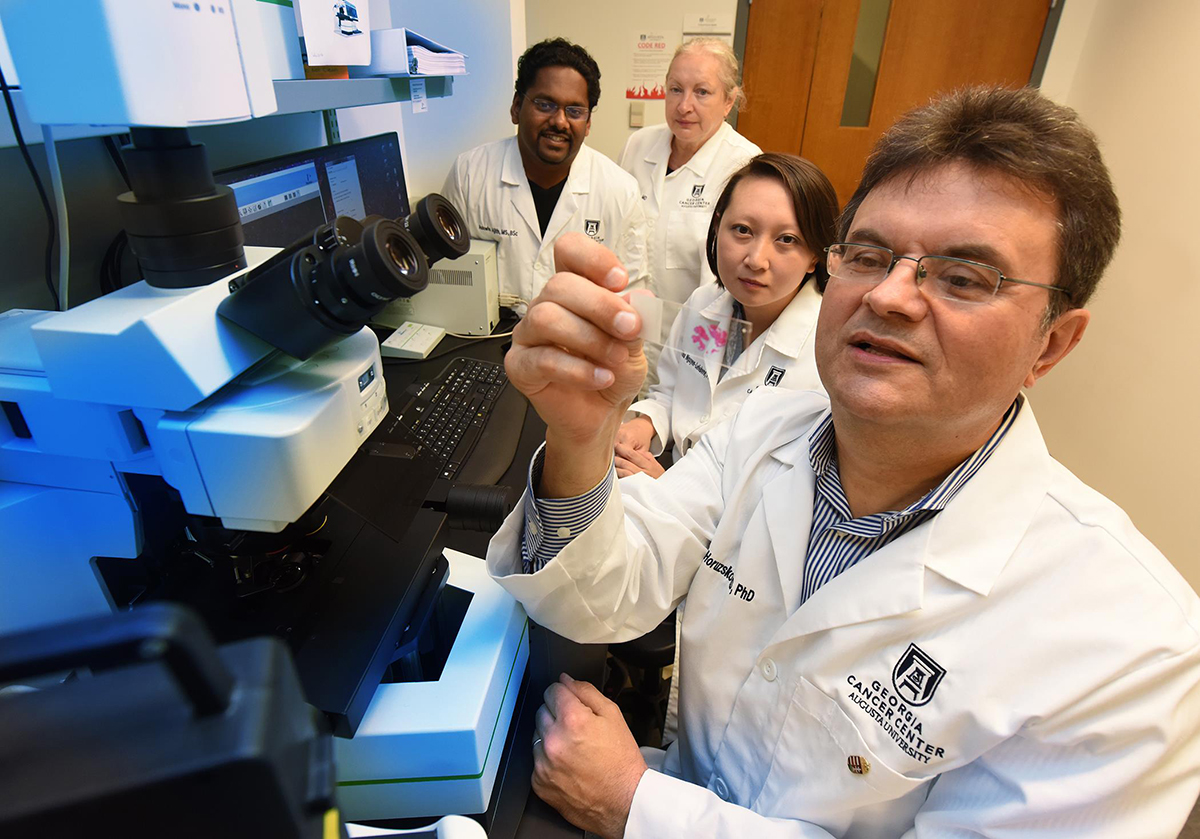 AUGUSTA, Ga. (Aug. 27, 2018) – Problems like obesity and alcoholism appear to chronically trigger in the liver a receptor known to amplify inflammation in response to invaders like bacteria, scientists report.

The relentless, increased activity of TREM-1 in turn accelerates injury and scarring of the liver, a first step toward cirrhosis and liver cancer, says Dr. Anatolij Horuzsko, reproductive immunologist in the Georgia Cancer Center and Department of Medicine at the Medical College of Georgia at Augusta University.

TREM-1, or triggering receptor expressed on myeloid cells-1, is known to help turn up inflammation short-term to help us deal with external invaders. It has increased activity immediately after an injury as well, when increased inflammation, damage cleanup and collagen production aid healing.

But Georgia Cancer Center scientists report in the Journal of Clinical Investigation the first evidence that when activated by chronic offending agents, like obesity and hepatitis, TREM-1 instead contributes to a destructive level of inflammation that results in liver damage and possibly cancer.

The unhealthy transformation can occur in five to 50 years, depending on factors like the level of insult, and may be largely reversible up to the point of cirrhosis, if the offending agent is stopped, and the liver’s natural ability to regenerate takes over.

Horuzsko and his colleagues think TREM-1 could one day be another point of intervention, possibly with a drug that could return TREM-1 activation to normal levels on resident, garbage-eating, watchdog immune cells called Kupffer cells.

They already are doing experiments with a drug that, because of its structure, should enable tamping down of TREM-1, but long-term goals include a drug that would target this receptor on Kupffer cells.

It’s known that inflammation is a key process in the thickening and scarring of the liver called fibrosis, and that tamping down inflammation can help prevent fibrosis progression. But just how inflammation and fibrosis happen at the cellular and molecular level is largely unknown, say Horuzsko, the study’s corresponding author.

Their work in both animal models and human tissue indicate TREM-1 is essential to both.

In the liver, TREM-1 is found primarily on Kupffer cells, the liver’s resident macrophages, as well as monocytes, a type of white blood cell that can also become garbage-eating macrophages.

TREM-1’s expression is limited in a healthy human liver but its activation goes up short-term following an insult, like a laceration.

To look at what happens in the face of a chronic problem, the scientists created a model of chronic liver disease – like obesity or high alcohol consumption might – using carbon tetrachloride, a poisonous solvent found in oils, varnishes and resin. They found TREM-1 activation went up and stayed up on a larger number of Kupffer cells in the liver as well as other immune cells circulating in the body.

When they deleted TREM-1 from the model, it reduced inflammation, injury and subsequent fibrosis. When they gave TREM-1 back to the mice, inflammation and related damage came back with a vengeance, leading them to dub TREM-1 the main target that drives fibrogenesis.

They found TREM-1 even recruits other pro-inflammatory cells from the bone marrow to the liver, many of which could become macrophages as well, which further multiplies the inflammation, liver cell damage and death.

“This creates a loop,” says Horuzsko, of increased activity on many fronts. “This creates chronic inflammation – with no bacterium or virus involved – which is important to the development of liver disease.”

As liver cells die in the face of chronic inflammation, they release their innards, called damage associated molecular patterns, or DAMPs, when they get outside the cells. DAMPs further activate TREM-1 on the macrophages and the damaging momentum builds, he says.

That’s where collagen and fibrosis set in. Stellate cells in the liver are normally quiescent and mainly store vitamin A. When TREM-1 gets activated on the macrophages, it also activates the macrophages themselves which, in turn, activate stellate cells.

Stellate cells literally change their shape, release vitamin A and start to make collagen. Collagen is a component of connective tissue that typically helps hold tissues and blood vessels together and aids wound healing. The liver already has some collagen, but in this scenario too much gets deposited and liver function suffers.

“Efficiency goes down and it causes additional damage to liver cells that already have been damaged by something like hepatitis or obesity,” Horuzsko says. The liver of a patient with cirrhosis, for example, is overrun with collagen, he notes.

Blood levels of the enzymes alanine aminotransferase, or ALT, and aspartate aminotransferase, or AST, are indicators of liver injury and both went up and remained high in their models. However, in mice where TREM-1 was knocked out, rates went up only short- term before returning to pre-injury levels, another indicator of TREM-1’s role in persistent inflammation and resulting damage, Horuzsko says.

They also found that while mice with and without TREM-1 both recruited additional immune cells, such as more macrophages and monocytes, from their bone marrow immediately after the injury, 72 hours later the levels were much higher both in the blood and livers of the mice that also still had TREM-1.

To look further at the role of Kupffer cells when TREM-1 is out of the picture, they first removed the cells from both mice models, then gave Kupffer cells that contained TREM-1 back to both, and both were able to cause localized damage and recruit immune cells from the marrow to further bolster inflammation. But when they put TREM-1-deficient Kupffer cells back in normal mice, the exaggerated inflammation and liver damage did not happen.

“TREM-1 is a molecule that can be very dangerous and is normally very controlled in the body,” Horuzsko says. In fact, one of the diagnostic criteria for body-wide infection, or sepsis, is the level of TREM-1 protein in the fluid portion of a patient’s blood. And, in hepatitis B related liver cancer in humans, high levels of TREM-1 expression on stellate cells is considered an indicator of poor prognosis.

“The balance in our body is very, very tightly regulated and important. Alcohol, obesity, hepatitis viruses all change the balance,” Horuzsko says.

The scientists suspect their findings of TREM-1 gone wild will hold true in other organs including the lungs, heart and kidneys, which also have TREM-1 on their macrophages.

Liver cancer rates have risen dramatically in the United States, 43 percent in men and 40 percent in women, from 2000-16, according to a report released this summer by the Centers for Disease Control and Prevention. In May 2017, the CDC reported that newly reported cases of hepatitis C tripled between 2010-15 and the American Cancer Society says liver cancer rose from ninth to the sixth leading cause of cancer death from 2000-16.

The most common causes of liver cancer include infection with the hepatitis B or C virus, heavy alcohol use, obesity and diabetes, according to the CDC.

The liver is part of the gastrointestinal tract and filters blood coming from the GI tract before the blood circulates to the rest of the body. Its myriad of functions include secreting bile, which helps us absorb fats and eliminate waste; producing cholesterol, triglycerides and blood clotting factors; and detoxifying chemicals.  The liver is the heaviest solid organ in the body and sits on the right sight of the body behind the lower ribs.

The research was funded by the National Institutes of Health.