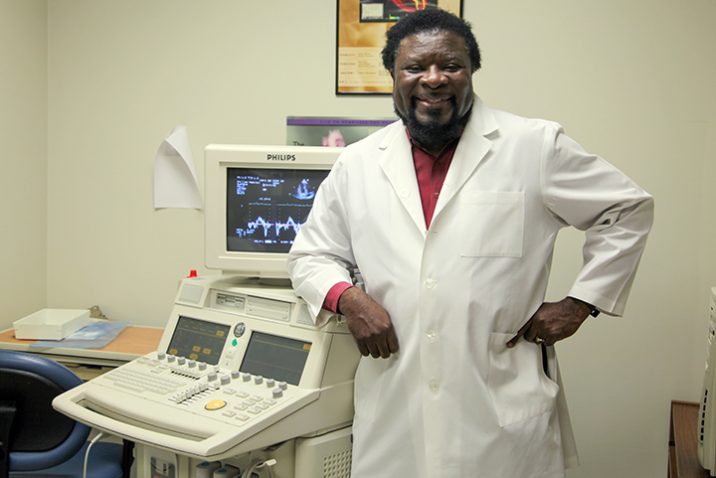 While a slow resting heart rate is generally considered a good thing, investigators have some of the first evidence that if that rate decreases rapidly as children move into young adulthood, it’s an indicator that cardiovascular disease may be in their future.

Medical College of Georgia investigators report a significant association between a faster decrease in resting heart rate from childhood to adulthood and a larger left ventricle, the heart’s major pumping chamber, over a 21-year period in hundreds of individuals who were healthy at the start.

The faster decrease in heart rate also was associated with a higher level of pressure inside the blood vessels of the body, which the heart has to pump against to get blood and oxygen out, they write in the journal Acta Cardiologica. The associations were generally stronger in Blacks.

“An unexplained drop over time is not a good thing,” says Dr. Gaston Kapuku, cardiovascular researcher at MCG’s Georgia Prevention Institute and the study’s corresponding author.

Looking at the resting heart rate at one moment in time, as opposed to how it trends from childhood to adulthood, is not a good thing either, Kapuku says.

The investigators looked at the resting heart rate up to 15 times over 21 years in 759 participants in the Augusta Heart Study, a longitudinal study designed to evaluate the development of risk factors for cardiovascular disease as children, with starting ages of 5-16 , grew into adulthood.

Enrollees included a near equal mix of Blacks and whites, and had a minimum of three resting heart rate measures taken over the course, and more than half had eight measures or more. Investigators also collected other longitudinal data like height and weight, body mass index, blood pressure and cardiac output.

Echocardiograms of the left ventricle also were available for 546 of the study participants over time. Like most muscles, the left ventricle tends to get bigger in response to working harder, like continuously pumping against higher blood pressure, but unlike other muscles, bigger does not translate to a stronger heart.

“Your heart gets bigger so that in one beat, it pumps out more volume,” until it doesn’t, Kapuku notes. After years of working too hard for too long, the extra work and enlarged heart mass can result in congestive heart failure, which also affects Blacks disproportionately.

That means that unless it can be explained by extreme aerobic activity, significant drops in heart rate over time likely indicate a population at increased cardiovascular risk who may benefit from medications or a pacemaker to help normalize the rate, the investigators say. Exercise might also help intervene in these individuals, Kapuku notes.

A wide range of resting heart rates, 50 to 90 beats per minute, are considered normal. And both slight increases and decreases in resting heart rate have been reported as normal as we move from young to older.

But little is known about the clinical significance of heart rate trajectory patterns from childhood to young adulthood, Kapuku says.

“You should have a wide normal range of action,” Kapuku says, yet, as with many cardiovascular studies, young Blacks seem most at risk, and understanding why is something they are digging into, he says.

The association they have now found between a rapidly slowing resting heart rate, higher peripheral resistance and a larger ventricular mass is another “cardiovascular conundrum” that needs more exploration, they write.

Echocardiography was used to measure the left ventricle in 546 of the participants.

Rapid heart rate declines also were associated with higher total peripheral resistance — the resistance of blood vessels to blood flow, which the left ventricle must pump against.

Written by Toni Baker
Augusta University Health System Board, committees to meet April 22
FacebookTwitterPinterestWhatsApp
Listen: Get ready for Augusta Gives with ‘In the Wild’ podcast