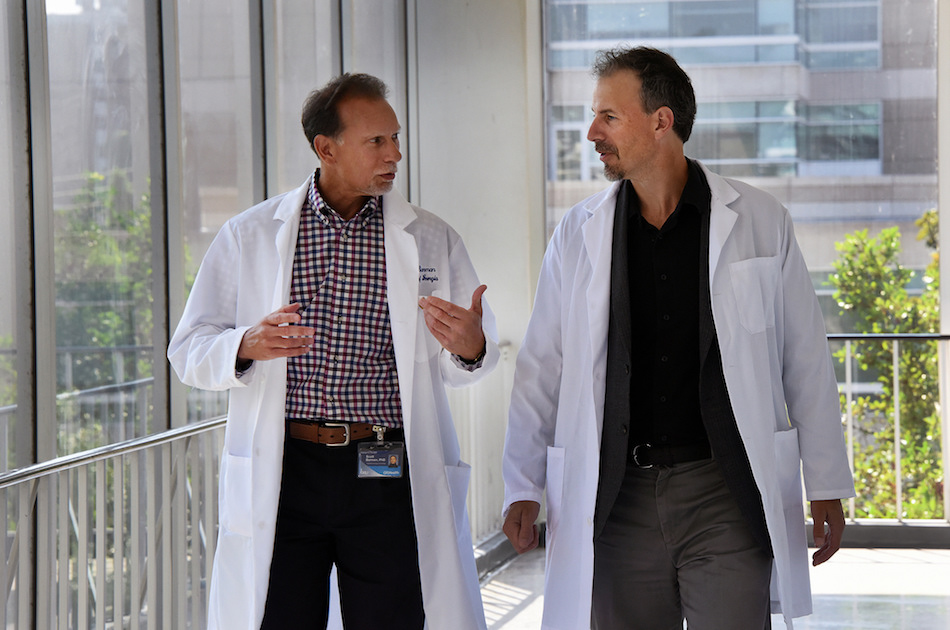 Pulmonary hypertension is a highly lethal disease that transforms the thin, flexible vasculature of the lungs into thick, dysfunctional blood vessels that can kill.

Scientists believe that a protein highly expressed in the deadly disease is a major culprit as well as a potentially effective new treatment target.

They also have early evidence that a drug already in human studies for liver fibrosis can block or turn around early disease, said Dr. David Fulton, director of the Vascular Biology Center at the Medical College of Georgia at Augusta University.

Fulton and Dr. Scott Barman, pulmonary vascular biologist in the MCG Department of Pharmacology and Toxicology, are principal investigators on a $2.2 million National Institutes of Health grant that will enable them to better understand how the protein galectin-3, or gal-3, helps cause chronic, unhealthy remodeling of the lungs’ blood vessels and maybe a way to stop it.

In humans as well as an animal model of the disease, the MCG scientists found increased gal-3 expression particularly in the media, the smooth muscle-rich middle layer of the artery that normally helps give blood vessels strength and flexibility. They’ve shown that, at least in culture, increasing levels of gal-3 increases unnatural proliferation and survival of these human smooth muscle cells, while silencing gal-3 decreases it.

“Excessive constriction makes the vessels small in the first place; inflammation and remodeling make it a permanent anatomical alteration,” said Barman. Right heart failure is typically what kills patients, as that side of the heart is continually overtaxed trying to force blood inside the now-narrowed pulmonary arteries.

“The lung circulation is a high-capacity, low-resistance environment,” said Fulton. “Any increase in resistance to blood flow is really damaging.” There are a variety of causes. A small percentage of cases are idiopathic, or have no known cause, but known risk factors include heritable genetic mutations; heart disease, including congenital heart disease; emphysema; connective tissue problems such as lupus and scleroderma; obesity; drug side effects; and being female. Symptoms may include shortness of breath, dizziness, fatigue, a racing pulse, even chest pain and pressure. The blood vessels are too tiny and numerous to reopen once damaged. Rather, treatment includes vasodilators that may only extend life by a few years; a lung transplant is the final option. Stopping or somehow reversing the deadly chronic remodeling is the most important target now for scientists like Barman and Fulton.

Gal-3 is implicated as well in cancer, kidney fibrosis and liver fibrosis, diseases in which there also are excessive, unhealthy growth patterns, Barman said. A key goal of their new studies is not only blocking excessive gal-3 levels in pulmonary hypertension, but figuring out why the smooth muscle cells are committed to making the excessive levels. “Where is it coming from and where is it hitting?” Barman said.

They also want to identify epigenetic mechanisms, which underlie enduring changes in cell function that are thought to explain many of the wayward behaviors of cells in disease states.

As they put together the puzzle of how this disease happens, they also are looking at whether the gal-3 inhibitor they have been studying, GR-MD-02, continues to be effective at reversing or stopping the disease. Barman and Fulton are collaborating with Atlanta-based Galectin Therapeutics Inc. and its chief medical officer, Dr. Peter G. Traber, to look further at the gal-3 inhibitor the company developed and is now testing in humans with liver fibrosis.

While the inhibitor doesn’t directly lower the gal-3 levels, it blocks its action, Fulton said. Ongoing studies will better determine optimal doses, and they have seen significant early disease reversal with the doses they have used, Barman said. Those findings were presented at the recent American Thoracic Society International Conference.

With treatment, smooth muscle cell growth normalizes, blood vessels relax and their opening, or lumen, widens. The new studies will include more severe models of disease that more closely reflect the stage at which many patients are diagnosed.

“The more we can reverse it later in disease, the more applicable the therapy becomes,” Barman said, since by the time patients become symptomatic, the disease is fairly advanced. They also want to better identify the drug’s points of action, which are unknown in the pulmonary circulation.

Growth and inflammation are necessary and important short-term in wound healing. “In normal wound healing, that goes away; in pulmonary hypertension, it just consolidates and gets worse,” Fulton said, noting that under healthy circumstances, expression of gal-3 is low and its role largely unclear.