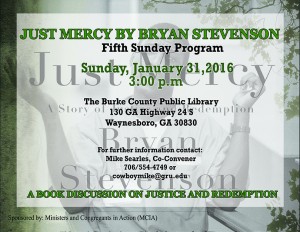 “Each of us is more than the worst thing we’ve ever done,” reads a passage in Bryan Stevenson’s book Just Mercy.

On Sunday, Jan. 31, Stevenson will be at the Burke County Public Library to talk about Just Mercy. Professors from Augusta University’s Department of Sociology, Criminal Justice and Social Work will participate in a book discussion on justice and redemption.

“I believe everyone should read this book because it speaks to much of the disadvantage and prejudice in our system,” Griffith said. “I think Bryan Stevenson has a way of telling his clients’ stories that makes you want to invest in them and their freedom.”

Much of Stevenson’s work is with juveniles who were tried as adults and sentenced to death. Just Mercy examines this and addresses the concept of compassion in the pursuit of justice.

“In Just Mercy, the stories of the juveniles are the most heart wrenching,” Griffith said. “Reading this before the Supreme Court ruled that Miller v. Alabama was retroactive made it sadder. There are several juveniles serving life without parole for a crime they may have committed when they were 13-17.”

The Supreme Court ruling in Miller v. Alabama stated that it was unconstitutional to sentence an individual to life without the possibility of parole when the individual was under the age of 18 at the time of the crime. 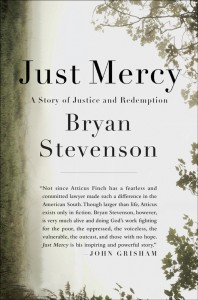 “If you are at all concerned about justice in the United States, attending this event will help one understand where we can start and the magnitude of the problem,” she said. “People should be punished for the crimes they commit. This event will explore what is reasonable punishment and what is the purpose for that punishment.”

Just Mercy is a New York Times best seller and has also been named one of the best books of the year by the New York Times, Washington Post, Boston Globe, Seattle Times, Esquire and Time magazine. It has also won multiple awards, including the Carnegie Medal for nonfiction and the NAACP Image Award for nonfiction.

The Fifth Sunday book discussion will begin a 3 p.m. on Sunday, Jan. 31. The Burke County Public Library is located in Waynesboro, Georgia. For more information, contact Mike Searles at 706-554-4749 or cowboymike@gru.edu.

Written by Brennan Meagher
What if we told you 10 minutes of your time was worth an iPad mini?
FacebookTwitterPinterestWhatsApp
From Refugee to DNP: The story of Quyen Phan (Final )