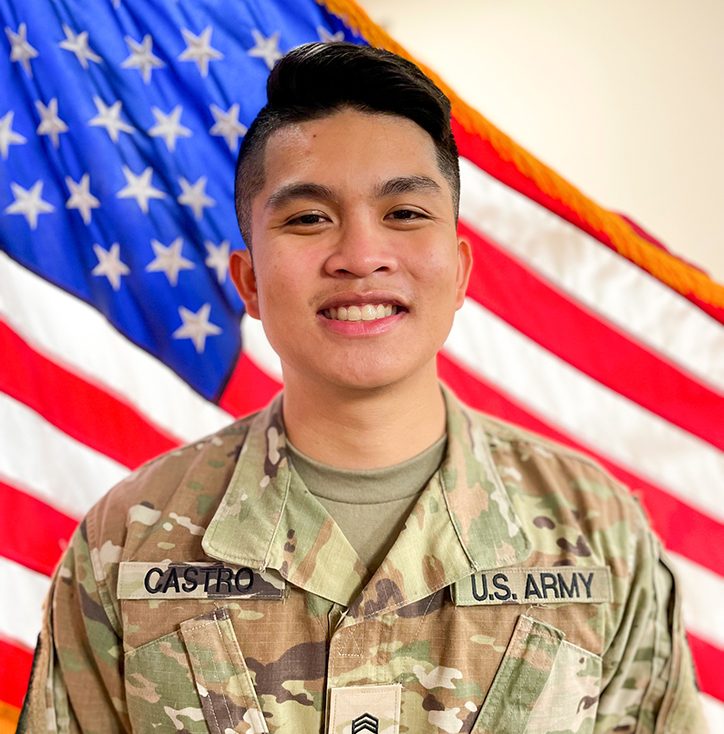 Each month, Jagwire features a cadet who is enrolled in Augusta University’s ROTC program and is a member of the Jaguar Army ROTC Battalion. For December, we spoke with Jose Castro.

I am from Lillington, North Carolina, where I attended Western Harnett High School up until my senior year, which ended up being in Evans, Georgia, at Lakeside High School, where I graduated.

I chose to attend Augusta University because I heard about it during my time at Lakeside High School. I heard it had a computer sciences program as well as an Army ROTC program. With my family moving back to North Carolina following my graduation and with COVID still around, I didn’t really know where to go, but thankfully I decided upon Augusta to further my education.

I became interested in ROTC by being able to take JROTC in high school. I loved all the memories I got to make as well as the people I was able to meet, which is why I wanted to continue in college. Being in an all-military family (brother in the Air Force, stepdad in Army Special Forces, and mom teaching Special Forces), I really didn’t have much of a choice anyways.

I chose to pursue a degree in cybersecurity because I believe that the future is in technology, more specifically in the cyber world. With the recent innovations in the field, job security in cybersecurity is at an all-time high, which is what I dream to do after the military.

I plan on staying in the military for a while and hopefully have the chance to retire after a full 20-year service to my country.

One big misconception in ROTC is that it’s only training to be in the military after graduation. While it is true that many of the Cadre wish to produce as many good and effective leaders in the Army, the biggest thing ROTC can give to anyone, in my opinion, is the ability to improve on people’s leadership ability and confidence in their everyday lives.

One thing that has been a hard adjustment is the ability to manage being a student, employee, as well as a cadet all in one. With classes only getting harder, work still long, and responsibilities as a cadet still rising, it is always a fun time trying to balance everything.

I think the most exciting thing about being a part of Jaguar Nation and most importantly, a part of the Jaguar Battalion, is the opportunities for change. Every semester, I have the honor to witness great change throughout the university, whether it be through new buildings or events and clubs. It is always a wonderful feeling to see and be a part of the positive change that is taking place at Augusta University.