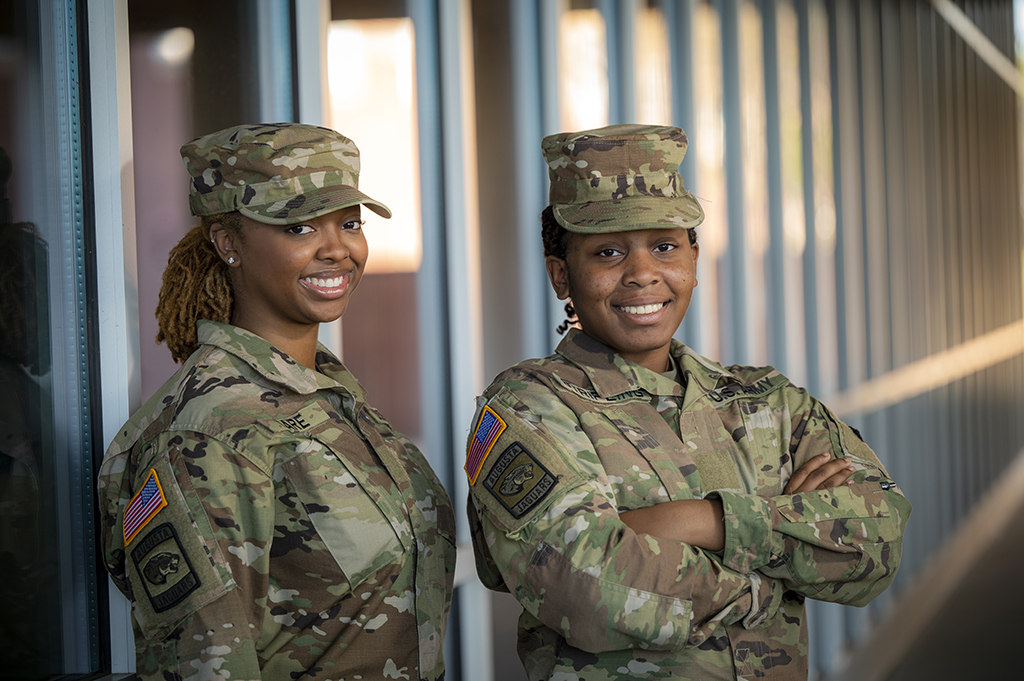 Pride of the Jaguar Battalion: Deja Hare and Chloe Stripling

Each month, Jagwire features a cadet who is enrolled in Augusta University’s ROTC program and is a member of the Jaguar Army ROTC Battalion. For November, we spoke with two students: first-year cadets Deja Hare and Chloe Stripling.

Hare: I moved here to Augusta when I was 5 years old and later attended and graduated from Davidson Fine Arts Magnet School.

Stripling: I am from Atlanta and I attended South Gwinnett High School.

Hare: I chose Augusta University because I’ve always heard about the great nursing program that they have and I also wanted to stay close to home.

Stripling: I have always been interested in Augusta University since I was a freshman in high school. I fell in love with the medical program and its environment. I always had the thought of Augusta University in the back of my mind. And when Lt. Col. Jeffrey Keenan gave me the opportunity to attend the school and flourish in the ROTC program, right then and there, I knew Augusta University was for me.

Hare: My mom served in the military and my dad is still currently serving, so growing up with military parents, I was always interested to see how the military life would be like for me. My high school didn’t offer JROTC, so I wanted to take the opportunity here at AU, where I actually earned an ROTC scholarship to help further my education.

Stripling: I have been in programs dealing with the military since I was in middle school — those programs being JLC, JROTC and the physical training team called “Raiders.” I was ecstatic when I was offered the opportunity to be able to still do what I wanted to do, which is serve our country and participate in the ROTC program in college.

Hare: I thought I made up my mind about majoring in pre-nursing before I graduated high school because I have the heart to want to care and do for people as best as I can. Then, I got injured and had to go to physical therapy for a few months and that sparked something new because of how much I appreciated my physical therapist. So just recently, I have made the decision to change my major to kinesiology with a concentration in exercise science in hopes to become a physical therapist.

Stripling: Helping people has always been a passion of mine. Ever since I was a young adolescent, I always wanted to do something in the medical field, and from there I always had a set path for my life. Nothing would bring more joy then being able to earn a degree in nursing. It has always been a life goal.

Hare: I plan to commission and serve for 20 years.

Stripling: I plan on commissioning as an officer and being in the Medical Corps. I also plan on leading people to safety and making sure all missions are done with excellence. My goal is to come in the military and work hard and see all the fruits that come from it.

Hare: A big misconception about being in ROTC is that you can’t enjoy anything else while in college. To prepare yourself to become a great soldier and a great leader, it takes determination, grit and commitment, but it’s not consuming. It can be balanced with your other wants, whether that’s joining clubs, pledging in a sorority or fraternity, or simply just having friends outside of ROTC.

Stripling: I thought it would be challenging and not the most enjoyable. But I found out very quickly that is quite the contrary. I have so much fun in the program and it has already taught me so much. I am starting to learn time management and to never give up, even when things seem challenging.

Hare: One of the hardest adjustments for me is the early morning PT because I never considered myself a morning person. I always feel better after PT, but getting up and going is the hardest part.

Stripling: I would have to say learning all the terminology for the military. Everyone does such a great job of explaining different skill sets that we must acquire before the military, but I do find difficulty in trying to grasp all the military acronyms. It will just take time, nothing too major.

Hare: I am most excited just to learn. Having military parents doesn’t teach you the ins and out of everything, so to get the knowledge and experience for myself is what I look forward to.

Stripling: I am mostly excited about the new relationships I am building and the growth I will acquire while in the program.