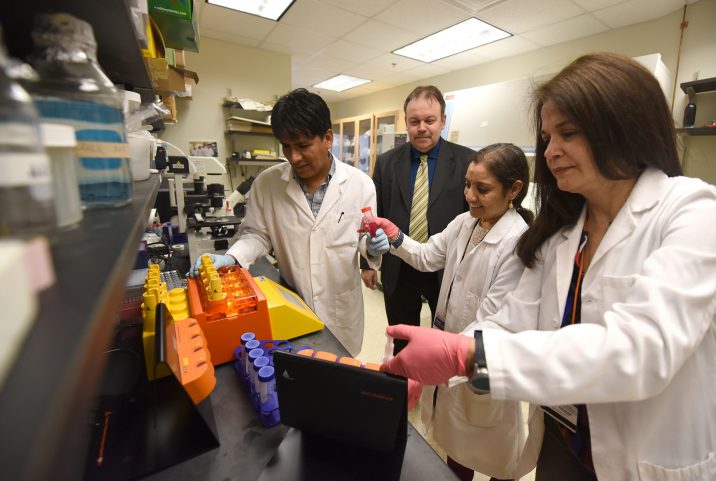 A synthetic peptide appears to directly disrupt the destructive inflammation that occurs in nephritis, enabling the kidneys to better recover and maintain their important functions, investigators report.

Whether they gave the peptide body-wide or delivered it directly to the kidneys, it reduced the movement of immune cells into the kidneys, resolved inflammation and damage and improved kidney function, without increasing blood pressure, they report in the journal Kidney International.

Things like a serious infection or injury, and diseases like uncontrolled hypertension and diabetes, can cause acute or chronic nephritis, which affects both kidneys and the million filtering units in each. Particularly when it’s chronic, patients often wind up in kidney failure and on dialysis, which has basic scientists and physicians alike looking for better interventions.

So the investigators gave the peptide the same way it might one day be given to patients, within a few days of signs of kidney inflammation.  They found it enabled an animal model of moderate nephritis to avoid hallmark problems like excessive inflammation and protein in the urine, a sign of kidney dysfunction, says Dr. Rudolf Lucas, vascular biologist in the Vascular Biology Center at the Medical College of Georgia at Augusta University.

Levels of urea in the blood, a waste product from the body’s use of protein that should be eliminated by the kidneys, also dropped as did weight gain, largely from retaining urine, which also can occur with kidney disease.

In a model mimicking severe nephritis, which is essentially 100 percent lethal to the kidneys in humans and deadly to the mouse model, with treatment there was instead an 80 percent survival of the mice. “I think that is pretty promising,” says Lucas, the study’s corresponding author.

At later stages of the disease, low doses of the peptide also reduced the level of T cells, drivers of the immune response and inflammation, moving into the area. In fact, levels were essentially normal.

“The peptide appears to actually improve the general condition of the kidney over time,” Lucas says. In fact, he now wants to study whether the peptide can aid recovery from chronic kidney disease, which many patients experience if their kidneys are not completely destroyed by nephritis.

They say the peptide, which has already been tested in Europe in patients with acute lung injury, like pneumonia or trauma, and is being pursued in lung transplant patients as well, holds promise for a targeted therapy for acute nephritis.

Current therapies, like corticoid steroids, generally suppress the immune response, leaving patients at risk for infection and even cancer.

“We’ve been looking for a great way to treat this,” says Madaio, whose lab developed the antibody that delivered the peptide right to the kidneys. “In theory, this could take the place of the anti-inflammatory effect of steroids,” says Madaio. “That would be great.”

The TIP peptide Lucas developed is a synthetic version of the tip of tumor necrosis factor, or TNF, which, as its name implies, is known to target cancer. But TNF is also a primary instigator of destructive inflammation in nephritis.

In a mouse model of nephritis, they watched immune cells arrive in response to an attack on the kidney — in this case a toxin — which in turn generated a lot of TNF. TNF then activated two main inflammation-promoting pathways in the endothelial cells that line the million kidney filtering units, called glomeruli, in each kidney as well as the podocytes, cells that wrap around the tiny capillaries of the filtering units.  The most important of the inflammation-promoting pathways activated by TNF in this case are p38 MAP kinase along with NF-kB.

To worsen the scenario, TNF also decreased production of things like nitric oxide, a powerful blood vessel dilator that could help the kidneys recover, as well as prostaglandin E2, which can suppress the immune response and inflammation.

“This is how high levels of TNF are bad for us, and the consequence of this is now you get an increased protein in your urine and you will get increased renal inflammation and that is not what you want,” Lucas says.

They would find the TIP peptide directly counteracts those negative changes.

“If we give the TIP peptide, we restore basal levels,” Lucas says of prostaglandin E2, which in turn, induces nitric oxide. “So we restore two factors which are known to be protective in nephrotoxic nephritis,” he says.

While the more obvious route would be directly suppressing TNF, that might not be a good idea because of its important roles in fighting infections and other invaders, which is already a concern for current treatments, they say.

“We think a better approach might be factors that interfere with the deleterious TNF signaling, which induces the profound inflammation in the kidneys, without interfering with TNF’s defense role against bacteria,” Lucas says.

While the peptide’s activation of ENC-alpha in the lungs is a good thing in pneumonia where fluid literally interferes with breathing, the investigators were concerned that activating ENaC-alpha in the kidneys might disturb normal sodium retention, which is important to the kidney’s role in blood pressure regulation.

They found instead that the TIP peptide delivered directly to the kidneys not only reduced inflammation but actually decreased blood pressure, even in the face of a high-salt diet, and without interfering with the infection-fighting role of TNF.

Inflammation of the kidneys filtering units, called glomerulonephritis, is responsible for about 10-20 percent of the extensive kidney damage patients experience, although the affected pathway is common to many forms of progressive kidney damage.

“Your kidneys simply don’t function quite as well as any more,” Lucas says. “Your glomerular filtration goes down the drain, your body weight increases because you retain more urine. TNF is a crucial mediator of this pathology.”

TNF and another pro-inflammatory substance called interleukin 1, produce products like reactive oxygen species that damage both the filters and the elastic cells that wrap around their exterior.

Lucas recently received a $2.5 million grant from the National Institutes of Health to further pursue evidence that activating ENaC-alpha with his peptide can help eliminate deadly fluid buildup in the lungs that can occur in pneumonia. “This is a very different approach from the work in the lungs,” Lucas says of the new work in the kidneys.

“In the kidneys, the peptide directly interferes with a major cause of the problem which is p38,” Lucas says, noting that p38 is known to play an important role in cells that line blood vessels and the heart, and like those lining the glomeruli.

Madaio was corresponding author of a study this summer also in Kidney International that showed that using the same antibody, this time to deliver the anti-inflammatory protein kinase C-alpha inhibitor directly to the kidney, enabled the organ’s recovery in a similar model of nephritis. They also found that the kidney cell powerhouses, called mitochondria, are particularly impacted by acute and chronic inflammation and that the protein they delivered restored mitochondrial function.

There are about a million filtering units, called nephrons, in each kidney that  remove waste, acid and excess fluid from the blood, which get excreted into the urine. Nephrons also put good stuff, like nutrients, back into the bloodstream. The glomerulus, a cluster of blood vessels inside the nephrons, function as the actual filter.