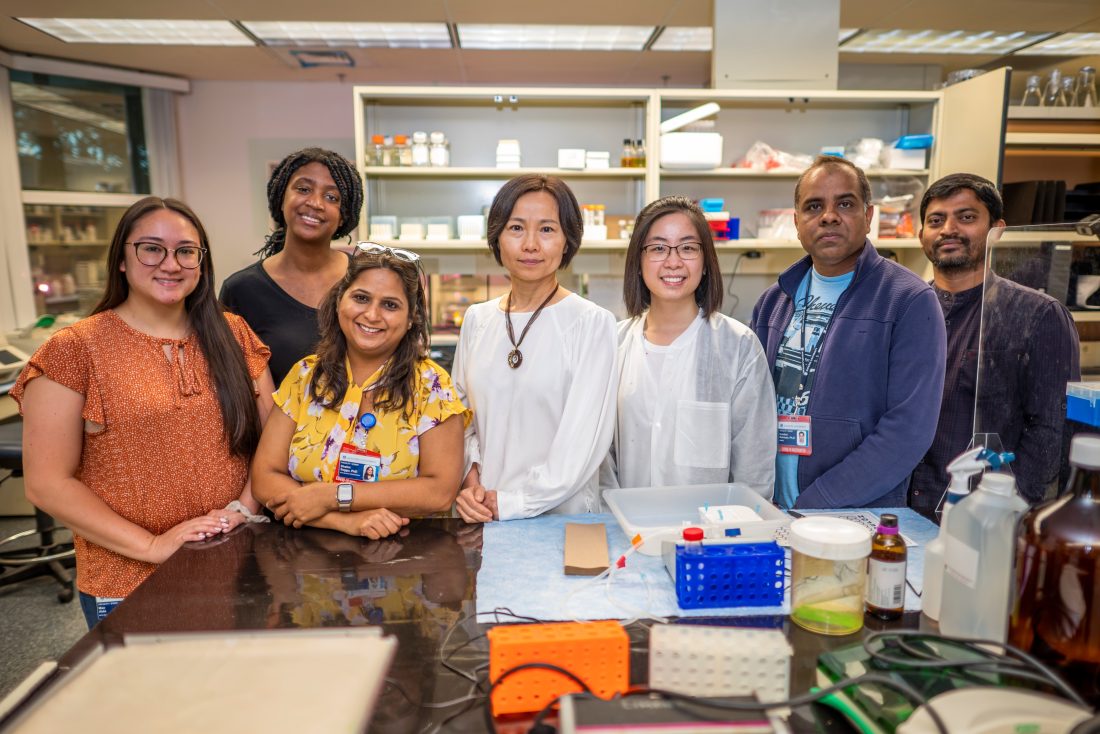 A novel peptide augments the brain’s natural mechanism to help prevent seizures and protect neurons in research models of both Alzheimer’s and epilepsy, scientists report.

The A1R-CT peptide the scientists developed, which can be administered through a nasal spray, holds promise for tamping down the uncontrolled electrical activity that is common after traumatic brain injury, stroke and which affects more than half of individuals with Alzheimer’s, says Dr. Qin Wang, neuropharmacologist and founding director of the Program for Alzheimer’s Therapeutics Discovery at the Medical College of Georgia at Augusta University.

The fact that it can be delivered through the nose indicates the peptide’s potential as a new seizure rescue medication as well, to help interrupt, for example, a seizure cluster, where disabling seizures are occurring back-to-back, says Wang, corresponding author of the study in the journal JCI Insight.

A1R-CT works by inhibiting neurabin, a protein that helps ensure that the protective mechanism itself, which tamps down the hyperexcitability of neurons that disrupts normal communication and produces seizures, doesn’t overdo, she says.

The peptide was named after the protective adenosine 1 receptor on the surface of neurons, which gets activated by adenosine, a chemical made mostly in the brain by neuron-supporting glial cells in response to hyperexcitability.

“This is a powerful receptor to then silence the neurons,” Wang says. This natural, calming relationship also is known to block electrical activity that can result in an irregular heartbeat. In fact, an injectable form of adenosine is used to treat a very high heart rate.

“But the A1 receptor itself has to be regulated because if it’s activated too much, you will fall asleep,” says Wang. “The neurons try to make sure everything stays in control and in most of us, it works pretty well. We don’t fall asleep at our desk. We don’t have seizures,” she says, noting that caffeine blocks the A1 receptor.

Alzheimer’s often is accompanied by seizures because the characteristic buildup of the proteins amyloid and tau in the brain disrupts communication between neurons, creates increased oxidative stress and resulting inflammation, and in response to the altered dynamic, neurons can become hyperexcited, she says. “In Alzheimer’s there are so many things that go wrong,” she says. Seizures can precede the cognitive decline in Alzheimer’s, and definitely contribute to it, Wang says.

A1 receptor’s activation by adenosine in this type of hyperactive scenario makes it seem like a logical treatment target for seizures. But the fact that it is so pervasive throughout the body, including in the heart, lungs and kidneys, makes potential extensive side effects likely.

Back to neurons’ desire for homeostasis, Wang and her colleagues were the ones who found that the protein neurabin, which appears to be primarily present in the brain, provides that balance to prevent hyperactivity of the A1 receptor.

The fact neurabin is primarily in the brain means that altering its activity should not have the potential body-wide impact of directly altering A1 receptor activity, Wang says.

“Neurabin is a brake, so it doesn’t do too much,” Wang says. “But now we need to remove it to unleash A1’s power.”

So, they set to work developing the peptide that could instead interfere with the A1 receptor and neurabin’s interaction and so enable more of the natural protective, seizure-reducing benefit.

A1 receptor activation tamps down the excited state of the neurons by modulating ion channels — proteins in the cell membrane that allow passage through the cell of other proteins — which help generate electrical signals. A result is so-called hyperpolarization, which means the neuron is less likely to fire an electrical signal. “The more polarized the neurons are, the harder it is for them to get excited,” Wang says.

A1 receptor activation also decreases the release of glutamate, a neurotransmitter produced by neurons that excites neurons. It also provides additional benefit to neurons by providing some protection from inadequate oxygen and blood supplies, which may occur in the case of an injury. The scientists have noted a dramatic reduction in death of neurons in their Alzheimer’s model, for example, with the use of their peptide.

Now they’ve shown that inhibiting neurabin — either by reducing it directly or with their peptide — enables increased action by A1C to reduce excessive electrical activity in the brain. They’ve shown the peptide is effective in both a mouse model of severe seizures and seizures in an Alzheimer’s mouse model. And it’s effective when directly injected into the brain or via nasal spray.

The scientists opted to look at nasal spray delivery to fully explore the peptide’s potential clinical benefit. They found a similar robust response in both the seizure and Alzheimer’s models.

Looking further at the impact of targeting neurabin, they found that mice with a neurabin deficiency had significantly shorter, less severe seizures and they all survived. Those with the normal neurabin levels intact experienced seizures lasting for up to 30 minutes and about 10% of the mice died shortly afterward. Blocking A1 receptor resulted in more severe seizures in the neurabin-deficient mice and increased the death rate to more than 50%.

Next steps include additional exploration of ideal doses and delivery times for specific conditions the peptide may be used to treat.

The scientific team also continues to tweak the peptide to ensure it functions optimally, and is pursuing funding needed to pursue clinical trials.

Wang, a Georgia Research Alliance Eminent Scholar, came to MCG in April 2021 from the University of Alabama at Birmingham, where she began the studies of A1 receptor and peptide development. She continues extensive collaboration with her colleagues at UAB on the studies who are coauthors on the new paper. First author Dr. Shalini Saggu is now also a faculty member in the MCG Department of Neuroscience and Regenerative Medicine.

Epileptic seizures are common after a traumatic brain injury; a stroke, which is considered an acquired brain injury; and with chronic neurodegenerative diseases including Alzheimer’s.

As much as 64% of the some 50 million individuals with Alzheimer’s experience seizures, the scientists write. Patients can experience generalized tonic-clonic seizures, in which they fall down, shake and become unresponsive. They can also experience focal onset seizures, which tend to be shorter and may include repetitive movement of the arms or legs, lip smacking and chewing.

Seizures are uncontrolled in about 40% of people, which indicates an urgent need for novel therapies, the scientists write, and current therapies tend to be less effective in individuals with Alzheimer’s. Left uncontrolled, seizures can produce brain damage and cognitive impairment.

Adenosine also is a building block of our DNA and a component of the cell fuel ATP.