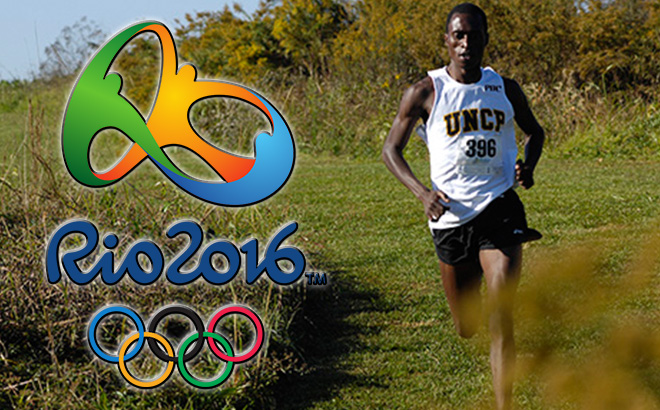 GRU Augusta cross country and track and field assistant coach and four-time all-American in cross country and track & field for the UNC Pembroke Braves from 2009-13 Pardon Ndhlovu has made his childhood dream a reality as he sprinted across the finish line of the Chevron Houston Marathon with a time of 2:16:51 to achieve an Olympic qualifying time for his native county of Zimbabwe on Sunday morning.

The time meets the “B” qualifying standard (2:18:00) for the 2016 Olympic Team Trials and all but ensures that Ndhlovu will be entered into the 2016 Games in Rio de Janeiro by the Olympic committee in Zimbabwe. Zimbabwe entered two marathoners into the London 2012 games, including Cuthbert Nyasango who finished seventh with a time of 2:12:08.

He maintained a 5:08 mile pace in the opening 5K of Sunday’s event and, at the halfway point of the race, had registered a time of 1:07:45. Despite slowing his mile pace to 5:25 at the 40K mark, he picked up his momentum and soared across the finish line in 10th place.

In December, Ndhlovu posted a time of 1:07.02 to take top honors at the Orlando Utilities Commission (OUC) Orlando Half Marathon ahead of 3,327 other runners at the event, including the winner of the 2014 Disney World Marathon whom he out-paced by nearly a minute.