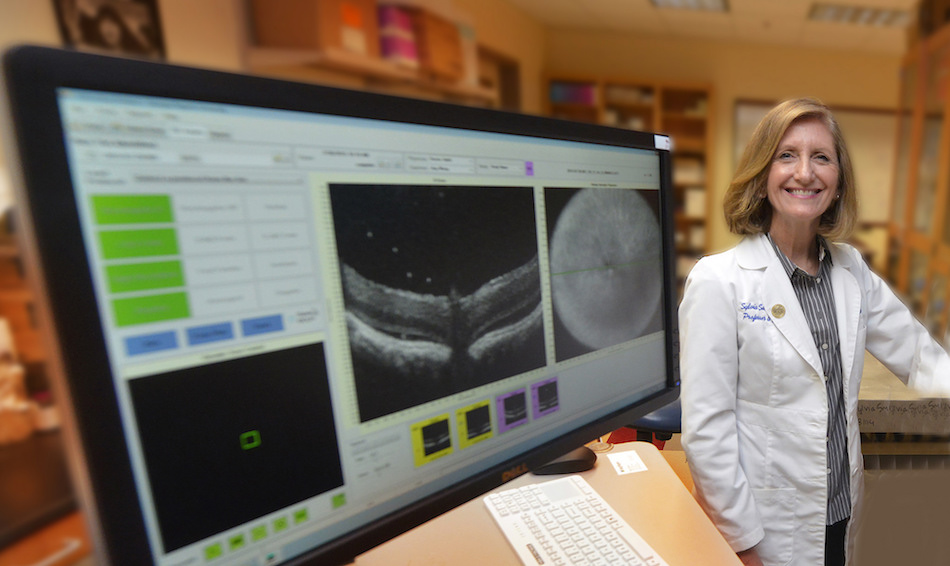 A pain medicine that potently activates a receptor vital to a healthy retina appears to help preserve vision in a model of severe retinal degeneration, scientists report.

Potentially blinding diseases such as retinitis pigmentosa and macular degeneration result in the loss of photoreceptor cells in the retina that enable us to convert light into images.

The study, in the journal Proceedings of the National Academy of Sciences, shows that in an animal model of severe, inherited retinal degeneration, the drug (+)-pentazocine enables the survival of cone cells, a type of photoreceptor cell that gives us detailed, color vision, said Dr. Sylvia Smith, chair of the Department of Cellular Biology and Anatomy at the Medical College of Georgia at Augusta University.

There was a “striking” preservation of cone function in affected mice treated with (+)- pentazocine, said Smith, retinal cell biologist and the study’s corresponding author. In fact, cone function was essentially the same as in normal mice, while vision loss progressed as expected in untreated mutant mice.

By day 42, when vision should have been lost, several layers of photoreceptor cells were still clearly visible in the treated mice and the vast majority of those cells were cones. Mice lacking sigma receptor 1 did not benefit from (+)- pentazocine treatment, more evidence of the receptor’s essential role in retinal protection, Smith said. Treated mice also had evidence of reduced oxidative stress.

While it might not be the drug of choice for patients with these problems, the scientists knew that (+)- pentazocine, a proven pain reliever that appears to have potential as well for improving a failing memory, was a potent activator of the sigma 1 receptor.

While work remains on exactly what it does, overactivating the sigma receptor with the drug likely increases activity of the natural anti-oxidative protein Nrf2, and potentially other mechanisms to better protect cells, said Smith.

They also have evidence that treatment decreases inflammation, which often accompanies oxidative stress, as well as stress on the endoplasmic reticulum, an important organelle that helps the body make, fold and transport proteins including eliminating badly folded ones that don’t function as they should.

“Oxidative stress, especially in the retina, is huge because of light,” Smith said. Photoreceptor cells in the retina convert light into signals that the brain converts to images. But as with most things, too much light is also bad for our eyes, particularly fluorescent light that still permeates many business settings, as well as excessive sunlight.

“The retina requires light as well as oxygen to allow us to see, yet the oxidative environment can be damaging,” Smith said of the metabolically demanding photoreceptor cells. “It’s a tightrope.” In fact, a panel of her peer retinal cell biologists would likely say that oxidative stress is their biggest concern in terms of retinal degeneration, she said. Oxidation occurs when too many free radicals, a natural byproduct of oxygen use, are generated for the eye to eliminate through natural mechanisms and become lethal to cells.

Last summer, in the journal Free Radical Biology and Medicine, Smith’s lab showed sigma 1 receptor’s clear role in a healthy retina. Without it, Müller cells that support the retina can’t seem to control their own levels of destructive oxidative stress and, consequently, can’t properly support the millions of specialized neurons that enable us to transform light into images. Well-organized layers of retinal cells begin to disintegrate, and vision is lost.

The finding also identified sigma 1 receptor as a potential treatment target for major causes of blindness like glaucoma and diabetic retinopathy. Her lab had reported in 2008 how (+)- pentazocine appeared to help the multilayer retina maintain its well stratified form and function and reduced loss of ganglion cells, the nerve cells in the retina that receive information from photoreceptor cells. The outermost layer contains pigment epithelium, which helps nourish the retina, and the next layer is packed with the photoreceptor cells.

Photoreceptor cells also include rods, which are mostly clustered on the periphery of the retina, that enable night or dim-light vision. Rods typically are lost first in retinal degeneration then the cones succumb.

One of the many questions Smith and her team now want answered is how long can cone function be preserved in mice treated with (+)- pentazocine.

Their model is a mouse with a genetic mutation that prompts rapid loss of rods and cones by day 35 of life and is a model of severe inherited retinal degeneration like retinitis pigmentosa. They injected the drug into the abdominal cavity every other day through day 42 of life. Smith and her team now also want to identify the optimal dosage. They also want to better understand how the drug works in this high oxidative stress environment. Plans include also removing Nrf2 from their mutant mouse to further pursue whether that protein is involved in this scenario.

The research was funded by the National Eye Institute and James and Jean Culver Vision Discovery Institute at Augusta University, which Smith co-directs.