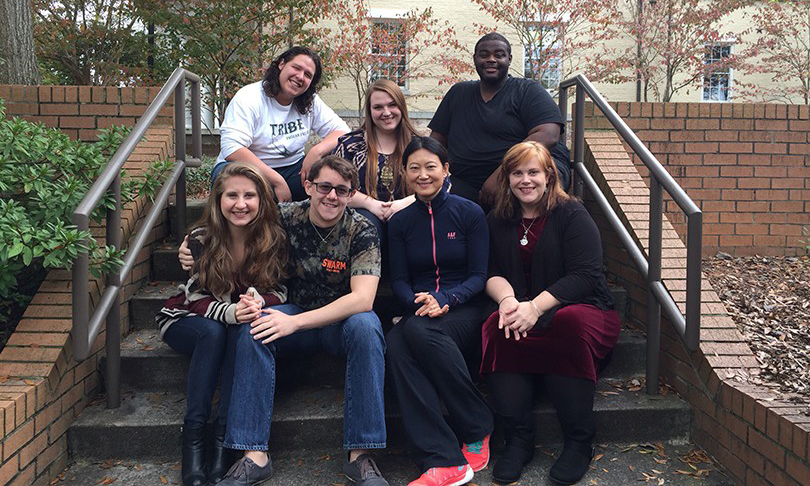 Four months and countless hours of rehearsal culminated in a 10-minute window where performers had one chance to impress the judges.

This was the experience of eight students from Georgia Regents University’s American Opera and Musical Theater Institute, a program within the Department of Music. Earlier this month, these students traveled to Georgia Southern University in Statesboro, Georgia, to participate in the Georgia Chapter of the National Association of Teachers of Singing (GANATS) vocal competition.

The students were separated by age and had the option to compete in two categories, classical and musical theater. They returned home with a combined nine awards. There were three first-place winners, four second-place and two third-place winners.

“We are very pleased that we have so many singers who are at the top of their game,” Tonya Currier, professor and director of the American Opera and Musical Theater Institute, said.

Matthew Cook, junior vocal performance major, began preparing for the competition in August. The first step was determining his repertoire. Cook wanted to pick songs that both matched his voice and that he would enjoy singing.

“If I like the song, I can connect with it more and enjoy singing it, which adds to the performance,” he said.”

The repertoire must also be competitive, which means that it needs to display range, attention to dynamics and articulations and overall good musicianship.

Performers must also assess their strengths and weaknesses when determining repertoire. After several rehearsals, Aryle Pastore, freshman music major, realized she wasn’t ready to compete in the classical division and elected to compete solely in musical theater.

Once the repertoire is determined, each student begins learning notes and memorizing the pieces. In order to do this, each student receives a voice lesson, once a week, in preparation for the competition. Students will also work privately with a pianist. The students are required to sing in Italian, but several languages were represented at the competition, including Spanish, Russian, Italian, German, French and English. As competition day closes in, rehearsals increase. These hours of lessons are in addition to the student’s regular studies.

When the competition begins, performers have 10 minutes to impress the judges. Their goal is to win, but they also anticipate judges’ feedback.

“It’s not just about placing and winning, but they also get comments from the judges,” Currier said. “It’s nice to get feedback to understand why they’ve won or lost.”

Pastore and Cook experienced nerves on competition day, but both believe that the worst part is waiting for the results.

“My heart was in my stomach the entire time,” Pastore said. “You have it in your head that you’re not going to do very well, and you only have 10 minutes to impress the judges. I sang three songs. Then, I had to wait until everyone finished singing to find out who won.”

The months of preparation were not in vain for either performer. When the list of winners was posted, Pastore and Cook both saw their names listed first in their age division, a confirmation that all of their hard work had paid off.

“When I look at results and see that I’ve won, it gives me a sense of accomplishment and affirmation,” Cook said. “It’s no secret that this field is extremely challenging, harsh and comes with a low success rate. When I’m able to accomplish things like this, the little voice that always says ‘can I really do this’ seems to get a little softer.”

Currier believes competitions are a valuable way for students to prepare for their professional career.

“What makes me so excited is that this is how you further a young career,” she said. “When students are successful at these competitions, it can set them apart from other singers and helps them get jobs when they enter the professional world.”

GANATS was open to the public, and many high school students watched the performances. In some ways, the competition served as a recruiting function.

“These young people are incredible ambassadors on behalf of the university,” Currier said. “High school students see the winners and want to know where our students go to school. It’s a huge recruiting and outreach tool for the Department of Music. So, this was a huge win across the board for us.”

Preparations are now underway for the Southeastern Regional National Association of Teachers of Singing (SERNATS). Winners from this competition will move to the finals. Competitors are focusing on improving and changing their repertoire.

“I’m competing in classical for the upcoming competition,” Pastore said. “I’m more confident in my musical theater performances than my classical, but I believe in Tonya to help me get where I need to be. It’ll be a big competition, but I have until March.”

Cook’s goal is to place at regionals and move on to win at nationals.

“I’m feeling confident but focused as I look toward the regional completion,” he said. “This past spring was my first time competing at SERNATS, and I was able to place third and move on to be a semifinalist at nationals. My goal is to be able to place nationally this year.”

Pastore and Cook, along with the other GANATS winners, will be featured in the upcoming production of “The Marriage of Figaro” by Mozart on Valentine’s Day weekend. Opening night is Friday, Feb. 12, 2016, at the Maxwell Theatre. Contact Tonya Currier for more information.

Written by Brennan Meagher
Where I’m From: Karen Brown Pt. 2 of 5
FacebookTwitterPinterestWhatsApp
Front entrance to Pavilion I closed Wednesday