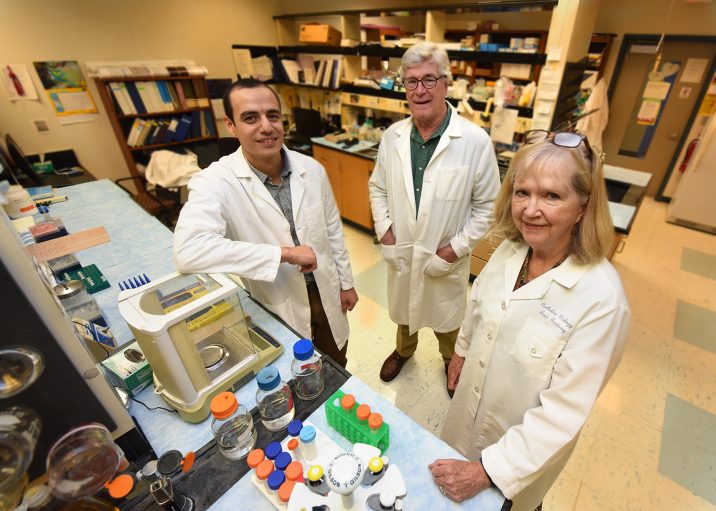 An enzyme known to help our liver get rid of ammonia also appears to be good at protecting our retina, scientists report.

Our retina, which captures light and converts it into neural signals that go to the brain so we can see, can be damaged or destroyed by conditions that reduce blood flow like diabetes, glaucoma or hypertension.

“We are trying to figure out what we can do to ameliorate that damage, to lessen the initial injury, and promote better recovery,” says Dr. Ruth B. Caldwell, cell biologist, in the Vascular Biology Center at the Medical College of Georgia at Augusta University.

Caldwell and her colleagues have the first evidence that the enzyme arginase 1 may do both by suppressing inflammation produced by big white blood cells called macrophages.

Their findings indicate that arginase 1 therapy, which is already in clinical trials for cancer, could provide a novel strategy for this potentially blinding problem, they report in the journal Cell Death & Disease.

Macrophages are known to move in to an area damaged by disease or injury and clean up debris, even consume invaders like bacteria, but they also have a role in regulating inflammation.

M1 macrophages are generally thought to promote inflammation and M2s are more associated with collagen production, wound healing and repair. When inflammation isn’t present, the majority of your macrophages are likely M2s, which make arginase 1, says Caldwell, the study’s corresponding author.

“Basically when we remove arginase 1, the macrophages are more inflammatory, more damaging, and when we add it back, they are less inflammatory, more reparative,” says Dr. Abdelrahman Y. Fouda, postdoctoral fellow in Caldwell’s lab and the study’s first author.

The study was the first to look at the role of arginase 1 in ischemic retinopathy using a common model called ischemia reperfusion injury, in which blood flow is removed then restored, which, like ischemic retinopathy, also induces destructive inflammation,  oxidative stress and resulting damage to neurons and blood vessels.

There are currently no effective therapies for the neurovascular injury of ischemic retinopathy.

For their studies, the scientists looked at normal mice as well as those with arginase 1 knocked out bodywide, specifically from macrophages or from the endothelial cells that line blood vessels.

The import of arginase 1 on retinal health in the face of an ischemic injury was clear both when it was removed and when it was added.

Deleting the enzyme from the endothelial cells had no effect, but without it, macrophages produced a bigger inflammatory response to lipopolysaccharide, a component of the membrane of gram-negative bacteria.

When they administered a more stable but still human grade of the enzyme, called pegylated arginase 1, it reduced inflammation and subsequent retinal damage following reperfusion injury in normal mice.

Pegylated arginase 1 already has been shown to be safe and of some benefit in early trials of advanced and highly lethal liver cancer. In the case of cancer, it appears to reduce the availability of the amino acid L-arginine, which arginase regularly scarfs up and which some cancers must have, so they die, says Dr. William Caldwell, pharmacologist, retired chair of the MCG Department of Pharmacology and Toxicology and study coauthor.

In the eye, while they don’t yet know if adding arginase 1 really converts M1s to M2s, they definitely see less destructive inflammatory response in the retina.

“Let’s just say they behave differently,” Ruth Caldwell says of these immune cells that show up presumably to help. There also are likely other benefits when arginase 1 shows up since it also produces things like polyamines, compounds that are known to be good for neurons, she says.

Like macrophages, arginase has two forms, which also appear to have polar opposite effects. In the face of ischemic retinopathy, when macrophages become pro-inflammatory, they increase their level of arginase 2 and decrease levels of arginase 1.

While nitric oxide is generally considered a good thing, iNOS occurs in inflammation, producing very high levels that can contribute to oxidative stress and illustrating the need for balance, William Caldwell says.

The Caldwells are co-principal investigators on a new $1.5 million National Eye Institute grant that is enabling them to look further at the impact of both arginases when the disease has become chronic and treatment is needed for extended periods as a patient likely would.

They want to know whether in this scenario administration of pegylated arginase 1 also has undesirable effects like raising blood pressure.

As with most things, the impact of arginase 1 is about location, says William Caldwell. Inside the lining of the blood vessels, for example, it’s considered bad because it competes with nitric oxide synthase for the L-arginine it needs to make nitric oxide and keep blood vessels open.

“If in a chronic model we find bad side effects, we may need a targeted therapy to deliver arginase 1 directly to the macrophages,” Fouda says. For their studies to date, the enzyme has been injected into the eye and given systemically and short term, no more than a few hours after the injury.

They also are looking further at the role of arginase 1 in neurovascular injury, whether a major way it protects, as they suspect, is by promoting reparative macrophages, and generally exploring its therapeutic potential.

They also want to know more about the impact of arginase 2, which their previous studies have shown to be a bad guy in ischemic retinopathy, but which is largely unexplored in macrophages in this scenario.

“We think they may have opposite functions and that is part of understanding the whole picture,” Ruth Caldwell says. So they are now looking at what arginase 2 does in the oxygen-compromising disease states retinopathy of prematurity, which occurs in premature babies, as well as high-fat diet models like type 2 diabetes.

They have already shown that following retinal injury, arginase 2 and iNOS levels go up while arginase 1 decreases.

Turkey, peanuts and pumpkin seeds are great sources for L-arginine, which teams up with arginase to help the liver eliminate ammonia, a byproduct of the body’s constant use of proteins that can be lethal if it’s not regularly eliminated.

Ruth Caldwell notes that there are relatively few macrophages of any type in our eyes until damage attracts them. In their ischemia reperfusion model, they think macrophages move in from the blood.

Ruth Caldwell is also a professor in the MCG Department of Cellular Biology and Anatomy and both Caldwells are faculty members in the James and Jean Culver Vision Discovery Institute at AU.