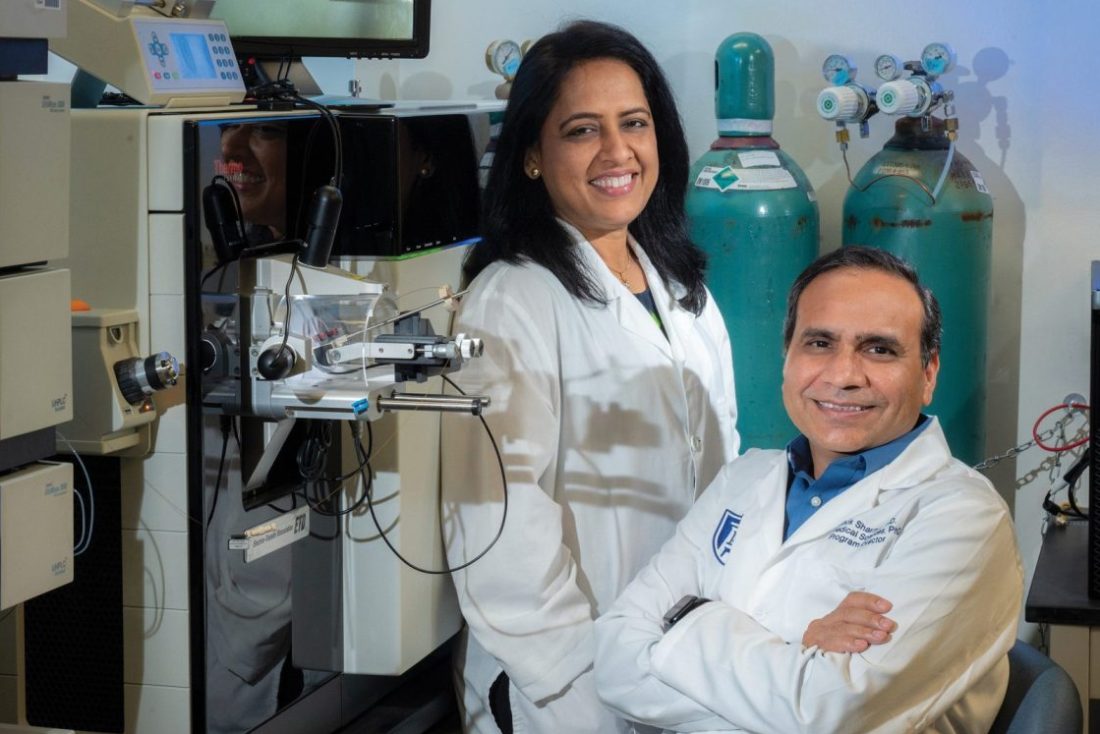 The protective outer layer of our eyes, called the tear film, contains thousands of proteins, which provide clues about wellness and disease, and scientists have fine-tuned what they say is a non-invasive and efficient way to look at those clues.

They anticipate that one day a tear fluid workup could be as routine as bloodwork during a physical exam as well as in diagnosing a myriad of conditions from dry eye disease to Alzheimer’s.

They appear to have cleared a major hurdle to that future, because, while  there are a lot of proteins present, getting an adequate volume of tear fluid to analyze them has been technically difficult, say Drs. Ashok and Shruti Sharma, scientists in the Center for Biotechnology and Genomic Medicine at the Medical College of Georgia and James and Jean Culver Vision Discovery Institute at Augusta University.

Now they report in the International Journal of Molecular Sciences that the same tissue paper, called a Schirmer strip, already placed painlessly against the eye to measure tear production in patients, can also capture a sufficient volume of tear fluid for a detailed protein analysis.

In this case, they are not talking about collecting the tears that roll down our cheeks when we are upset, because those are diluted and not a good source for biomarkers, they say.

Rather the Schirmer strip is placed on the far corner of the eye, away from the tear ducts, for about five minutes until it gets moist with the tear fluid that covers and protects our eyes. At that point, the paper has collected about 10 to 15 microliters (15 microliters is .00050721 fluid ounces) of tear fluid, far less than a drop, says Ashok Sharma, proteomics and bioinformatics expert and the study’s corresponding author.

Next they pair the protein saturated paper with the high-throughput, protein analytics of mass spectrometry to get a clear picture of the proteins present.

Now that they have a technique, their goals include developing a database of the proteins of healthy individuals that will be available free to other scientists working to identify outlier proteins that are biomarkers for disease and pursuing their own studies of the biomarkers for the common and uncomfortable dry eye disease.

“The word is noninvasive,” Shruti Sharma, vascular and endothelial biologist and the study’s senior author, says of the tear fluid collection and analysis method they used to identify 3,370 unique proteins, an average of about 678 unique proteins per individual, in the tear fluid of healthy adults. Among the 50 most abundant proteins were several major families of proteins including immunoglobulins, or antibodies, which help protect the eye from infection, and fibrous structural proteins called keratins, which help form a protective covering for the eye.

“Our findings further our understanding of the tear film by identifying pathways and protein families associated with the healthy tear film and its barrier integrity,” the scientists write.

The method that provided the largest number of proteins and ultimately the most detailed analysis was the “in-strip protein digestion” method in which the Schirmer strip was cut into five pieces that could all fit into a plastic tube for “digestion.” With the other approach, proteins were removed from the strip before “digestion.”

To break up the proteins into peptides, they used two mass spectrometry techniques, including collision-induced dissociation, which uses kinetic energy to prompt a collision with molecules to break the proteins into smaller peptides.

They also used the newer mass spectrometry technique, HCD, or higher energy collision dissociation, which uses a higher level of energy to generate even smaller fragments, so any protein modifications are easier to identify. Disease can modify the protein itself and the number of proteins.

Either way it appeared that it was the protein digestion approach that was most important since there was no significant difference in the number of unique proteins or peptides found by either mass spectrometry technique when this in-strip protein digestion was used with each, the scientists write.

“You have to have confidence that you are extracting every single protein, that the fluid does not remain on the strip,” says Shruti Sharma.

Their findings make the combination of in-strip digestion and HCD the most effective pairing, they say, for future studies of human tear fluid.

They note that the technique began to be embraced by other scientists pursuing disease biomarkers as soon as the study was published online.

Final steps before the approach could be widely applied to humans likely will be development of tests for specific protein(s) that correlate with a specific disease like Alzheimer’s, Ashok Sharma says.

Now the Sharmas are applying to the National Eye Institute for funding to enable the database development of a healthy, diverse group, and propose a representative population of 1,600 to build it. It takes about one hour to run one sample and it likely will take about one year to build the database, Ashok Sharma says.

“We are trying to create a healthy profile of these proteins: What is the range,” he says of their ongoing work at the MCG Center for Biotechnology and Genomic Medicine.

They also are putting their technique to use to objectively diagnose common dry eye disease, including subcategorizing the disorder to be able to identify, for example, those whose painful, dry eyes result from the autoimmune disorder Sjogren’s syndrome, which also produces dry mouth.

Since they completed the published study, they have examined the tear fluid of 82 individuals, half of which have dry eye disease, to begin to find differences that may ultimately become biomarkers for the disease.

They also are comparing the protein profile of the aqueous humor, the fluid inside the eyeball that helps give it shape, and the tear film. In collaboration with MCG ophthalmologists and optometrists, Ashok Sharma has been looking in that larger volume but even harder-to-collect fluid for biomarkers of glaucoma, which despite what most of us may think, is not always clearly defined by higher pressure inside the eyeball. He wants to know if tear fluid and aqueous fluid provide similar clues even though it’s clear the fluids don’t have the same origin.

Advances in mass spectrometry techniques have enabled the Sharmas’ precise but large-scale analysis of proteins with the minute sample the non-invasive collection of tear fluid can provide. They note that some conditions like dry eye disease and cataracts can make tear fluid collection even more difficult.

Faculty in the MCG Department of Ophthalmology including Drs. Lane Ulrich, Amy Estes and Mary Sezer are collecting tear fluid samples for the ongoing scientific studies.

Dr. Wenbo Zhi, an expert in using mass spectrometry to analyze small volumes of biofluids, who also is a faculty member in the Center for Biotechnology and Genomic Medicine, is a study coauthor.

Ashok Sharma says there is likely some overlap in biomarkers found in the tear fluid and the blood we already routinely have examined for indicators of our wellness and potential disease states.

Associations are being made as well between conditions like Alzheimer’s and Parkinson’s and what scientists find in tear fluid. For example evidence of significantly higher levels of the protein tau, the primary component of the neurofibrillary tangles in the brain that are considered a biomarker of Alzheimer’s, have been found in the tear fluid of patients with dementia.

The outermost oily layer of the three-layer tear film slows evaporation of tears and a defect in this layer that slows oil production is a cause of dry eye disease. The middle and thickest layer is the watery layer that helps keep the eyes clean, including washing away debris and preventing infection, and both these layers are produced by glands in the eyelid. The innermost mucin layer keeps the watery layers smoothed out and covering the eye’s surface to help it stay moist, helps nourish the cornea and is produced by the conjunctiva, the clear tissue that covers the whites of your eyes and inside the eyelids.

When you blink, a film of tears spreads over the eye to help keep its surface smooth and clear and to enable good vision, according to the American Academy of Ophthalmology. Dry eyes occur when you don’t make the right tear type or tear film.

Dry eye disease directly affects the tear film and its components, the Sharmas say. Causes include aging; conditions like Sjogren’s syndrome and lupus; staring at a computer screen for long periods or other activities like reading a book that may reduce blinking; using contact lenses for extended periods; and some medications like diuretics and allergy and cold medicine. Dry eyes, which can be painful, itchy and affect vision, are more common in women than men. Insufficient tears can also leave the eyes more vulnerable to infection, inflammation even abrasion.

The published study was funded by a National Eye Institute grant to Ashok Sharma and by an NEI center core grant to MCG and the James and Jean Culver Vision Discovery Institute to support the infrastructure of vision research. Dr. Sylvia Smith, chair of the MCG Department of Cellular Biology and Anatomy, is principal investigator on the infrastructure award.