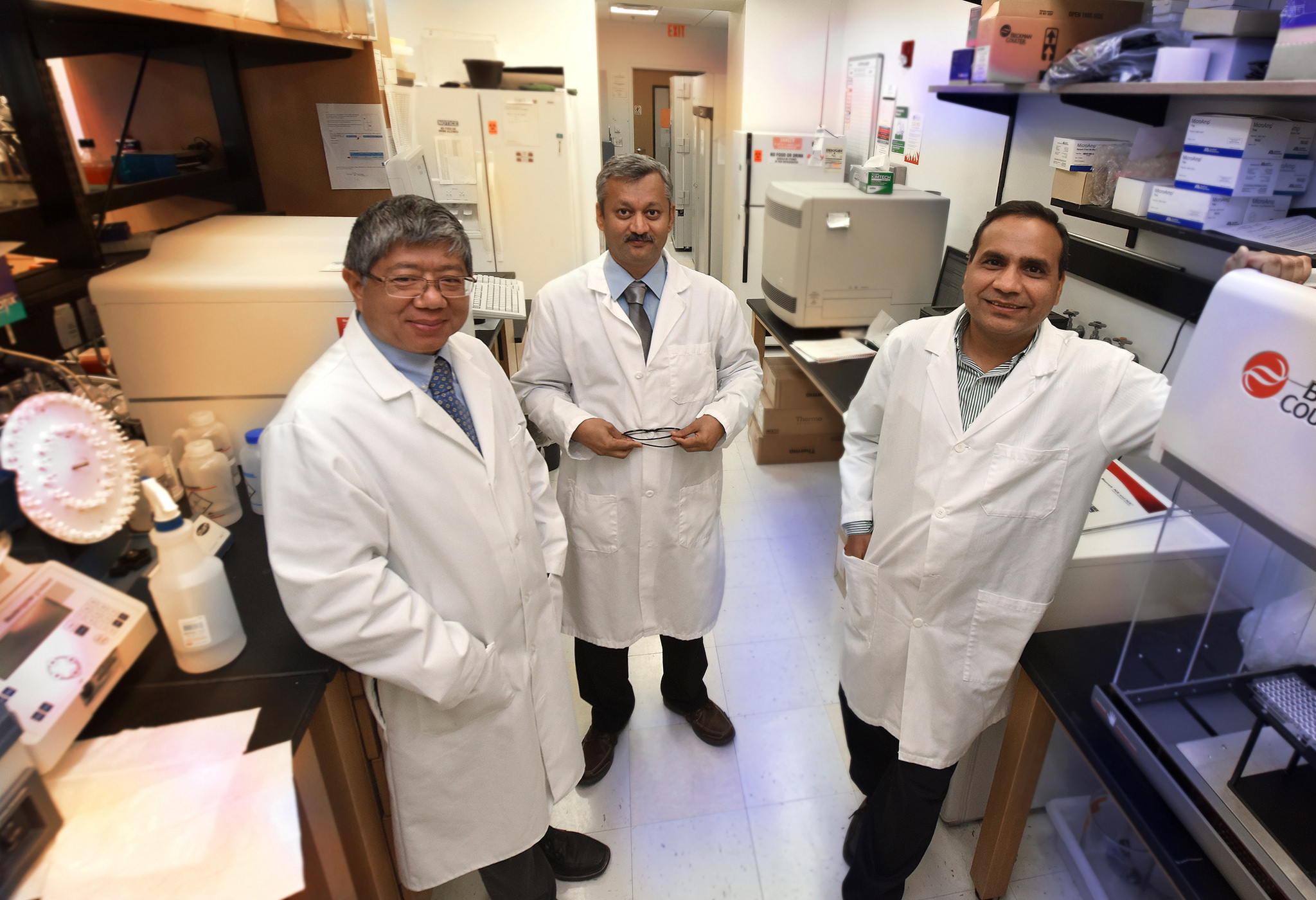 Scientists have developed a way to identify biomarkers for a wide range of diseases by assessing the antibodies we are making to the complex sugars coating our cells.

The new, highly sensitive Luminex Multiplex Glycan Array enables the kind of volume needed to establish associations between antibody levels in our blood to these complex sugars, or glycans, and conditions from cancer to autoimmune disease and dementia, they report in the journal Nature Communications.

“For many diseases that kill us every day, there still are no good biomarkers,” says Dr. Jin-Xiong She, director of the Center for Biotechnology and Genomic Medicine at the Medical College of Georgia at Augusta University and Georgia Research Alliance Eminent Scholar in Genomic Medicine.

Sugar coating on our cells is hardly icing, rather essential to cell health and ours. It helps cells know what other cells to bind to; its adhesive nature even helps them stick to other cells. It can help ensure a negative charge on the cell surface that keeps cell contents inside and provide protection from bacteria or viruses. It helps ensure that the proteins our cells make stay on task. It even helps our immune system recognize our cells as us.

But the sugar coating can also, often inexplicably, become a target for our immune system, which can dramatically alter cell function and lead to disease.

Like our cells, the beads in the new array are sugar coated. By exposing patient blood or serum to them, the scientists can see which glycans the patient is making antibodies against and how much they are making, looking for trends that could predict disease course, even potentially one day diagnose their disease.

In fact, the scientific team led by She has already used the array to identify a potential biomarker for high risk of ovarian cancer relapse following surgery and standard chemotherapy regimens.

“While we think this new test will eventually enable us to do many things, right now we have evidence it can help determine biomarkers for those at risk for relapse from cancer,” says She, corresponding author of the published study.

The ability to quickly look at large numbers of patient samples and glycans is particularly important when data collection is still very much underway to see what it all means, She says.

She theorizes broad-range glycan antibody assessments could one day become part of a routine patient exam, like blood levels of cholesterol and lipids, which provide early clues that something is amiss.

“With this new technology, we can explore what is normal and what is disease. This is just the beginning.”

Glycan antibodies already are routinely used to determine best matches for blood transfusions and organ transplants, but the ability to rapidly look at response to hundreds of glycans at one time greatly broadens their diagnostic and prognostic potential, She says.

Proteins determine cell function and about half the proteins we make are modified by glycans in a continuous and fundamental biochemical process, says Dr. Sharad Purohit, biochemist in the MCG Center for Biotechnology and Genomic Medicine and a co-investigator and author.

Just why glycan antibodies are made is not completely understood. It may be that some sugar we consume prompts our body to make antibodies that also target these complex sugars on our cells. It may be that some glycans coating our cells are just bad and need to be eliminated. But as with other protective, natural body responses – like inflammation – the results sometimes can also be disease-producing. It is clear that the presence of glycan antibodies is bad in some people, She says.

However it happens, it’s the altered complex sugars that change protein function and put us at risk for disease, She notes.

The MCG team and others have early evidence, for example, that some abnormal cells, like cancer cells, have distinctly different sugar coatings, perhaps changed by environmental exposures like foods or toxins as well as family genetics.

She is principal investigator on a new $1.6 million grant from the National Institutes of Health that is enabling another significant expansion in both the volume of patient samples and glycans the array can handle.

Current technology can expand to analyze 500 glycans in more than 1,000 samples daily, but they plan to double the glycan number with the new studies. Previous technology would take a couple of days to look at a large number of glycans, but in just a handful of patients, She notes. The scientists also are beginning to make their array available to other investigators, including providing ready-made glycan beads for use in their labs.

Their first version of the array had magnetic beads coated with 184 different glycans that enabled the simultaneous, rapid analysis of 384 samples of patient blood or serum, says Purohit.

Their published assessments using that assay found that ovarian cancer patients with high levels of antibodies to glycan 11 in their blood, for example, had significantly lower probability of survival. They found glycan 147 also associated with poorer survival, while glycans 54 and 49 were consistently high in all patients.

“This is really about predicting clinical outcome right after treatment for each patient,” says She. “What we want to do is to identify a biomarker that can separate the patients who have a poor versus good chance of survival.”

Those identified with a poor prognosis could early on be considered for additional and/or more aggressive therapy rather than waiting for disease relapse, says She, who is talking with clinicians about clinical trials.

Glycans huge impact on wellness and disease has made glycoscience a major initiative of the NIH, which also supported the newly published study.

The sugar coating on our cells comes in part from foods we consume, like carbohydrates, but our body also makes some sugars that we may not get from our diet.

Purohit and She both have faculty appointments in the MCG Department of Obstetrics and Gynecology.