New target, potential treatment found for unhealthy levels of fat that can occur in type 1 diabetes 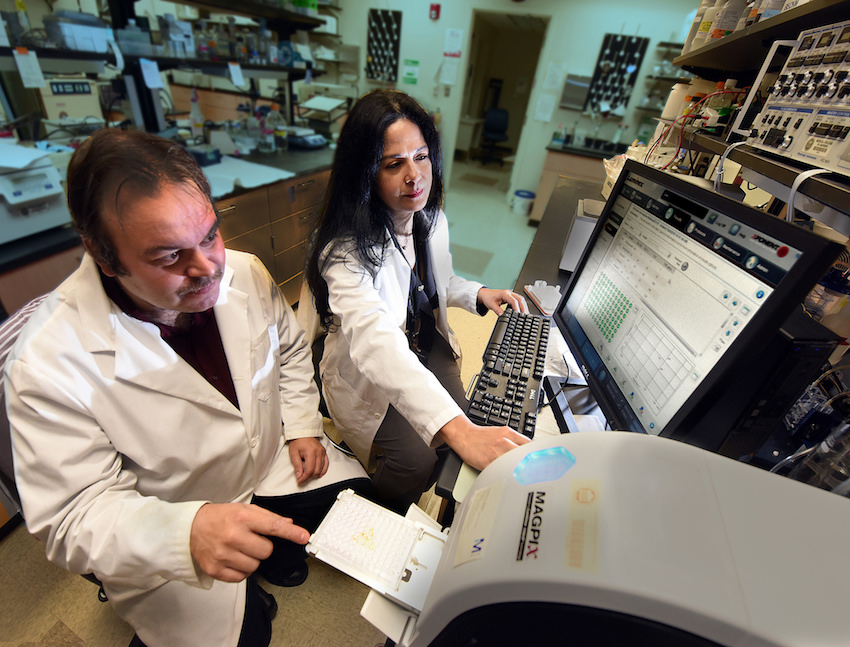 AUGUSTA, Ga. – Researchers have new insight into the complex interchange that can raise blood levels of unhealthy lipids, or fat, in type 1 diabetes, and early evidence that a drug under study to block cancer cell growth can restore healthier levels.

Too much glucose and fat circulating in the blood – and consequently damaging the vascular system and major organs – help make cardiovascular disease the leading cause of death and disability in people with type 1 diabetes, said Dr. Maritza J. Romero, vascular biologist in the Vascular Biology Center at the Medical College of Georgia at Augusta University.

“When you have patients with diabetes, you immediately think about the lipid levels in their blood and how these patients will do in terms of their vascular and cardiac function,” said Romero, co-corresponding author of the study in the Proceedings of the National Academy of Sciences.

While insulin therapy is the standard for these patients, cardiovascular problems persist, said Dr. Rudolf Lucas, also an MCG vascular biologist and study co-author. The MCG scientists in collaboration with colleagues at the Veterans Affairs Medical Center in Miami and the Miller School of Medicine at the University of Miami, decided to take aim at a different, destructive target.

Levels of growth hormone, produced by the pituitary, are high in diabetes, which increases insulin resistance and lipid levels, and clearly play a role in the dyslipidemia, or high levels of fat, in the blood, Lucas said. In fact, growth hormone therapy to help normalize a child’s growth has been known to increase the child’s risk of type 2 diabetes. Growth hormone-releasing hormone, or GHRH, which regulates growth hormone production, also is elevated in type 1 diabetes.

The scientists found that by targeting the receptor for GHRH, they could normalize lipid production in diabetes without reducing normal blood levels of growth hormones, which could be problematic in growing children, who are typically the ones diagnosed with type 1 diabetes.

“These findings expand the therapeutic potential of antagonists of GHRH to diabetes, which affects a significant percentage of the world’s population,” said Nobel Laureate Dr. Andrew V. Schally. Schally, a professor of medicine at the University of Miami and co-corresponding author of the new study, co-discovered GHRH in the 1970s and provided the MCG scientists a new peptide he made, MIA-602, that blocks GHRH receptor action.

It’s in the intestines that potentially problematic lipids and cholesterol are taken from the food we eat and transformed into lipoproteins that can travel in the blood and linger if levels get too high. MCG scientists had found increased expression of this GHRH receptor in the small intestines of their rat model of type 1 diabetes. They began to suspect GHRH receptors were a worthy target.

“We were trying to see the effect of blocking this receptor in terms of dyslipidemia and diabetes complications, particularly vascular function, because blood vessels everywhere are affected in diabetes,” Romero said.

Even without giving their diabetic models insulin, MIA-602 turned around the typically unhealthy and complicated lipid-producing scenario that occurs in the intestines in diabetes.

As expected, the untreated diabetic rats had high fat levels in their blood. In fact, the plasma, the liquid portion of the blood, was uncharacteristically milky. When they treated the rats with MIA-602 three times weekly, the plasma cleared dramatically. When they looked at the intestines, where these super, fat-loaded lipoproteins originated, the usually high expression of GHRH receptors was essentially normalized. Also normalized were levels of lipids, including low-density lipoprotein, or LDL, and very low-density cholesterol, the so-called bad cholesterols. Stabilized as well were levels of apolipoprotein B-48, or ApoB-48, a major lipoprotein used to build chylomicrons, big, triglyceride-rich lipoproteins made out of the food we eat.

“We saw a dramatic reduction in these lipids just by giving the GHRH antagonist, which indicates that this is an important pathway to controlling the hyperlipidemia that occurs in diabetes and, perhaps, in other diseases,” said Romero, noting that GHRH receptors are found throughout the body and have already been associated with others diseases, primarily cancer.

There were other clear signs that MIA-602 was having the desired result. Glucagon is a peptide hormone produced by the pancreas, which has the opposite effect of insulin: it raises glucose blood levels, Lucas said. Glucagon-like peptide-1, or GLP-1, is a short-lived substance made by the intestines, which suppresses glucagon secretion and production of lipoproteins following a meal, primarily by decreasing secretion of ApoB-48. It’s been shown that glucagon and GLP-1 levels are both elevated in patients with type 1 diabetes, which seems counterintuitive, but was a clue that something was amiss with GLP-1 signaling. MIA-602 treatment normalized GLP-1 levels and function and reduced glucagon levels to a healthy normal.

The scientists also got positive results when they directly fed rat intestinal cells a high-fat diet: The cells quickly started producing more fat until they added MIA-602 to the mix, which normalized fat production. They also found more evidence of the important role of the GHRH receptor in the cardiovascular consequences of diabetes. It was known that binding to the GHRH receptor triggers the release of more growth hormones by the pituitary and increased receptor expression. When they gave a GHRH receptor agonist – which increases rather than suppressing the hormone’s action – they saw increased formation and release of lipids even in a laboratory dish.

Ultimately, MIA-602 reduced two indicators of diabetes: protein in the urine, a sign of kidney damage, and the inability of blood vessels to relax, an indicator of blood vessel damage. “This was very exciting for us to see,” Romero said.

Next steps include doing similar lab work on human cells as one way to see if the mechanisms they found in rats hold true in humans.

The scientists note that while some patients with diabetes take statins, which help reduce production and enhance elimination of disease-promoting LDL, most continue to have a significant cardiovascular risk, because, at least one issue statins don’t address is the abundance of fat-rich, circulating lipoproteins from the intestines, Romero said. ApoB-48 and GLP-1 already are treatment targets in type 2 diabetes.

The intestines can build lipids itself in addition to taking them from the food we eat. Ideally, they are used for energy, to help make needed enzymes and hormones, and as part of healthy cell membranes throughout the body. Blood tests done as part of an annual wellness examination on adults, for example, typically look at blood levels of fat as well as cholesterol as an indicator of cardiovascular health.