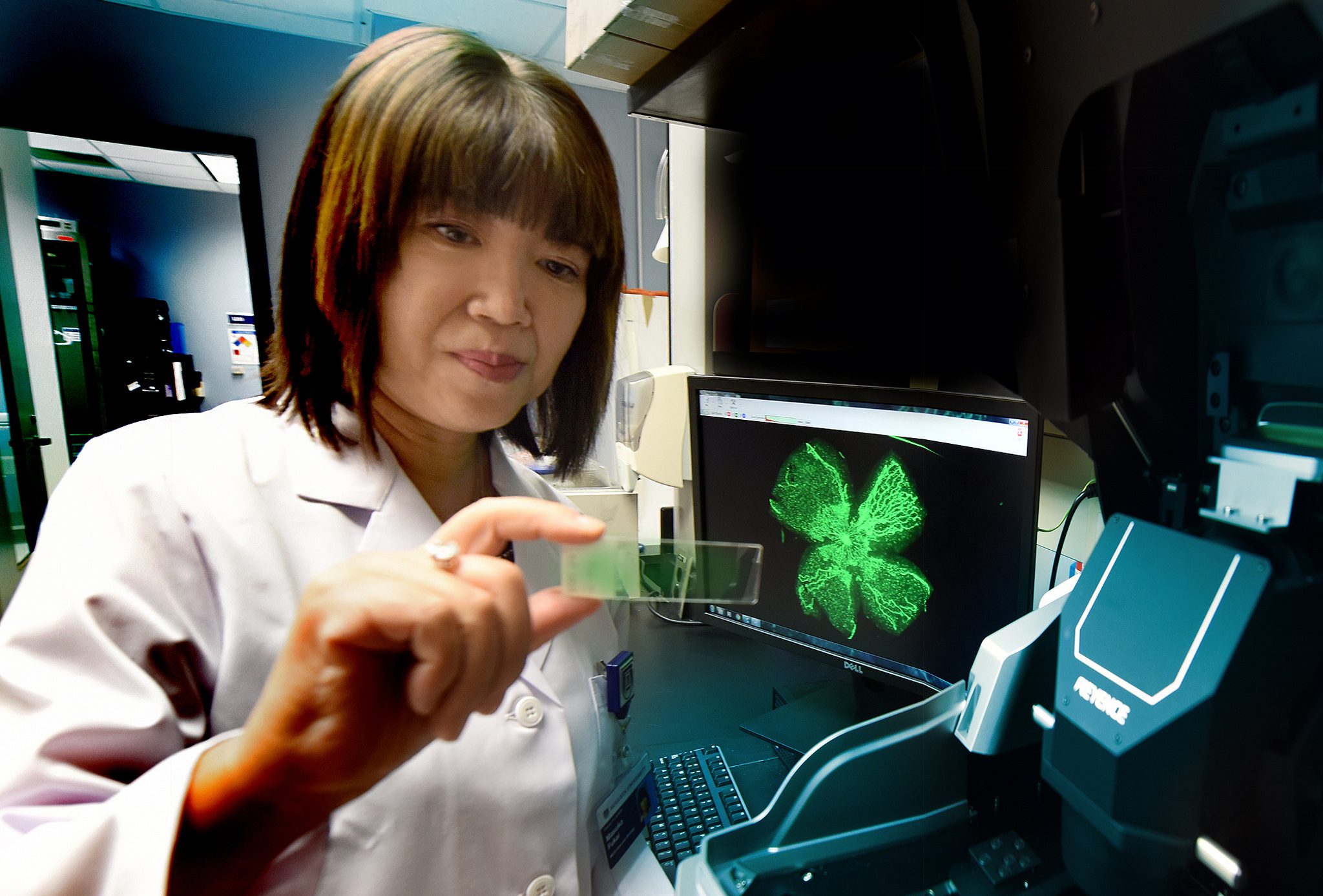 A key enzyme that helps our proteins fold and function properly may also be a good therapeutic target to improve blood vessel health in diseases like diabetes and atherosclerosis, scientists say.

The enzyme is protein disulfide isomerase, or PDI, and scientists have increasing evidence that PDI is essential to the healthy remodeling of the endothelial cells that line our blood vessels and to the production of new blood vessels when we need them. This natural process is called angiogenesis, and it is impaired in diabetes.

“If we know the key mediator causing this, maybe we can target the molecule and treat the problem,” says Dr. Masuko Ushio-Fukai, vascular biologist in the Vascular Biology Center at the Medical College of Georgia at Augusta University.

Ushio-Fukai is principal investigator on a new $1.4 million grant from the National Institutes of Health to further nail down the target and move toward “therapeutic” angiogenesis.

Her starting point is ROS, or reactive oxygen species. Many of us have heard about ROS, mostly that this natural byproduct of oxygen use is bad for us. But at normal levels, ROS has normal functions, which include working as a signaling molecule to promote angiogenesis. Under the stress of diabetes, endothelial cells produce too much ROS so angiogenesis doesn’t work to repair the vasculature.

That’s where PDI one comes in. Ushio-Fukai’s team has shown that while normal levels of ROS activate PDI, high levels found in diabetes inactivate it.

The research team has evidence of ROS’ relationship with one of PDI’s major forms, PDIA1, in both normal and diabetic mice as well as human endothelial cells. They’ve also shown that diabetic mice with reduced expression of PDIA1 have impaired angiogenesis.

The impact of high ROS levels and low PDI found in diabetes resonates even further. They have also discovered that PDI helps regulate the cell powerhouses, called mitochondria, in our endothelial cells.

When they knock down PDI, mitochondria become fragmented. They literally look different and they no longer divide then recombine like usual to increase their energy production. They then found that PDI also regulates Drp1, a key regulator of the fission, which is the splitting that must first occur for mitochondria to recombine.

With the new NIH grant, one of many points of further exploration is that relationship between PDIA1 and Drp1. Questions they want answered include whether together they help keep mitochondria efficiently functioning in healthy endothelial cells and if they could help prevent their fragmentation in diabetes.

PDI activity also effects wound healing, which is known to be impacted in diabetes, with problems like chronic leg ulcers a painful example. In their PDI knockout mice, wound healing is clearly impaired, Ushio-Fukai says, as it is in their animal model of diabetes. But when they inject endothelial cell specific PDI, healing is rescued.

Now they are further dissecting their theory that PDIA1 gets the message to promote angiogenesis from an ROS, like hydrogen peroxide, by activating AMPK. AMPK is an enzyme with a huge array of functions, including serving as an energy sensor for cells to help maintain energy homeostasis. This includes regulating the production and elimination of cell powerhouses and a variety of metabolic functions, including glucose metabolism. Like PDI, AMPK also is impaired in diabetes.

If their findings about these key interconnections continue to hold, they hope to one day deliver more PDI to our endothelial cells via little traveling packages called exosomes, a natural mechanism cells use to communicate and swap contents.

Right now, there is only a PDI inhibitor on the market to treat problems with excessive blood clotting, which clearly would not be useful in diabetes, Ushio-Fukai says.

The endothelial cells that line blood vessels are typically quiescent but with blood constantly flowing over them, it’s not unusual for them to need remodeling, even replacing even in good health. That direct, constant contact with blood makes endothelial cells an early casualty of diabetes.

Endothelial cells can degrade, become leaky, die or even start forming scar tissue, all bad for blood flow. If entirely new blood vessels are needed, vascular smooth muscle cells that form the exterior of the vessels and contractile cells called pericytes that help keep the blood moving also are recruited.

Experience with using antioxidants to decrease ROS levels in conditions like diabetes have failed, apparently because they push ROS levels back down too low and angiogenesis won’t work in that scenario either, Ushio-Fukai says.

Ushio-Fukai also is a professor in the MCG Department of Medicine.