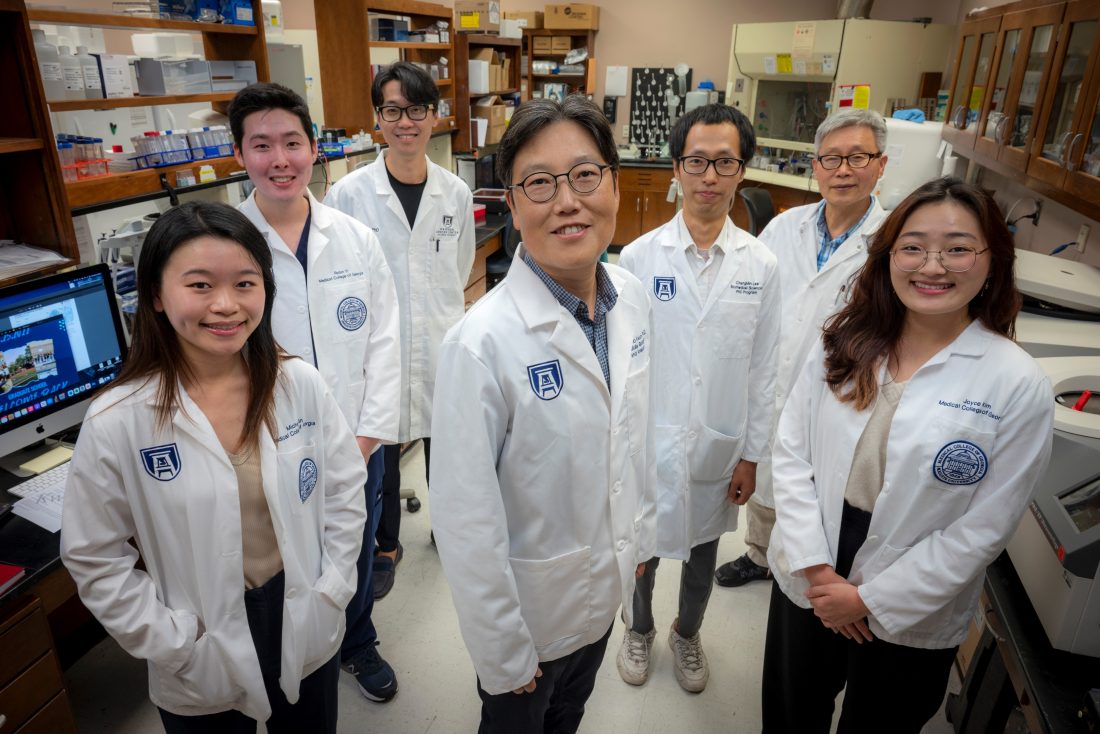 Our cells are constantly communicating, and scientists have developed an efficient way to find out what messages they are sending in protein-packed biological suitcases called exosomes.

These spherical exosomes, which reside in the internal membrane of a cell but will eventually head out to get inside another cell, transport large molecules like proteins, a basic building block in the body and drivers of biological activity, and RNA, which produces protein.

“This is an ongoing process,” says Dr. Sang-Ho Kwon, cell biologist in the Department of Cellular Biology and Anatomy at the Medical College of Georgia at Augusta University, and there is increasing evidence that it occurs both in states of health and disease.

“We are trying to figure out this puzzle of what exosomes are doing in different scenarios,” says Kwon. He is corresponding author of a study in the Journal of Extracellular Vesicles detailing a labeling technique he and his research team have developed to analyze the contents of exosomes from any specific cell type to better understand their role in wellbeing and illness.

“Their contents can help tell us what our cells are telling each other,” Kwon says, and likely provide early clues that we are getting sick and help us better understand how we get sick.

It’s thought that cargo gets loaded early in the formation of exosomes by their precursor endosomes, near the cell membrane, which work much like filling the mail truck at the post office before it heads out on its route. Exosomes will stay there until released by the cell to travel to other cells.

Kwon and his team wanted to catch the cargo early in the process.

Right now, the main way to study exosome content is to first take exosomes out of context, to isolate them, a rather laborious process that can yield inconsistent results. In fact, it may isolate a different type of vesicle, basically biological compartments in our body of which exosomes are just one type.

The MCG team has developed a more efficient method that enables just the contents of exosomes to be studied, and studied where they are.

Their labeling system includes a variant of APEX, or ascorbate peroxidase, which is fused to another protein that is known to seek out exosomes. “APEX is kind of the missile that gets me inside,” Kwon says. APEX has a high affinity for biotin, a B vitamin, which attaches itself to nearby proteins, like the ones the developing exosome carries, labels them and so helps identify them. Biotin also can pass through the cell membrane the exosomes are behind. One more protein, streptavidin, which binds naturally to biotin, enables them to purify and clearly identify the protein cargo as well as the RNA that will produce future proteins, with the help of analysis provided by mass spectrometry.

Kwon’s focus is kidney injury, and they have used their system to show that oxidative stress, a byproduct of the use of oxygen, which is excessive and destructive in disease states, changes the cargo content of exosomes made by kidney cells and found in the urine. For example, expression levels of some proteins changed, and some proteins even disappeared.

Their technique should ease development of databases of the usual content of a variety of different cell types that will enable comparative studies of what happens to their content in different disease states like the kidney injuries Kwon studies, or cancer.

“It turns out that by looking at the exosomes in the urine or blood, and by looking at what is inside, we can tell whether the cell is injured or a healthy cell,” he says.

Their first use of the labeling system was in live kidney cells in culture. They now want to use it in an animal model of kidney disease.

The scientific team says the labeling system additionally can help trace how exosome content changes over time and potentially how cells are responding to treatment in the case of disease.

Exosomes are known to play a key role in cell communication, both between cells of the same type and with other types. Again, there is increasing evidence of the role exosomes play in disease, including sharing with other cells the news that they are sick and potentially even helping spread disease. “It’s not just passing good news. It also passes bad news,” Kwon says.

He notes their cargo no doubt varies in those diverse scenarios, an important reason to be able to detect what exosomes are carrying. Changes may ultimately serve as a good way to monitor response to treatment, another aspect of exosome research that is “exploding,” Kwon says. Scientists also are exploring the potential of using exosomes to actually deliver treatment, by filling these biological packages with medication that can be delivered directly to the desired location.

In fact, immune cells, which are pivotal in health and disease, also are releasing exosomes. These biological compartments also appear to play an important role in taking cellular debris and other trash out of the cells.

“It’s an emerging field, right now,” says Kwon. Proteins are the primary occupant because they can send signals, but they can also bind to other proteins and change their function, he says. RNA can do the same, and tiny microRNA can alter gene expression and consequently cell function.

Kwon’s interest in exosomes was sealed when, as a postdoc at the University of California San Francisco, he grew kidney tubules, which return vital nutrients to the blood and eliminate undesirables in the urine, in a dish and found evidence that exosomes were playing a key role in the changing gene dynamics there.

He calls the focus on exosomes “reverse science,” with most people looking at how the cell changes while he and a growing number of colleagues are looking at the packages the cell is sending out to understand what the cell is up to. While it may not seem like it to most people, he says it’s actually a less complex way to approach cell activity because you are looking at a smaller package with far fewer proteins.