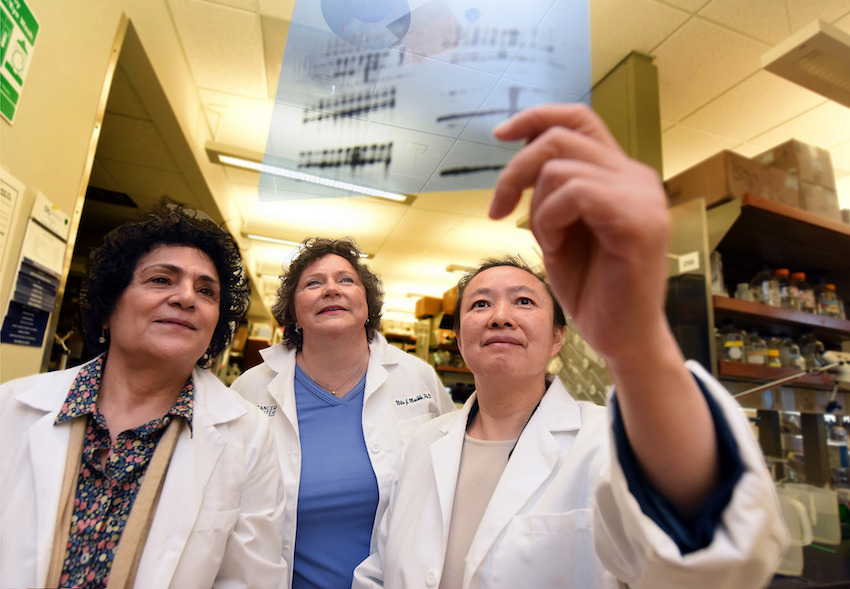 New gene identified as cause, early indicator of breast cancer

AUGUSTA, Ga. – When mutated, a gene known for its ability to repair DNA, appears to instead cause breast cancer, scientists report.

The gene GT198, whether mutated by genetics and/or environmental factors, has strong potential as both as a way to diagnose breast cancer early and as a new treatment target, said Dr. Lan Ko, cancer biologist in the Department of Pathology at the Medical College of Georgia at Augusta University and at the Georgia Cancer Center at Augusta University.

Mutations of the gene are known to be present in both early onset breast and ovarian cancer. Now scientists have shown that the stem, or progenitor cells, which should ultimately make healthy breast tissue, can also have GT198 mutations that prompt them to instead make a perfect bed for breast cancer.

Their studies, published in the American Journal of Pathology, were done on an international sampling from 254 cases of breast cancer in pre- and postmenopausal women.

“This gene mutation can be in both the blood and the tumor tissue of patients, and in the tissue, it’s in high percentages,” said Ko, the study’s corresponding author. “We believe that once this gene is mutated, it induces the tumor to grow.”

GT198, which is also a coactivator of receptors for steroid hormones such as estrogen, is normally regulated by estrogen, Ko said. But once mutated, GT198 can enable tumor production without estrogen. “Regardless of how much hormone you have, it’s out-of-control growth,” Ko said of the resulting classic, rapid growth of cancer.

In a cancerous breast, scientists have seen the problems with the various components of breast tissue but could not fully explain why they happened. The tissue, called the stroma, includes fat cells, or adipocytes, that provide padding; fibroblasts, which make the framework for tissue; pericytes in blood vessels, which are contractile cells that help regulate blood pressure; as well as myoepithelial cells comprising the outer layer of the ductal system through which milk flows.

The new study backs up a few steps and shows that mutated GT198 also directly affects stem cells found on blood vessels that make these various components of breast tissue. “This puts it together,” Ko said.

“It’s a new target in cancer. It’s very exciting,” said Dr. Nita Maihle, MCG cancer biologist, associate center director for education at the university’s Cancer Center and a study co-author. “This tells you that all the different types of stromal cells in breast tissue are affected by the GT198 mutation because they all come from a common progenitor cell.”

The net effect is a tumorigenic environment filled with what Ko calls inappropriate offspring. “Here is a cause-consequence relationship,” she said.

Next steps include pursuing therapies, including antibodies and herb-derived treatments, that target the misguided progenitor cells, instead of only targeting the cancerous breast tissue they produce, Ko said. “We think the way to treat breast cancer is to target the progenitor cells. We want to kill these cells that are feeding the tumor rather than just killing the tumor cells, which is less effective.”

In a 2013 study in The Journal of Biological Chemistry, Ko and her colleagues showed tumor cells containing mutated GT198 protein in the stroma in various types of ovarian cancer, indicating the gene could also be a source for ovarian cancer.

Ko first cloned the human GT198 gene while a postdoctoral fellow at Harvard Medical School, and subsequent studies by her and others have shown it has multiple roles that also include regulating stem cells, cell suicide and turning other genes off and on.

All cells have the GT198 gene but most adult cells don’t express it. In the breast, for example, it may be transiently expressed in a pregnant woman preparing for milk production and, potentially, in the case of breast injury. Males express it in the testes.

Ductal breast cancer, which is in the ducts that carry milk, is the most common type of breast cancer and lobular carcinoma, which begins in the milk-producing glands, is the second most common. Most breast cancer comes from the cells that line those ducts, Maihle said.

BRCA1 and 2, genes whose proteins are supposed to work as tumor suppressors and also repair DNA damage, were the first known risk factor genes for familial breast cancer as well as ovarian and other cancers. About 4 percent of familial breast cancers would include inherited mutations of GT198, which is also considered a causative gene in sporadic cases, Ko said.