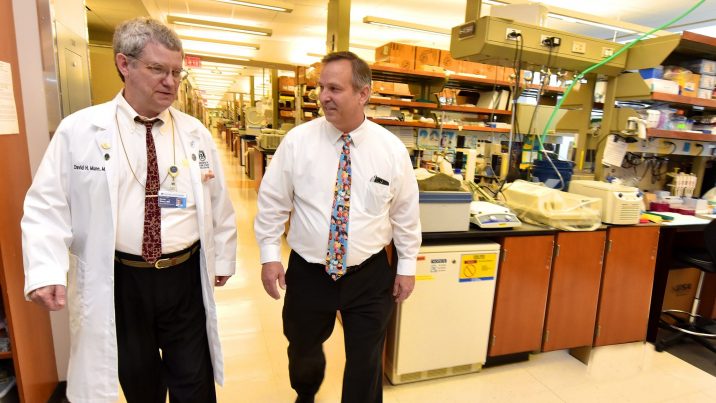 Children with recurrent brain tumors or newly diagnosed, particularly aggressive tumors called diffuse intrinsic pontine gliomas are being enrolled in the first study to examine the efficacy of a drug that inhibits an enzyme these tumors use to protect themselves from the child’s natural immune response.

The study, sponsored by a $3 million grant from the National Cancer Institute, is exploring whether adding an inhibitor of the enzyme indoleamine 2,3 dioxygenase, or IDO, to children’s treatment will enable lower doses of chemotherapy and radiation, better quality of life during treatment and still achieve improved survival for these children.

Lead investigators Drs. Theodore Johnson and David Munn, pediatric oncologists at the Medical College of Georgia and Georgia Cancer Center, have evidence in both laboratory studies and an earlier phase clinical trial that the addition of an IDO inhibitor will enable the child’s immune system to more vigorously attack the tumor.

“It isn’t that the immune system is asleep at the switch and doesn’t know it’s supposed to be attacking,” Munn says. “It’s actively suppressed like that junkyard dog on a chain. The idea behind both the so-called checkpoint blockades being used in adults and now the IDO inhibitor in kids is to remove the brakes from a system that would like to attack the tumor.”

“We also have evidence that the addition of an IDO inhibitor to these children’s treatment will help us reduce the toxicity often associated with aggressive cancer treatment, improve quality of life during treatment and in some cases offer at least the potential for cure,” Johnson says.

Children’s Hospital of Georgia and the Georgia Cancer Center at Augusta University are the primary study site. Children’s Healthcare of Atlanta at Emory University in Atlanta is the second site.

The new clinical trial includes giving the IDO inhibitor indoximod in combination with chemotherapy, and with or without low-dose radiation therapy, in 91 patients with recurrent ependymomas, meduloblastomas and glioblastomas. Standard therapies cure about 60 percent of children with these brain tumor types, and the investigators hope their new approach can help the 40 percent who have recurrent disease.

The trial also will provide frontline treatment to 30 children with newly diagnosed diffuse intrinsic pontine glioma, a brain tumor for which there is no standard therapy considered curative, Munn says. For these children, the trial pairs indoximod and radiation followed by maintenance therapy with chemotherapy and indoximod, with the goal of improved overall survival compared with current approaches, which typically produce only a short-term response.

The investigators also are looking in the blood of the children for biomarkers that indicate whether the therapies are working.

Munn and Johnson have shown that the IDO inhibitor can reposition both the traditional cancer treatment and the immune system to work better against cancer. For example, one way both chemotherapy and radiation therapy work is by killing cancer cells, which releases antigens, foreign substances that induce an immune response, then tumors use IDO to help protect themselves from that response.

IDO suppresses T cells, which can orchestrate that immune response, and promotes activation of regulatory T cells that suppress it. IDO works to manipulate the immune response in a wide variety of scenarios, from tumors and blood cancers to infections to organ transplants.

Adding the IDO inhibitor indoximod to the mix helps standard treatments work better — even at a lower dose — by setting the immune system free to respond as it should.

Children in the study, for example, will be taking a low-dose, once daily chemotherapy pill known to have relatively modest side effects. In their first-in-humans phase 1 trial, which focused more on safety than efficacy, the investigators saw children finish high school, take their SATs and start and do well in college while on the protocol. “You wouldn’t be able to do that if you were getting high dose, intravenous chemotherapy,” Munn says.

To date they also have seen few side effects in children from the IDO inhibitor, likely because tumors are more dependent on the IDO pathways than we are, says Munn. He notes that we have multiple pathways to keep our immune system from getting out of control and attacking our own tissue, so we get autoimmune diseases like lupus, rheumatoid arthritis and ulcerative colitis.

How long the therapies need to continue remains an unknown, although in the earlier phase trial, children remained on the regimen for three years, beyond their expected lifespan. “They will be on the drugs as long as they continue to benefit the child,” Johnson says of the new trial.

The new study compares results in recurring brain tumors with and without radiation therapy because of the reality that sometimes radiation is not an option with recurrence, often because of the location, or because of the cumulative dose the children have already received, Munn says.

“There are two questions really,” says Johnson. “Are the kids who get indoximod going to do better overall than historical controls? And, if we add radiation to that platform, do they do even better?”

Because whether or not to use radiation may not be so black and white, Johnson already has been using lower doses over at least some area of the tumor to not just kill tumor cells directly, but to also work much like an internal vaccine to refocus the immune system on the tumor.

Brain tumors are the most common tumors in children. Diffuse intrinsic pontine gliomas are typically found at the base of the brain, in an area that controls basic body functions like breathing and heart rate. It develops in the brain cells that support neurons, is aggressive and difficult to treat. Their location means surgery is often not an option so treatment includes radiation therapy.

However children with diffuse intrinsic pontine gliomas who have already had surgery will not be excluded from the trial, Johnson says. In the earlier phase of the trial, the investigators found that following the new therapy strategy, some children’s tumors shrank to the point that surgery was an option to improve quality of life and length of survival.

Munn was part of the team that reported in 1998 in the journal Science that the placenta expresses IDO to help protect the fetus, which has DNA from both parents, from the mother’s immune response. They would later find that tumors recruit IDO as well, likely from the immune system itself, which produces the enzyme as part of a check and balance.

Johnson was corresponding author of a 2014 paper in the Journal for Immunotherapy of Cancer showing that at least in an animal model, IDO helps protect glioblastoma from the effects of chemotherapy and radiation therapy and that inhibiting IDO increases the impact of both treatments and prolonged survival. But when they added the IDO inhibitor to the mix, it essentially enabled the immune system to attack the tumor with renewed vigor, slowed tumor growth and significantly prolonged survival.

The next year, Munn and Johnson began a first-in-humans phase 1 trial of the IDO inhibitor in children with recurrent brain tumors. The trial enrolled more than 80 children, and while still analyzing data, Johnson and Munn plan to publish a paper within the year that details more about the impact of the treatment on survival. Preliminary findings indicate combining the IDO inhibitor with standard treatment was well-tolerated, safe and improved overall survival of the children, Johnson says.

IDO has many important jobs, like helping us avoid food allergies and tolerate the helpful but foreign microorganisms in our gut. High IDO expression has been documented in a variety of tumors and the draining lymph nodes and has been associated with poor outcomes.

See details of the trial visit.