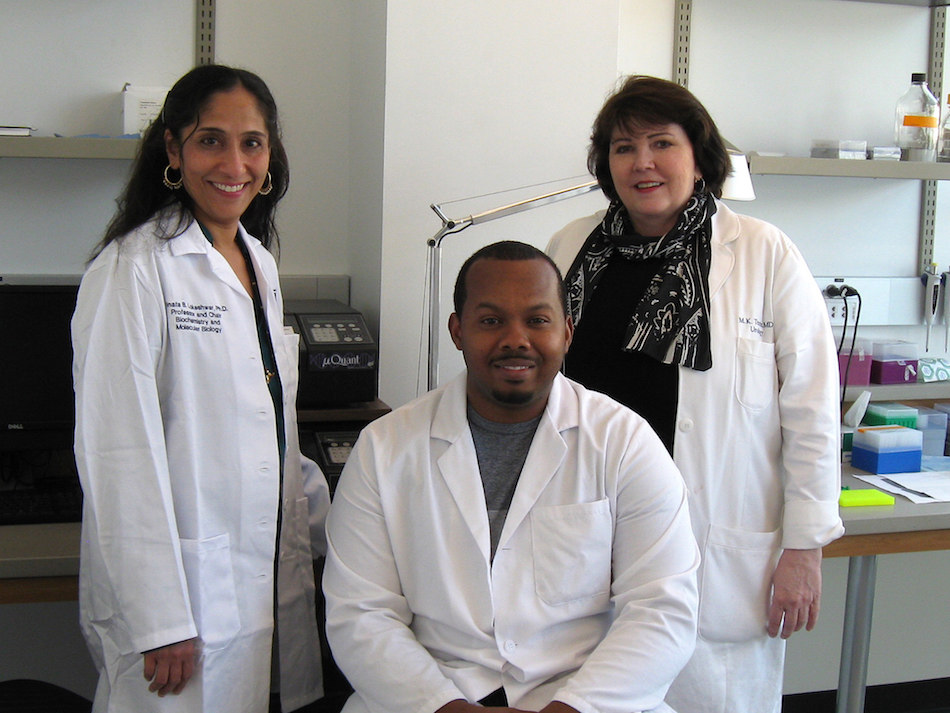 A poorly understood gene that appears super-suppressed in African-Americans with kidney cancer may be a biomarker of a patient’s prognosis and a new target for improving it, researchers say.

Renal cell carcinoma is the most common type of kidney cancer, and African-Americans and males appear most at risk for this disease that can be asymptomatic until it has spread and become highly lethal, said Dr. Vinata B. Lokeshwar, cancer researcher and chair of the Department of Biochemistry and Molecular Biology at the Medical College of Georgia at Augusta University.

“It’s a deadly disease,” said Andre Jordan, a University of Miami graduate student who recently received a three-year, $100,968 fellowship grant from the National Cancer Institute to better understand the function of SLC13A3 in renal cell carcinoma and potentially the racial disparity of disease incidence and gene suppression. Jordan relocated to Augusta when Lokeshwar joined the MCG faculty a year ago.

He and mentor Lokeshwar are studying the gene in their mouse models of renal cell carcinoma. They also are working with Dr. Martha K. Terris, chief of the MCG Section of Urology, to look further at gene expression and function in normal and cancerous kidney tissue in humans.

The team hopes in particular to examine tissues from a large number of African American kidney cancer patients so they can better understand why in their few previous samples, SLC13A3’s expression was suppressed 100-fold in these patients compared to about half that in Caucasians and Hispanics. In their pilot study, the suppression of the gene was also suggestive of which patients with kidney cancer will develop metastasis in the future, which is lethal. Five-year survival rates for patients in whom kidney cancer spread to areas such as the liver and lung are only about 10 percent, Lokeshwar said.

When Jordan first came to study cancer biology in her lab, Lokeshwar asked him to look for the “yin and yang” of genes whose expression is highly decreased in kidney cancer and significantly increased following a new combination therapy she was studying on human cancer cells in her lab.

SLC13A3 emerged as a top player and got Jordan and Lokeshwar logically thinking that it could be a natural tumor suppressor. Little is known about the gene’s function other than it appears to be a transporter of substances like citrate and the antioxidant glutathione, which busy kidney cells use in energy production. Decreased levels of glutathione inside cells, for example, have been shown to increase levels of reactive oxygen species production, which helps fuel cancer.

There is other evidence of the tumor suppressor role. While tumors can and do grow their own blood vessels, particularly larger tumors tend to have low oxygen levels near their center, which they can normally tolerate. However, when the researchers overexpressed SLC13A3 in a hypoxic environment, cancer cells did not survive.

That brings up even more questions, including at what stage tumors downregulate expression of SLC13A3, Lokeshwar said. “Is it after tumors reach a certain size, now the hypoxic condition starts and that is why they silence the gene? We don’t know that,” she said.

So they want to explore the potential multiple and changing roles the gene plays normally and in a kidney tumor. It may even be that tumors mutate SLC13A3 to get its level under control. Others already had provided evidence that higher expression of SLC13A3 can lull normal kidney cells into a state of senescence so they can’t readily grow or divide, which won’t work for cancer cells, Jordan said.

Is it necessary for SLC13A3 to shift its attention away from transporting when it is trying to suppress a tumor? Interestingly, a devious tumor can develop an alternate energy pathway so, as it appears to reduce SLC13A3’s expression, it no longer depends on it for energy. The researchers note that normal cells continue to have and use SLC13A3 for energy in this scenario.

Another reason cancer may want to reduce SLC13A3’s expression is because it makes cancer more susceptible to treatment, including the new combination therapy Lokeshwar was studying when she asked Jordan to take a look at which genes had decreased expression with cancer and increased expression following treatment.

She was looking at the widely used, but not widely successful,chemotherapy agent sorafenib that she packaged with the non-toxic dietary supplement, 4-methylumbelliferone, or 4-MU. Lokeshwar published a study in April 2015, also funded by the NCI, that showed 4-MU, already used in some countries to boost liver health, appeared to slow the development and spread of prostate cancer. She has early evidence that it might also bolster the effectiveness of kidney cancer therapy.

About 50,000 patients are diagnosed annually with kidney cancer, and African-Americans and American Indians/Alaska Natives have slightly increased rates, according to the American Cancer Society.  About 30 percent of patients have advanced disease at diagnosis since the disease tends to be asymptomatic in its early stages, according to the Kidney Cancer Association. In fact, tumors are often spotted in patients having an X-ray or ultrasound of the abdominal region for other reasons, Terris said. Other times, a mass is palpable.

Risk factors include smoking and obesity along with advanced kidney disease and hypertension. However, Terris notes kidney cancer can strike a wide range of age groups and can be very aggressive or comparatively benign, but currently, there is no good way to predict which is which. She is hopeful understanding SLC13A3’s role could help make that important distinction.

Kidney cancer also is associated with von Hippel-Landau syndrome, an inherited genetic disorder in which tumors and/or cysts form throughout the body. In fact, mutations in the VHL gene, already categorized as a tumor suppressor, is associated with kidney cancer, but there are VHL-negative tumors, Lokeshwar said. So as the researchers peruse more samples of patients with renal cell carcinoma, they also are looking at VHL expression and how suppression of one or of both these genes impacts a patient’s prognosis.

Typically with kidney cancer, the diseased kidney will be removed, but normal tissue also can be obtained from portions of that kidney for the studies. Tissues for the new NCI-funded study also are being provided by the Georgia Cancer Center Tumor Tissue and Serum Repository.