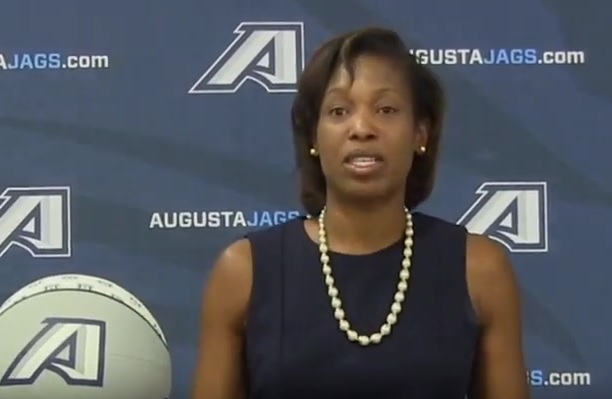 Augusta University Director of Athletics Clint Bryant introduced Millette Green as the next head coach of the Jaguar women’s basketball program at a press conference on Wednesday, July 5.

Green becomes the ninth head coach in the 43-year history of the program and was introduced at Christenberry Fieldhouse in the north mezzanine.

“Augusta University is very fortunate to have a coach join us with the caliber of Millette Green,” Bryant said. “She comes to us with a wealth of experience and noted success in recruiting many parts of the country. She will be a great addition to our university, athletic department, and community. She will also serve as a tremendous role model for our students and young people throughout our area to emulate. We are extremely excited about her joining Jaguar Nation.”

“I’m anxious and ready to get started,” Green said. “This is a busy time for college coaches right now with July recruiting. I have to take care of some things on campus, but I am looking forward to getting out there and recruiting future players to Augusta University. I’ve had at least one conversation with everybody on the team right now, so I have an idea of what we need to do moving forward.”

Green joins the Jaguars after spending five seasons as the top assistant at the College of William & Mary in Williamsburg, Va. With Green courtside, the William and Mary Tribe recorded one of its best seasons in school history in 2016-17. W&M tied a school record with 20 wins, won a CAA Tournament game for the first time since 2009, and advanced to the CAA Semifinals for the first-time since 2001. The Tribe won 11-straight games, which is the longest single-season streak in school history, from Nov. 18, 2016 – Jan. 2, 2017.

Once again Green helped W&M to a record setting season in the 2015-16 campaign. The Tribe raced out to its best start in school history with an 11-2 record, and posted the fourth most wins in school history with 15. For the second straight season her guards set a school record by tying the single season assist record (466). Green saw six student-athletes earn All-Conference accolades in her last two seasons at W&M.

Green helped the Tribe to a record setting season in her second year in Williamsburg. The Tribe racked up 15 wins, the fourth-most in school history, on its way to its first-ever postseason appearance with a bid in the Women’s Basketball Invitational. The Green and Gold had a seven-win turnaround, while setting three school records for assists (466), blocked shots, (143), and blocked shots per game (4.5).Before coming to William and Mary, Green spent three seasons at Fairleigh Dickinson University, where in 2012 she was the associate head coach for the Knights. During her three-year tenure under head coach Peter Cinella, Green was the Fairleigh Dickinson recruiting coordinator.

Prior to her stint with the Knights, Green was an assistant coach at Indiana University-Purdue University-Indianapolis (IUPUI) for two seasons. While with the Jaguars, Green served as the film exchange coordinator during her initial season before becoming scouting and team travel coordinator in her final year. Green broke into the coaching ranks in 2007 as an assistant at Robert Morris University. During her time with the Colonials, Green assisted with recruiting, player development, scouting, film breakdown and analysis and game preparation and strategy. Before beginning her coaching career, Green spent the spring of 2007 as a community relations intern for the Charlotte Bobcats of the National Basketball Association.

Green is a 2003 graduate of the University of Maryland-Baltimore County (UMBC), where she was a member of the women’s basketball team. She received a Bachelor of Arts degree in sociology and an MBA Preparatory Certificate at UMBC. Green began her collegiate career at East Carolina University before transferring to UMBC. She completed her Master of Business Administration and Master of Science in sports management at Barry University in Miami Shores, Fla.