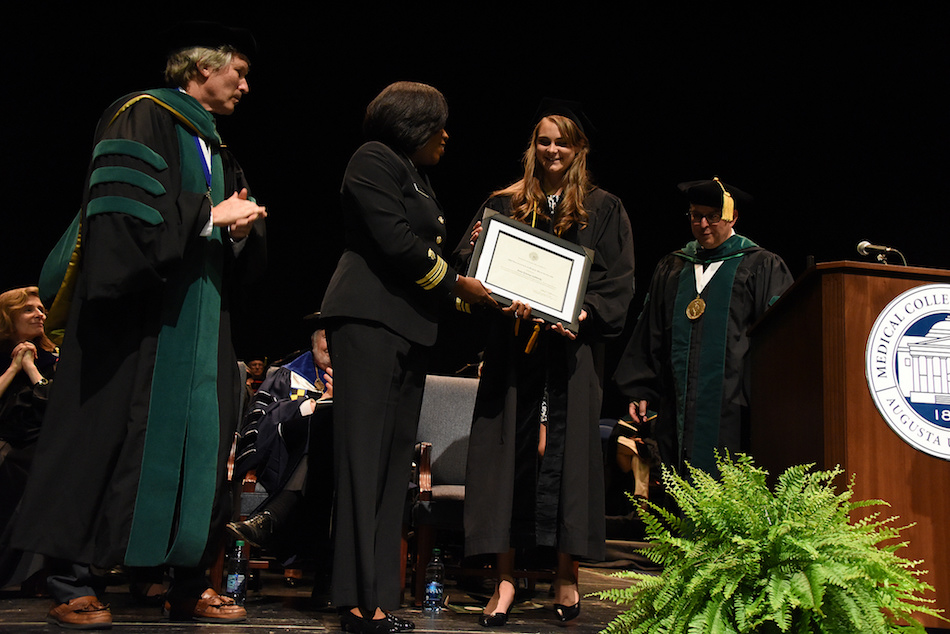 The award was created by the USPHS to inspire medical students to commit themselves to public health and become leaders in the field. It recognizes medical students who show their dedication to public health by making exceptional contributions to the community through initiatives including Healthy People 2020 and the National Prevention Strategy. Each year, every U.S. medical school is able to nominate one student who has worked hard to increase awareness about health care and put that knowledge into action.

Sulimirski was recognized during MCG’s 2017 Hooding Ceremony for her work volunteering in Nicaragua and at several clinics that target the underserved and uninsured in Augusta.

“There are individuals like [Anna], who not only recognize the importance of leadership to herself, but also to her classmates, and thus are strongly motivated to contribute to the well-being of all her classmates as a team leader and team player,” Dr. Greer Falls, associate professor of pathology and associate dean for the medical school’s second-year class, wrote in a nomination letter.

Before entering medical school in 2013, Sulimirski had volunteered in Nicaragua for three summers, initiating weekly puberty and sexual education programs for teenage girls in two rural communities. As an undergraduate at the Georgia Institute of Technology, she also served as the homeless ministry coordinator at the university’s Catholic Center.

“Importantly, Anna actively trained employees of the organization, Amigos for Christ, to continue these presentations in her absence,” Falls wrote.

Back in Augusta, Sulimirski served as a student clinic coordinator for the Eighth Street Clinic, a weekly student-directed clinic also staffed by the MCG Department of Family Medicine that provides medical care to the underserved and uninsured. As clinic coordinator, she provided orientation for student volunteers, organized medical records and logistical support for the clinic and helped raise money for pharmacy gift cards for patients.

“Her incredible work ethic contributes greatly to team dynamics and is an excellent predictor of future success,” Falls wrote.

Sulimirski is a member of the Gold Humanism Honor Society and received the American College of Physicians Georgia Chapter’s Outstanding Student Award for Volunteerism and Advocacy. She will begin an internal medicine residency at Baylor College of Medicine in Houston, Texas, this July.