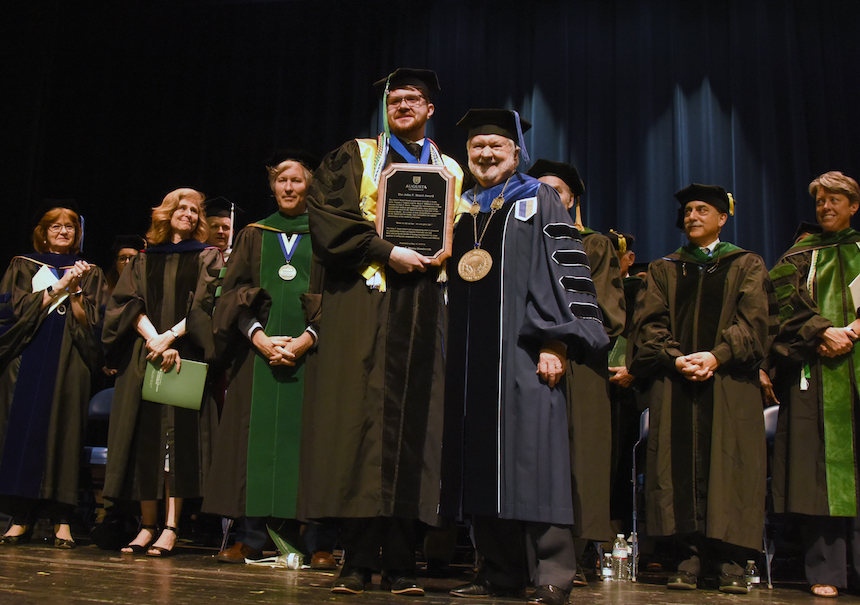 The $40,000 award was presented to Rivera-Bloodworth on May 10 during MCG’s Hooding and Honors Ceremony.

During his time at the university, Rivera-Bloodworth participated in MCG’s Family Medicine Clerkship and helped develop the college’s Complementary and Alternative Medicine Curriculum.

He also worked to close the health disparity gap among Augusta’s minorities by conducting a social media campaign shedding light on health resources available for the LGBTQ community, and he provided care to uninsured Hispanics in the free Clinica Latina. He also served as vice president and board member of the CSRA’s Asociación Latina de Servicios, a free clinic for Latino patients.

While a student at MCG, Rivera-Bloodworth was also pursuing a master’s in Theological Studies at the Church Divinity School of the Pacific and studying Traditional Chinese Medicine, combining his interests in religion and medicine.

His passion for excellence in healthcare made an impression on Dr. William Salazar, Professor of Medicine and Psychiatry and Health Behavior at Augusta University, whose nomination letter states how Bloodworth’s work ethic exemplifies what it means to be a high-quality healthcare provider.

“Seldom do you find a person with the attributes and qualities of Matt, and his level of caring for his patients is inspirational,” said Salazar. “Matt possesses all the qualities necessary for a brilliant medical career, and I am proud to have been part of his educational experience.”

Rivera- Bloodworth is a member of several professional organizations, including the American Academy of Family Physicians and the Alpha Chi National College Honor Society. He received several awards for his work including the U.S. Department of Health and Human Services’ National Health Service Corps Scholarship and being a Society of Teachers of Family Medicine Student Scholar nominee.

The $40,000 annual John F. Beard Award is endowed by William Porter “Billy” Payne and his wife, Martha, to a graduating Augusta University student who exemplifies caring and compassion in health care. Payne, the immediate past chairman of the Augusta National Golf Club, established the Beard award in 1998 in memory of his father-in-law, who died of cancer in 1997. The award honors Augusta University President Emeritus Francis J. Tedesco and Beard’s physician, Dr. Mark F. Williams, a 1988 Medical College of Georgia graduate who treated Beard during his hospitalization at Augusta University Medical Center.