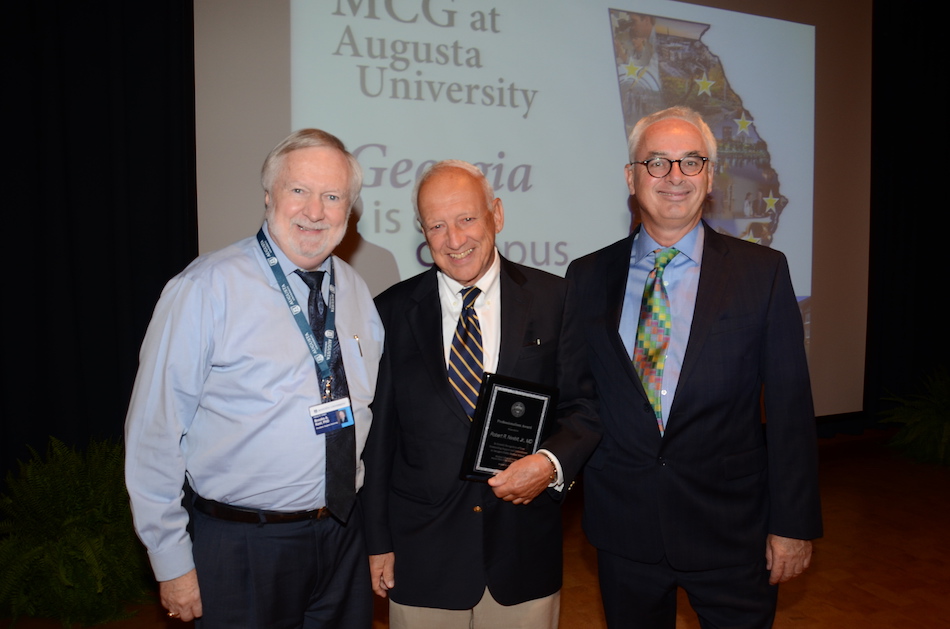 Dr. Mark F. Ellison, a 1982 graduate and past president of the MCG Alumni Association, received the Community Advocate Award during Buckley’s annual State of the College Address Aug. 12. Dr. Robert Nesbit, a professor emeritus of surgery who has been director of the Surgery Clerkship since 2001, received the dean’s Professionalism Award.

“Dr. Ellison has been a tireless advocate for his medical school, both at its home base in Augusta and at the Augusta University/University of Georgia Medical Partnership in Athens, where he was an integral part of establishing a second four-year campus for Georgia’s public medical school,” Buckley said. “And Dr. Nesbit’s 40-plus years of unwavering dedication to the education of the next generation of physicians is truly inspirational to us all.”

Before coming to Athens in 1990, Ellison served as an assistant clinical professor in the Department of Surgery at his alma mater and still serves as a urology preceptor for students at the Medical Partnership. He and his wife, Betsy, are frequent hosts of MCG Alumni Association regional events.

The Augusta native received his undergraduate degree with honors from Wake Forest University. After graduating from MCG, where he was president of Alpha Omega Alpha Honor Medical Society, he completed his residency at the University of Kentucky Medical Center in Lexington and a fellowship at Memorial Sloan-Kettering Cancer Center in New York City. He is certified by the American Board of Urology with a subspecialty certification in female pelvic medicine and reconstructive surgery and is a fellow in the American College of Surgeons.

Nesbit joined the MCG faculty in 1974 and has been actively involved in medical student education ever since. He was chief of Surgical Services at the Augusta VA Medical Center from 1983-95 and chief of the MCG Section of Vascular Surgery from 1994 until his retirement in 2000. He chaired the MCG Student Promotions Committee for seven years.

As clerkship director, Nesbit discovered there was no formal organization of surgical clerkship directors nationwide. He helped found the Surgery Clerkship Directors Committee of the Association for Surgical Education and became the first chair of that committee, which is working to produce a North American surgical clerkship curriculum. Nesbit, who believes all lectures can be interactive, is also involved in a grant-funded project to improve the “WISE MD” Web Initiative for Surgical Education program.