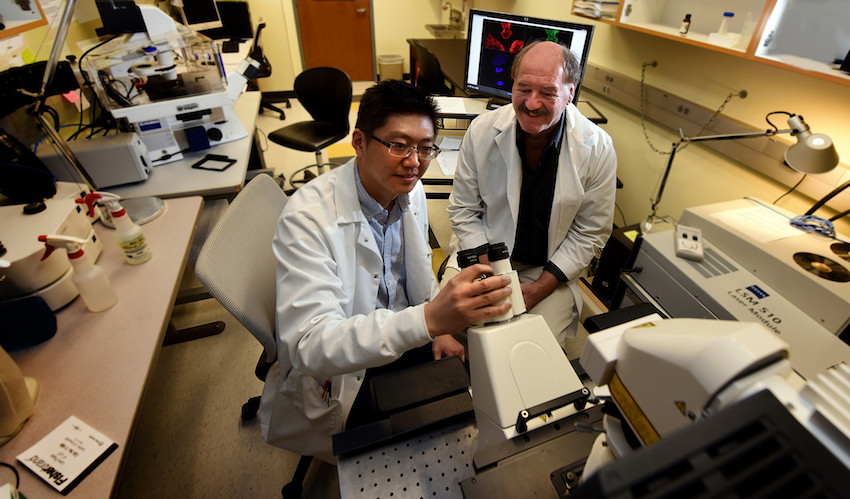 The WASF3 gene helps cancer become mobile and invasive. Manmade peptides that can come between the WASF3 protein and two other proteins that regulate its stability and function, appear to disrupt the intent and ability of aggressive forms of breast cancer to spread to the liver and lungs, they report in the journal Cancer Growth and Metastasis.

“The parent protein is still being made but we are disrupting its function,” says Dr. John K. Cowell, interim director of the Georgia Cancer Center and professor in the Department of Pathology at the Medical College of Georgia at Augusta University.

“We know the process that makes cells metastasize is being impaired,” says Cowell, the study’s corresponding author. “Its function is to promote movement and invasion.”

This is the first evidence of the efficacy of these manmade, stapled peptides in a living model of cancer. His scientific team also has evidence that targeting WASF3 could be beneficial in prostate and colon cancer, and Cowell suspects other common cancers as well.

The scientists note that the peptides did not appear to affect a cancer cell’s ability to proliferate so the primary tumor did not diminish in size. Cowell says that when/if these stapled peptides are used in humans, they likely will be part of a treatment cocktail that includes more traditional cancer drugs and/or surgery that target the primary tumor.

Dr. Eileen J. Kennedy, associate professor in the College of Pharmacy at the University of Georgia, and metastasis expert Cowell collaborated to produce the stapled peptides, which are basically manmade versions of small proteins containing multiple amino acids.

The manmade biologics are designed to compete for binding sites between proteins, in this case between WASF3 and CYFIP1 and NCKAP1, which are both essential for the stability and function of the gene’s regulatory complex. Chemotherapy typically involves much smaller molecules that get into rapidly dividing cells but can’t interfere with these large-surface, protein-to-protein interactions, Cowell says. This more targeted interference also appears to work without obvious side effects.

In their previous work, the team has deleted the WASF3 gene in cancer cells then documented their impaired ability to spread in experimental assays. “But we can’t do that in a person, at least not yet,” says Cowell. His team first suspected WASF3’s role in metastasis when they identified the gene in a child with neuroblastoma in 2002. They suspect the gene is active in a wide range of cancers.

Their latest work was performed in a mouse model of breast cancer using a particularly aggressive form of human breast cancer. It’s called triple negative because it does not have the three most common targetable receptors: estrogen, progesterone, and the HER-2/neu and so doesn’t respond well to most existing therapies.

All the aggressive breast cancers express the WASF3 gene while the low-grade tumors do not, he says. In fact, when they have switched WASF3 on in less-aggressive tumors it has turned up their aggressivity.

“We know it’s related to the process,” he says. “At some point, as a tumor progresses, it switches on a bunch of genes which allow it to metastasize. It’s growing fast and it’s moving into the blood vessels and it’s getting out into distant tissues.”

Right now, one of Cowell and Kennedy’s many goals is improving the efficacy of the manmade peptides, including their staying power in the desired destinations of the tumor and the bloodstream.

“We are constantly tweaking the structure and nature of these peptides to try and get them to last longer,” Cowell says. Their new work indicates the stapled peptides remain in the blood system for about 30 minutes. He’d like them to last more like three hours in the body’s blood flow where so many cancer cells are circulating, further mutating and potentially landing at any one time. Longer time in the bloodstream should also mean more of the peptide gets to the tumor. They found peptides were still present in tumors for 72 hours after a single treatment, but would like to further extend that active presence as well. Mice in this study were given the stapled peptides every other day for four weeks by injection.

The WASF family of genes has three members and WASF1 and 2 are clearly related to wound healing and other processes where cells need to move, Cowell says. Cancer cells don’t start out so aggressive so he reasons that some inexplicably re-express the gene then get selected for survival because they are so aggressive. As the tumor grows, these WASF3-expressing cells become the dominant group of growing cells. But the damage isn’t over in what Cowell calls a “well-adapted survival of the fittest model.”

The growing tumor starts shedding millions of cancer cells daily. Once again, it’s the most aggressive cells that often find their way into the bloodstream – where survival is tough – and make their way to another organ, like the liver or lungs in the case of breast cancer, and establish a presence. Cells will grow rapidly but disease metastasis may surface five years or more after development of the original tumor.

Manmade peptides are already being studied in patients with solid tumors or lymphomas to prevent inhibition of the natural tumor suppressor, P-53, by two of its naturally occurring inhibitors.

Georgia Cancer Center scientists also are looking at small molecules that would inhibit the WASF3 gene in a different way. Their research was supported by the National institutes of Health.