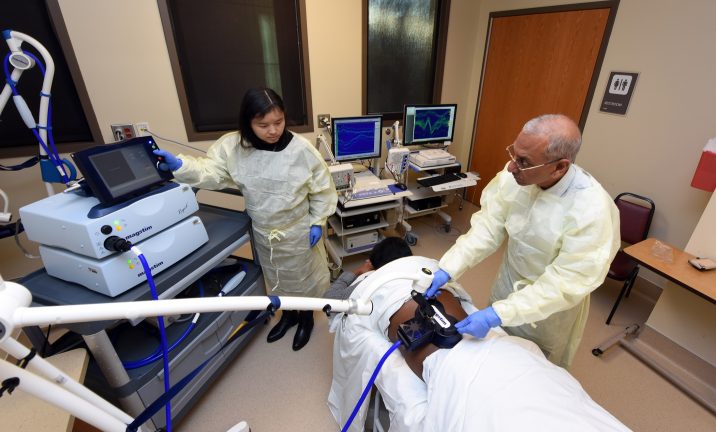 Painless magnetic stimulation of nerves that regulate muscles in the anus and rectum appears to improve their function and dramatically reduce episodes of fecal incontinence, a debilitating problem affecting about 10% of the population, investigators report.

They have early evidence that TNT, or translumbosacral neuromodulation therapy, is a promising, novel, safe, low-cost treatment for strengthening key nerves and reducing or even eliminating episodes of stool leakage, Medical College of Georgia investigators report in the American Journal of Gastroenterology.

“We have identified that nerve damage is an important mechanism in the pathogenesis of stool leakage, and we have identified a noninvasive and targeted treatment to correct the nerve damage and address this pervasive problem,” says Dr. Satish S.C. Rao, director of neurogastroenterology/motility and the Digestive Health Clinical Research Center at the Medical College of Georgia at Augusta University.

“We found there was significant improvement in fecal incontinence across the board,” says Rao, after six sessions of weekly TNT treatment to key nerves, “which told us something is happening with this treatment. There is an effect on nerve function which, in turn, is leading to improvement of symptoms.”

The rectum is the connector between the colon and the anus, where stool exits, and the muscles directly involved in moving feces along then holding it in place until we are ready to go to the bathroom, have been a focal point for treating fecal incontinence.  However current strategies are largely unsatisfactory for at least half of patients because they do not directly address the causes, including nerve dysfunction in the anus and rectum, the investigators say.

Rao and his team decided to take a step back and look at the function of the nerves controlling those muscles. He developed a relatively benign test, called TAMS, or translumbosacral anorectal magnetic stimulation, to look at nerve activity by placing a probe in the rectum and a coil on the back to deliver magnetic stimulation to nerves in the anus and rectum and watch the response. When they found that nerve function was an issue in 80-90% of patients they assessed, they began exploring a similar approach using external, repetitive magnetic stimulation to help heal those nerves.

This first study was in 33 participants, including 23 women, who tend to have more problems with fecal incontinence, and, who were an average of about 60 years old. Age also is a risk factor. They used the same four sites on the upper and lower back they used to test the function of the relevant lumbar and sacral nerves, which are about two inches below the skin, after some surface mapping to find an exact location in each individual.

Patients lie comfortably face down and the machine makes a steady ‘tock, tock’ sound. Treatment lasts 15 minutes to an hour depending on the frequency. The 15-minute version meant, for example, 15 stimulations per second, or 15 hertz, clearly the quickest but, surprisingly, not the most effective frequency for this purpose.

Rather, while all participants derived some benefit, it was those receiving the lowest frequency, one hertz, over an hour who benefited most.

The investigators defined responders as those with at least a 50% reduction in the number of episodes of stool leakage per week. The one-hertz group experienced about a 90% reduction in weekly episodes as well as significantly improved ability to sense a need to defecate and in their ability to hold more stool. Those in the one hertz and midrange five-hertz group also reported the most improvement in quality of life issues.

“We measured several parameters including their leakage events, we measured their nerve and muscle function, quality of life, all of those were measured,” Rao says. Participants also kept stool diaries, with some reporting zero incontinence episodes following TNT.

“It’s still in the early stage, but it’s quite remarkable what we are seeing,” he says.

Like the patients he sees in his practice, study participants had a variety of issues that likely contributed to their lack of fecal control including diabetes, back injuries, hysterectomies and bladder and hemorrhoid surgeries. Childbirth is a common cause of both fecal and urinary incontinence. One of the females in the study had never had a baby, 18 others had vaginal deliveries and three of those also had a C-section, and four others only had a C-section. Eleven of the women with a vaginal delivery had vaginal tears and six had a forceps-assisted delivery.

While they didn’t selectively pick people with nerve damage for the study, the investigators again found that whatever the cause, those with significant stool leakage had problems with delayed and weakened nerve conduction compared to healthy controls.

TNT dramatically shortened the time it takes those nerves to activate the muscle by several important milliseconds, particularly in the one-hertz group, where the response time consistently returned to normal.

“We have always tended to blame the anal muscle as the problem,” Rao says of key controls needed to keep stool contained until we are in the bathroom. But they also know from women who experience muscle tears during childbirth, which is common, that repairing the muscle does not guarantee the woman will not have problems with leakage, he says. Sometimes muscle repair works temporarily, but when you follow up five years later, about half are incontinent, and nearly 90% are incontinent in 10 years, he says. “Ideally you want to treat all the mechanisms that are not working. We have not really approached it like that,” Rao says.

His team suspected their repeated stimulation of the nerves would induce their innate ability to adapt in response to a variety of stimulations, called neuroplasticity, a skill that exists in nerves throughout the brain and body that enables both learning as well as recovery from injury or disease. They had preliminary evidence of this including studies indicating that magnetic stimulation improves neuropathy and pain in a condition called levator ani syndrome, in which patients experience burning pain in the rectal or perianal region.

They suspected high frequency stimulation, like 15 hertz, already used in the brain to treat problems like depression and stroke recovery, would work best, which is why they were surprised to find that the relevant nerves in this case were most responsive to longer periods of low frequency 1 hertz. Rao surmises one reason may be that the nerves that help control defecation are not as active as typical brain cells, although laboratory studies are needed to confirm that theory, he says. He also wants to learn more about underlying mechanisms for how the nerve changes occur with magnetic stimulation and, along with colleague Dr. Amol Sharma, MCG gastroenterologist and a study coauthor, look at its potential in other gastrointestinal motility problems caused by conditions like Parkinson’s disease and the stomach-paralyzing problem gastroparesis.

How long benefits of TNT hold, and how often follow-up sessions may be needed are already being pursued in a larger study of 132 participants now underway at MCG and AU Health System and Harvard University’s Massachusetts General Hospital in Boston, on which Rao is also the project director and principal investigator.

Participants for the published study were recruited from MCG’s adult teaching hospital, AU Medical Center, and from the University of Manchester’s Manchester Academic Health Sciences Centre in the United Kingdom, under the supervision of Dr. Shaheen Hamdy, professor of neurogastroenterology, although all participants were ultimately enrolled at the Augusta facility.

They went through extensive screening to ensure there weren’t other medical problems, like severe diarrhea or inflammatory bowel disease, that could contribute to their incontinence, as well as a host of other serious medical conditions. To qualify, individuals had to have a history of recurrent fecal incontinence for six months that did not respond to approaches like diet modifications and diarrhea medication, and a two-week diary that reported at least one episode of fecal incontinence per week. As part of the study, investigators performed several tests to assess nerve and muscle function, including Rao’s TAMS test, at the start and finish of the trial. They also used TAMS to ensure the participant’s nerves were responding to the stimulation.

The only reported side effect of TNT was some temporary tingling in the treatment area, probably prompted by rejuvenating nerves, Rao says.  He notes penetrability of the magnetic stimulations can be problematic with obesity or in patients with significant scarring from problems like back injury and/or surgeries. He also notes poor nerve conduction likely is a factor in some patients with constipation.

The published research was supported by the National Institutes of Health. 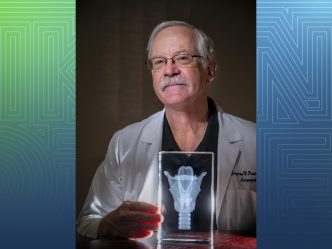 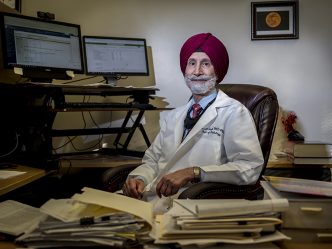