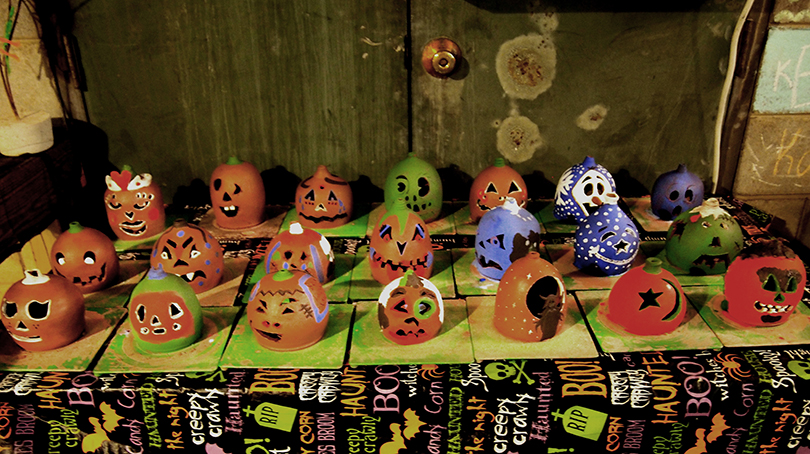 Art can be healing and cathartic. Creativity is good for the soul. This was the concept behind the partnership between Georgia Regents University’s Mad Potters Organization and SafeHomes of Augusta, an organization committed to ending domestic violence through advocacy, awareness and education.

This project was part of an initiative by Mad Potters to create socially engaged art which is a way of using art to both engage the community and address social causes.

“I have an interest in community building and socially engaged art,” Raoul Pacheco, art professor and Mad Potters advisor, said. “I wanted to get the student body, specifically the Mad Potters Organization, motivated to find a project that would do this.”

In order to facilitate this event, Mad Potters members had to attend a SafeHomes orientation. They were trained on topics such as approaching a conversation with an abuse survivor and awareness of themes or words that may be triggers for some women.

Once training was complete, Mad Potters members and SafeHomes clients met at Tire City for an evening of art.

“We began the evening with a meal,” Pacheco said. “At first, the students were kind of standing around, not sure what to do. It was kind of like an awkward moment at a middle school dance. Then, slowly, they started to mingle. They started sharing ideas, getting to know each other, and by the end of the night, nobody wanted to go home.”

Carey Mogianesi, Mad Potters member and apprentice at Tire City, served as one of the middle men between GRU and Tire City and was responsible for gathering clay for the evening. She was also able to attend the event.

“I use art as an escape,” Mogianesi said. “I feel like we were able to provide that kind of experience for the women from SafeHomes.”

Approximately 13 women and children attended the event. The intimate setting gave Mad Potters members an opportunity to connect with their guests.

“I was really nervous at first and was afraid I would say the wrong thing,” Jordan said. “In my mind, I pictured the women as being fragile, but they were actually very strong and open. It was a really great experience.”

At the survivor’s walk, candles were placed inside the pumpkins. They were lit in remembrance of those who lost their lives to domestic violence.

“The pumpkins became kind of a tool of remembrance and awareness for domestic violence,” Pacheco said. “We found a socially charged purpose for these objects.”

After the survivor’s walk, the pumpkins were returned to their creator.

Pacheco believes that Mad Potters has formed a lasting partnership with Tire City and SafeHomes.

In March, Pacheco and the Mad Potters will travel to Kansas City, Missouri, to attend the National Council on Education for the Ceramic Arts (NCECA).  There will be a large presentation at NCECA called Across the Table, Across the Land. It is a panel discussion and digital presentation of socially engaged projects that utilize clay.

The SafeHomes event is one of the featured projects. Students will have the opportunity to present to educators, scholars and experts in the field.

“This conference is important for the students not only because they’re presenting, but because they get to see what’s out there, what’s next,” Pacheco said. “There are graduate programs, residencies and job opportunities. I have two students in graduate school and one in the workforce, and they made those connections at NCECA.”

Mogianesi attended NCECA last spring and is looking forward to the upcoming conference. She is excited that MPO will get to present. The SafeHomes project was well-received by the NCECA organizers, and they are excited to present the project, according to Mogianesi. For her, NCECA is an invaluable experience.

“When you’re in school, you have opportunities, but when you go to a conference, you’re introduced to a large group of people who love clay and all have different techniques and marketing skills that they’re willing to share,” she said. “It can really impact your life and your body of work.”

Pacheco and the Mad Potters hope the forever pumpkins become an annual event. They are also looking to expand their partnership to continue using clay to create socially engaged art. It’s the perfect medium, in Pacheco’s opinion.

“Clay is communal,” he said. “You’re in a studio that’s wide open. Everyone can see what you’re making. You have to share equipment. I like that.”

In order to fund these projects, as well as travel to NCECA, Mad Potters holds a semi-annual sale. Fifteen percent of the proceeds will continue to fund these activities. The next sale will begin Nov. 18. For more information, visit the Mad Potters Organization Facebook page.